At any given point in time, the Massachusetts legislature has hundreds of pending bills making it a challenge for the average business owner to track those which may affect their operations. At the Worcester Regional Chamber of Commerce, we are keenly aware of this and work hard to ensure we are paying attention to those bills and working with partners to support legislation conducive to the business community and fair to everyone involved.

Last year, several laws were passed that had a significant impact on Chamber member businesses. These included the “grand bargain;” an act increasing the minimum wage and for which the Chamber offered numerous roundtables and three seminars on the topic to assist businesses with implementation, large crowds attended each of these sessions; and the “distracted driving” bill that makes it illegal to drive while operating any hand-held device.

EDUCATION: In collaboration with the Massachusetts Business Alliance for Education, the Chamber advocated for Bill S.2412 designed to provide additional funding to schools in districts that serve low income students and to improve funding opportunities for all districts.

TRANSPORTATION: Last August, a report on traffic congestion in the Commonwealth found significant congestion on routes 290 and 9 between Worcester and Westborough during peak travel hours. To build consensus among business organizations, and help guide leaders, the Massachusetts Business Coalition for Transportation was established. Co-chairs Timothy P. Murray, and counterparts from the Greater Boston and Cape Cod chambers of commerce, as well as the Western Mass Economic Development Corp., submitted recommendations to MA House Speaker Robert A. DeLeo and MA Senate President Karen E. Spilka. As a result, an $18 billion transportation bill authorizing funding for a range of projects over the next, roughly, five years was put forth by Gov. Charlie Baker. Said funding would be used to expand the MBTA, reform contract and procurement practices, support congestion-reducing projects, and expand public transit infrastructure. Both the House and Senate will begin debate on this bill within the coming months

The construction of Polar Park, the future home of the Worcester Red Sox, along with the reconfiguration of Kelley Square, has sparked a flurry of interest and activity from new developers across the country. The Chamber was a key factor in bringing the team to the city and, along with fellow members of the city’s Economic Development Coordinating Council, continues to field requests and work with partners to foster interest.

In working toward an 18-hour downtown, and sparked largely by CitySquare and the redevelopment of Mercantile Center, Worcester’s Main Street is on the rise. The Theatre District is also transforming as the Menkiti Group redevelops several buildings with new residential space and ground floor retail. More on that subject can be found on pages one and 13.

The Chamber is proud of our work with the city and others to bring new companies and developers to Worcester and the region. Our collective work has brought an enhanced level of investment and economic activity to Worcester with a number of projects currently underway in various parts of the city.

Now among the top 20 cities with the highest commercial tax rate cities in the Commonwealth, Worcester’s dual tax rate has a negative impact on businesses. Worcester is the sixth highest, and only municipality, in the county with a dual tax rate system.

For the last four years, city councilors have shifted more and more of the residential tax burden to commercial and industrial taxpayers putting Worcester at a competitive disadvantage to surrounding communities. In fact, many are moving in the opposite direction. Last year, Auburn narrowed the gap for the second year in a row, in 2018 Webster unanimously voted to eliminate the dual tax rate, and in December, Fitchburg followed suit effective New Year’s Day 2020.

While some large businesses can, and are willing to, absorb exorbitant taxes, most small businesses have very small profit margins and the commercial tax rate can make or break them. Those who do not own their building often have a “triple net lease” where, in addition to their rent payments, they also foot the bill for utilities, insurance, and property taxes.

The Chamber will continue to advocate for a fair and equitable tax rate for businesses and residents alike. If you have concerns about a policy impacting your industry, please reach out to Alex Guardiola.

Alex Guardiola is the Director of Government Affairs and Public Policy with the Worcester Regional Chamber of Commerce. He can be reached via email. 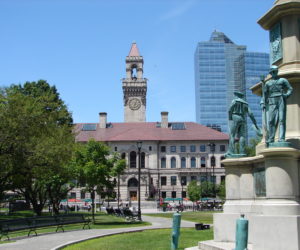