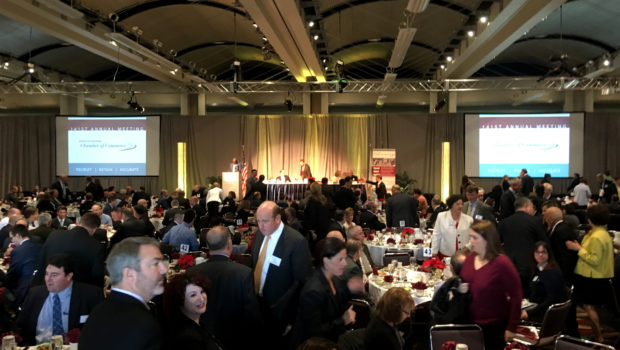 No slides are available in this gallery

Manager speaks to mass development,
says Worcester’s ‘best days are ahead of us’

WORCESTER – It’s no surprise that one top leader behind Worcester’s economic development renaissance is quite successful. City Manager Edward Augustus is the youngest elected official to ever hold office in Worcester. He’s a former federal Department of Education official with the Clinton Administration, chief of staff for US Congressman Jim McGovern, two-term state senator, and director of community relations at the College of the Holy Cross.

In keynote speaker remarks before Worcester Regional Chamber’s 141st Annual Meeting, Augustus reflects on his past two years in office, replacing longtime former manager Michael O’Brien. More than 680 attendees listened to his speech at the DCU Center on Dec. 8, 2016.

“I am fueled by optimism about our city,” Augustus says. “I continue to be driven by the conviction that Worcester’s best days are ahead of us. Two years ago I said, ‘Worcester is the second largest city in New England; let’s start acting like it.’ That’s exactly what we are doing. Those cranes down the street are building a dynamic future for our city.”

Augustus believes Worcester is currently experiencing in terms of development is quickly becoming a model for other cities its size. Augustus provided a broad overview of the many developments underway and soon to be realized downtown during his speech.

Real estate on the rise

The city manager says in the next 18 months, 350 luxury apartments at CitySquare will open. More than 2,000 people will be living in new housing across the city. In the last 18 months alone, 55 new Worcester restaurants opened up. That makes the city the hottest dining market in the state. Hotels are also on the rise, attracting hundreds of jobs downtown. Backing up those investments, which number close to $3 billion invested so far in the past five years, is vast improvements being made to the city’s infrastructure, public safety and programming. That redevelopment is already paying dividends.

This year, Worcester’s average home prices are up 5-8 percent, and rental rates are up 8 percent. The multiple new hotels are being built because the city has consistently maintained an 80 percent hotel occupancy rate. Moreover, nightly hotel room revenues are up almost 30 percent, and city property values have shot up almost a billion dollars.

“Our vision is one with a downtown that is a neighborhood,” Augustus says. “A downtown that does not pack up and head home at 5 o’clock, but a downtown that people return home to. Walking around downtown now, you will notice new streets and sidewalks on Portland, Salem, Franklin, Front, Mercantile, and Exchange streets.”

Next year, the city plans to unveil even more positive change with an $11 million complete overhaul and redevelopment along Main Street. Augustus says this will not just be a simple repaving project, but a complete “re-envisioning of what Main Street is.”

The project development funded by city, state and federal money will include a top-to-bottom reconstruction. Project specs include new streets, sidewalks, ornamental lighting, dedicated bicycle lanes, new brick-banded crosswalks, and public art installations. Augustus says his team envisions a 21st century Main Street that embraces modern urban design philosophies. The changes will encourage parking and walking safely to work and a complete redesign of Carroll Plaza by Hanover Theatre. Southbridge Street will be re-routed in front of the federal courthouse allowing the city to extend the street to the front door of the theater.

Despite the influx of new restaurant patrons and residents, crime is also down across the city. Violent crime is down 8 percent and property crime declined by 4 percent since 2015. “Engagement at the neighborhood level is the key to the success of our police department,” Augustus says. He adds that the city’s new neighborhood police response team contributes to lower crime rates. Moreover, with the creation of a new mounted police unit, Augustus expects that rate to fall even further.

Worcester is also getting in on the green energy economy. Development plans call for construction of the largest municipal solar farm in all of New England on top of the former Greenwood Street landfill. It will sport 26,000 solar panels covering 24 acres or 19 football fields of space. Also, the city is replacing all 14,000 streetlights with high efficiency LEDs. The manager estimates this will save the city more than $50 million over the next 50 years in electricity bills.

“When our new system is installed, our workers will get an email giving them a heads up as to when a light bulb is getting ready to go out,” Augustus says. “We also will be able to calibrate the intensity of the light at any given light pole. So when police tell us they have an issue in a particular neighborhood, we can turn up the intensity of that streetlight(s). Police officers will be able to turn up a streetlight from a smartphone.”

Fitch Ratings has given the city its highest municipal bond rating in history. “That’s four rungs higher than the city of Providence,” Augustus says. “We also maintain strong ratings from two other agencies.”

Timothy P. Murray, president & CEO of the Worcester Regional Chamber of Commerce, explains that he has personally given more than 50 briefings, walks and tours, highlighting the momentum that Augustus outlined. “The collaborative spirit to work through tough issues is a hallmark of this community,” Murray says. “Time and time again that is the refrain we hear from the people that come into this city to work.”

Sharyn Williams December 9, 2016 In the News