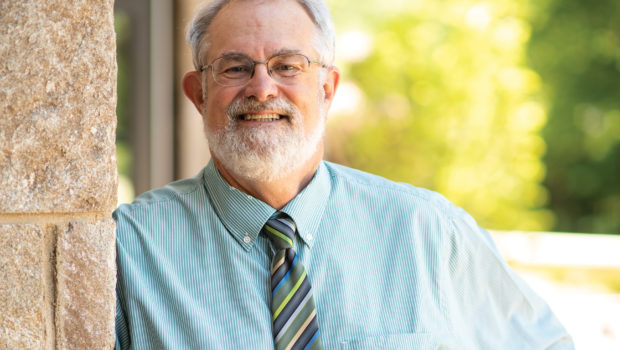 After nearly a decade writing for Alabama-based newspapers and 19 more teaching the next generations at Assumption College, Mr. Land said it’s important to “keep the faith” when it comes to the success of newsmakers and storytellers.

“I still see people fighting the good fight,” he said.

When it comes to protecting independent journalism in today’s culture of non-stop information onslaught and dwindling attention spans, Prof. Land is adamant but concerned.

Questioning the public’s appetite for quality journalism, which often takes time to both produce and consume because it intricately weaves multiple perspectives and facts into one digestable story, he asked: “I wonder if people still perceive the importance of the evidence?”

He advises those interested in seeking out such well-balanced news to discern when their reaction to a story is founded in their own personal opinions and perspectives. If so, he advises those individuals counterbalance that information with coverage inclusive of “the sides of the story that are going to quote the people who annoy [them] too.”

Yes, it is a precarious time for journalism, but Mr. Land says many students are still finding jobs in the industry so long as they are committed to their craft and take advantage of opportunities

“And,” if all else fails, said Mr. Land, “journalism is a great springboard for a lot of [additional career choices].”

Mr. Land chose to dedicate his award to his father, Charles Land. In his acceptance speech, Mr. Land recounted the pride he holds for the man who made his way from paperboy to publisher.

“Over the years,” said Mr. Land in his remarks, “Dad, in his words and in his deeds, instilled the conviction that suspending one’s biases, questioning assumptions, considering sources, and seeking verification of facts weren’t only part of being a good journalist … but also of being a good person.”

Mr. Land, who holds a University of Alabama bachelor’s degree in journalism and a University of Missouri master’s degree and doctorate in English with an emphasis in creative writing, was presented the award at Boston Globe headquarters on May 2.

By Emily Gowdey-Backus, Worcester Regional Chamber of Commerce director of communications. She can be reached via email.