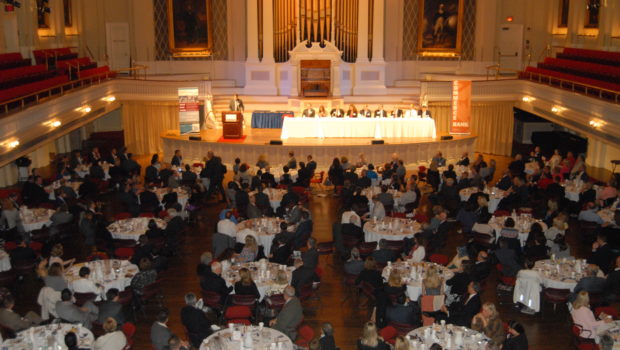 No slides are available in this gallery

WORCESTER – Deborah B. Goldberg, Massachusetts State Treasurer and Receiver General, was keynote speaker during the Worcester Regional Chamber of Commerce’s quarterly Breakfast Club on Sept. 7 at Mechanics Hall in Worcester.

Goldberg is responsible for the state’s cash and debt management, unclaimed property, and chairs state boards and commissions, including the Massachusetts School Building Authority, the Pension Reserves Investment Management Board, the State Board of Retirement, Massachusetts State Lottery Commission, and the Massachusetts Clean Water Trust. In 2015, she established the new Office of Economic Empowerment, the first of its kind in the country, and chairs its Economic Empowerment Trust Fund. Treasurer Goldberg also serves on the Executive Committee of the National Association of State Treasurers.

At the breakfast, the chamber also honored several businesses with Member Salutes, including:

SOUTHBRIDGE/SPENCER – The 2017 Cornerstone Bank merger process is now complete, combining long financial staples of Central Massachusetts communities, SpencerBANK and Southbridge Savings Bank, which have served and supported their customers since 1871 and 1848, respectively.

With more than $1 billion in assets and 200 employees, Cornerstone Bank offers an increased array of products and services and higher lending limits spread across 15 branches with 19 ATMs.

The senior leadership team of the newly merged bank reflects a complementary combination of experience and skill sets. K. Michael Robbins, former President & CEO of SpencerBANK prior to the merger, will now serve as Cornerstone’s Chairman and CEO while Todd M. Tallman, outgoing President & CEO of Southbridge Savings Bank, will serve as President and Treasurer.

“Although our name is now different, our customers will continue to experience outstanding service from the same familiar faces and relationships they have come to know,” says Robbins.

In addition to being the Worcester Railers HC practice facility, the state-of-the-art 110,000 square foot Fidelity Bank Worcester Ice Center will be home ice for Worcester State University, Becker College and top-tier high school programs such as Worcester Academy. It will also host the Junior Railers and Junior

Fidelity Bank has a LifeDesign Banking Center in Worcester at 465 Shrewsbury St. and there are plans to open a second in downtown Worcester in the spring 2018. “The Fidelity Bank Worcester Ice Center is a great example of the exciting revitalization of the city’s Canal District and a terrific way to expand our LifeDesign brand in the market,” added Christopher W. McCarthy, Fidelity Bank President & COO.

SHREWSBURY – Celebrating 25 years in business, Provo Wealth Management Group based in Shrewsbury is poised for even greater success as the firm continues its mission to make all clients feel like the only client.

According to company President and CEO Christopher Provo, the firm remains steadfast in its commitment to partnering with fewer clients for an enhanced focus. “This approach affords our team the energy and time needed to provide quality service and attention to even the smallest details. We seek to know our clients on a deep level. By only truly understanding can we put clients on the right path.

Innovative in its field, Provo Wealth Management Group has clients spread across 30 states and is involved in many charitable and non-profit groups including Becker College, 15-40, Seven Hills Foundation, and the UMass Medicine Cancer Walk. The firm was the recipient of the Best of Business Award in 2014 and 2015.

WORCESTER – Dr. Luis G. Pedraja has begun his tenure as president at Quinsigamond Community College. He is the sixth president in the college’s 54-year history.

Dr. Pedraja became the first in his family to attend college; later earning a Ph.D. from the University of Virginia.

As a child, Dr. Pedraja emigrated from Cuba and grew up in a low

-income Miami neighborhood. He became the first in his family to attend college; and he later earned a Ph.D. from the University of Virginia.

In addition, he has published on higher education issues and best practices, including governance, assessment, strategic planning, and faculty and program development. He taught philosophy, ethics, and religious studies at the University of Puget Sound and Southern Methodist University, where he served as a division chair and faculty senator.

After later becoming a dean and provost, Dr. Pedraja continued mentoring Latino graduate students and served as President of La Comunidad of Hispanic Scholars in his discipline. Dr. Pedraja advocates passionately for increased higher education access for all people, especially those who have been underserved historically

by the American higher education system; and he has been quoted on this topic by media outlets including the Associated Press, Huffington Post, International Business Times, and Univision.

SHREWSBURY – Total Wine & More, the nation’s largest independently-owned retailer of fine wine, spirit and beer, opened one of its newest and fourth stores in Massachusetts on Route 9 in Shrewsbury this past February.

The new store offers more than 8,000 wines, 3,000 spirits, and 2,500 beers. Total Wine & More will feature the area’s most comprehensive and unique shopping experience for consumers looking for the best value and highest quality in wines, spirits and beers – as well as a level of expertise and service unique to Total Wine & More.

The company opened its first Massachusetts store in Natick in November 2015 and subsequently opened additional stores in Everett, Danvers and Shrewsbury. Total Wine & More has supported more than 9,000 charitable organizations with in-kind and cash donations in excess of $6 million which helped those organizations raise over $35 million for their good works.

Staff participate in ongoing training, including yearly company-sponsored trips to Napa and Sonoma Valleys in California and to vineyards in Spain and France every other year.

“Following a comprehensive search process that was conducted by a team of UniBank board members, corporators, and employees, we are confident that Sam Pepper has the knowledge and experience to uphold UniBank’s core values of Teamwork, Integrity, and Excellence, to further strengthen UniBank’s position as the premier bank serving the financial needs of individuals, businesses and communities throughout the Commonwealth,” said Wickstrom.

Pepper comes to UniBank with over 30 years of experience in senior-level banking positions, specializing in lending and operations. Most recently, he was the Executive Vice President and Commercial Banking President for Equity Bank in Wichita, Kansas. His experience also includes work at Enterprise Bank & Trust in Missouri and BMO Harris Bank in Missouri. He holds an MBA in Finance & Economics from Long Island University. He also has ties to Massachusetts as a graduate of Western New England College holding a BSBA degree.

“I am delighted to begin my tenure at such a highly-regarded community bank as UniBank, which is embarking on many exciting initiatives. I am grateful for the confidence that UniBank and its Board of Directors have placed in me to lead the bank forward,” said Pepper.

Pepper takes over from William M. Mahoney, who is retiring after having served as Interim President and CEO since October 2016 and Chief Financial Officer (CFO) for the bank since 2009. UniBank is rooted in the Blackstone Valley with assets of $1.6 billion as of March 31, 2017.

Sharyn Williams September 8, 2017 In the News