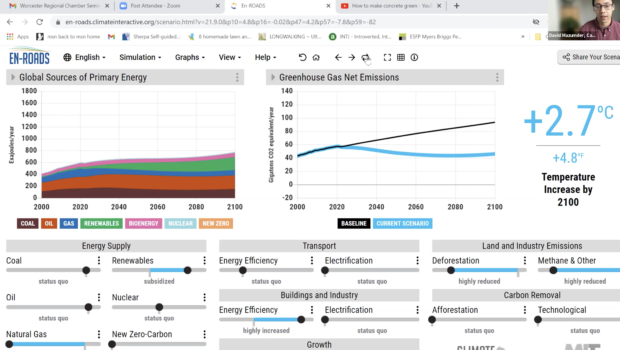 There is no doubt that climate change is one of the most important topics of discussion this year. After the International Panel on Climate Change (IPCC) deemed the climate crisis a “code red for humanity” late this summer, it became clear that the subject would need to be considered in conjunction with all future decisions.

On September 30, the lobby group led a discussion through the Worcester Regional Chamber of Commerce’s Seminar Series, an educational program sponsored by TD Bank. Using the En-Roads simulator, attendees worked together during the seminar to develop a solution to slow global warming. The group worked toward the goal set forth by international climate scientists: avoid warming the planet by 1.5 degrees Celsius by 2100. If the planet reaches this temperature, it’s predicted to be catastrophic for humanity and other life on earth. Therefore, it’s imperative we have dialogues to help people understand the extent of the problem, identify their individual contributions, and develop solutions on both local and international levels.

The En-Roads simulator comes from Climate Interactive, an independent, nonprofit think tank that grew out of MIT Sloan. The simulator serves to help explore options for climate change mitigation and understand the future impacts if we continue with “business as usual.” Because the climate system behaves in ways that make it challenging for people to fully anticipate long-term consequences of decisions, this tool helps decision-makers by modeling the speed and scale of actions and their effects on the climate. This powerful tool is online and free for anyone to use. The simulator looks at variables such as energy supply, transportation, buildings and industry, population and economic growth, land use, and carbon recapture. Participants in the seminar offered solutions for what they thought would be the best ways to slow the warming of our planet.

The results were surprising. In fact, the simulator showed that many of the variables have very little effect on their own, and significant change must occur in conjunction with a variety of steps. It was initially expected that reforestation would help recapture carbon and reduce the atmospheric impact, but this proved to have little long-term effect. Participants were also surprised to learn there was still so much use of nonrenewable energies such as coal and fossil fuels in the current economy.

One participant of the seminar recommended looking at the guidelines set forth by the Green New Deal and to consider how we should change variables based on that. The Green New Deal proposes a rapid transformation of the economy, focusing on renewable energy and an equitable society. By following the guidelines from the Green New Deal, the idea is we would be able to significantly reduce the carbon footprint and prevent a catastrophic heat rise. However, this option is not necessarily realistic, and changes would need to occur incrementally, rather than at a rapid pace.

In the end, it became known to participants that global temperature increase is a solvable problem, but it’s important that change begins now, rather than in the future. If we continue with “business as usual,” we will have a 3.6-degree Celsius increase by 2100, which would be catastrophic for humanity.

The effects of climate change are happening, and we see it every day; weather-related disasters are happening around the globe at an unprecedented regularity. Those that attended the seminar learned that the effects from climate change are happening, and it’s essential to work together to mitigate damage as much as possible. While there is significant risk with transforming the economy, there is also lots of opportunity for positive economic and social change, which can also benefit the environment and secure the longevity of the human race.

The En-Roads simulator is available online and free for individuals to use. If you would like to facilitate a conversation with your organization, you can CLICK HERE to visit the site and determine which group activity is right for you.

Miranda Hotham is the Worcester Green Corps coordinator and an employee of the Worcester Chamber. She can be reached by email here. 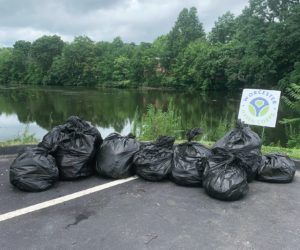 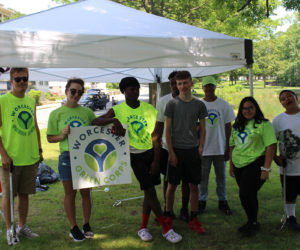 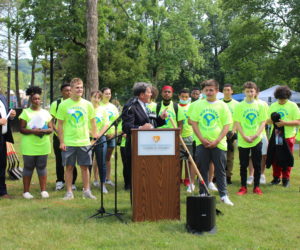