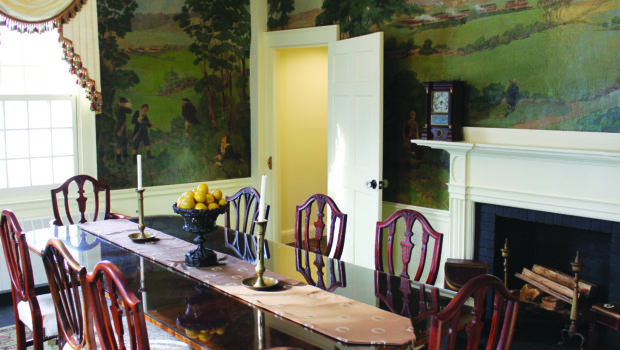 Relocated from Main Street to Park Avenue and now to Mill Street, Stearns Tavern has a new life in a new home. Constructed in 1812 and having served as everything from a bank to a carpet store, the City of Worcester and a band of dedicated volunteers, many of whom are Worcester Regional Chamber of Commerce members, moved the tavern to its latest location at Coes Park on Mill Street in 2016.

This move commenced three years of renovation until it opened to the public in October 2019.

Constructed circa 1812 by Charles Stearns, the building is among Worcester’s oldest. Today, it is one of only two structures in the city that are more than 200 years old.

The project took a large amount of teamwork, but a “true partnership” was developed between Preservation Worcester, Seven Hills Foundation, and the city, said Phil Niddrie, City of Worcester special project coordinator.

“Anytime we can save a building, that’s our goal. [It’s a] benefit to the whole city,” said Megan Blomgren Burgess, Preservation Worcester’s director of education and community engagement.

Of the 132 companies which donated their time and resources to the renovation, more than half are members of the Chamber.

Thanking those members, and all participants, Ms. Blomgren Burgess called the project a “labor of love.” She added, in her time at Preservation Worcester she’s “unaware of another project that [spurred] so much teamwork.”

Hoping to encourage public patronage of the facility, Stearns Tavern is now home to a café and workforce training center run by Seven Hills Foundation as well as an accessible playground. The café is open to the public and features a large gathering spot for meetings or family get togethers. The foundation manages the site at no cost to the city.

On display outside the café is a salvaged piece of metal (see below) representative of the history of the site on which the tavern now stands. Coes Park was once the headquarters of Coes Wrench Company, inventor of the monkey wrench.

The tavern also features a room decorated in federal-era furnishings, the age of the original structure. Antiques placed throughout the facility were purchased locally in Brimfield and Haverhill. While the public can gather inside the building, this room remains roped off similar to a museum exhibit.

Although the first floor has been fully renovated, the second floor, which features a dance hall and residential-style rooms, was left untouched and remains unopen to the public as of winter 2020.

Rebecca Landry is the Marketing Intern with the Worcester Regional Chamber of Commerce. She can be reached via email.