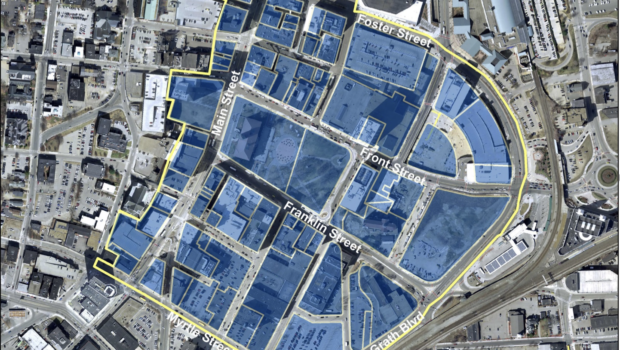 WORCESTER – Multi-million-dollar development was at the heart of a keynote address given by Peter Dunn, assistant chief development officer with the City of Worcester, Tuesday afternoon at the Worcester Regional Chamber of Commerce’s monthly Women’s Information Network event.

Among those properties currently, and soon-to-be, under development throughout the city, and outlined by Mr. Dunn, included:

One aspect of this type of work which often goes unnoticed, said Mr. Dunn is “the cost associated with redevelopment” in a city like Worcester.

Throughout the past decade, he outlined, the city, in partnership with interested development companies, has utilized a multitude of financing tools to change the appearance of the city, invest in the economy, and improve the quality of life for residents. They include state and federal tax credits, historic tax credits, grants, brown field remediation monies, and local investment among others.

In addition, the city continuously identifies commercial property assets – both existing and potential – and analyzes how they can best improve them in order to attract commerce.

“The more uncertainness we can remove from the equation,” said Mr. Dunn, “the more likely [businesses] will be to” choose a Worcester property.

And the city’s efforts have not gone unnoticed. For example, said Mr. Dunn, nine of 11 companies to bid on the Our Lady of Mt. Carmel site adjacent to Rt. I-290 are based outside of Worcester.

Mr. Dunn advised the 100-plus person crowd at the Chamber’s April WIN event to have patience.

“A lot of what’s happening today [began] with building blocks over time,” he said. However, “in order to make those improvements construction is inevitable.” 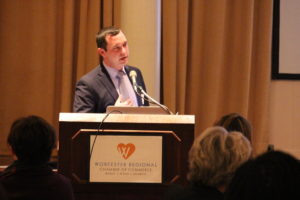 Peter Dunn, assistant chief development officer with the City of Worcester, spoke to a crowd of more than 100 people gathered for the Chamber’s April WIN event. / PHOTO BY CHAMBER STAFF

Underlining the, sometimes, lengthy timeline that comes with multi-stage redevelopment, Mr. Dunn noted that the redesign of Main street is expected to wrap up mid-summer 2020.

The aim, he added, is to “make [Main Street] as walkable and accessible as possible … and we appreciate everyone’s patience.”

One of the city’s major redevelopment success stories is the Business Improvement District.

A vision for much of the downtown area is being collaborated on among business owners through the BID. Approved by the Worcester City Council in fall 2018, on Tuesday, Mr. Dunn announced the appointment of Evelyn Darling as executive director of the BID which operates as a 501(c)(3) nonprofit.

An initial task of the BID administrator will be to launch a crew of ambassadors to help beautify the district and act as a welcome team.

Brooklyn, N.Y.-based firm Streetplus has been hired by the city to choose and train ambassadors who will welcome residents and tourists alike to the downtown sector. These individuals will perform everything from “enhanced litter collection to street sweeping, power washing” and elements of hospitality by providing directions, for example, to pedestrians.

Worcester’s BID is one of more than 2,000 across the globe.

Emily Gowdey-Backus is the Worcester Regional Chamber of Commerce director of communications. She can be reached via email: egowdeybackus@worcesterchamber.org. 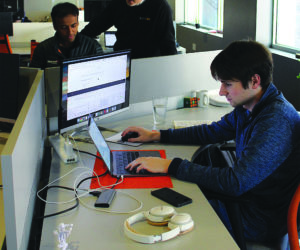