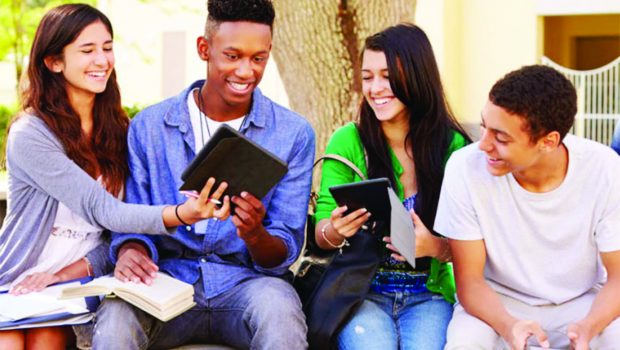 High school students in Worcester represent the possibility of great achievement, not only for themselves but for their families and the community. Yet the road to success is not always smooth or equal because of economic and racial disparities that leave some behind despite their best efforts.

The Massachusetts Early College Initiative is working to increase and equalize the opportunities for success that higher education offers students, along with the economic benefits for the region fueled by an educated, diverse workforce.

Early College programs include classes taken during the regular high school day that are sequenced along specific career paths. Students initially take courses taught by accredited instructors at their high schools before progressing to classes on college campuses, first with other Early College students and then among the general university population. Beyond the specific class instruction, students gain the confidence and skills to smoothly transition to higher education. With Early College offered in each of the city’s high schools, Worcester has more students benefiting from this initiative than any other community in the state.

The Commissioners of Higher Education and Elementary and Secondary Education have reached consensus that the state must increase funding and allocate $7 million in the state budget to expand Early College this school year. The initiative’s results strongly support this enhanced investment.  Strengthening Early College is an effective tool in the recovery process for COVID-19.  The pandemic spurred a decrease in college enrollment among low income students.  Early College has been shown to reverse this trend and must be expanded if Massachusetts is to remain among the top-ranked states for education.

Regardless of a student’s economic background, college can serve as an equalizing factor on the path toward income security. The 2016 median wage income for full-time workers in Massachusetts age 25 and older rose in direct proportion to the level of education attained. Workers with a high school diploma or GED earned around $41,000, while the income of those with bachelor’s degrees increased to nearly $69,000. Graduate degrees resulted in a median wage of about $86,000.

One of the key difficulties students from low-income families face in our economy is the inequity of access to college. Affordability stands out as a major barrier. Early College helps ease this burden. When participating students graduate from high school, they already have significant college credits, which reduces the time – and therefore the cost – needed to obtain a college degree. Fall 2020 Early College enrollment in Massachusetts reached 3,125 students and spring enrollment is forecast to be about 3,500. These students are expected to earn a total of 24,000 credits this school year saving their families $5.2 million in tuition and fees.

National studies show Early College students around the country complete college at double the rate of their counterparts.  Here in Massachusetts where the initiative is still young, the data show equal promise.  Students taking part in Massachusetts Early College programs are enrolling in college at a rate 53% higher than their peers and they are persisting in college at higher rates as well, a strong indicator that they will complete their degrees on time.

In Worcester, only 27% of students from the high school class of 2012 have gone on to earn college degrees. The city has recognized the low numbers as a challenge and answered by becoming the first school district in the state to establish Early College programs in all of its high schools.

Worcester State University and Quinsigamond Community College are committed to working as higher education partners with Worcester schools in this initiative. There are now more than 450 Worcester students enrolled in Early College, with several hundred more earning college credits through similar programs in the region.

The school district and area higher education providers have stepped up. Now they are looking to state leaders to commit to backing their efforts through supporting the budget ask.

The data are clear. Early College is a strategy that is working and worthy of increased support. The initiative is already increasing opportunities for Worcester students, whose achievements will benefit the economic and social stability of the entire region.

Timothy P. Murray is the president and CEO of the Worcester Regional Chamber of Commerce.

This story was originally published in the March 2021 edition of Chamber Exchange: The Newspaper, a quarterly publication of the Chamber. All newspaper editions are archived here.