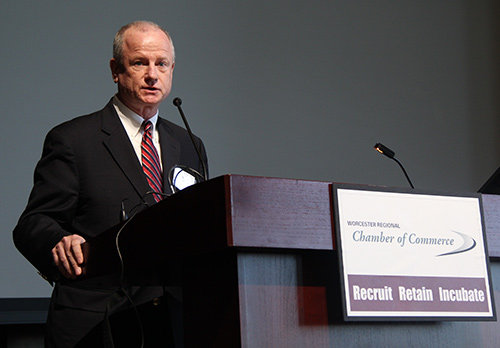 Worcester, MA—Returning to the city a year after his first year, East Coast Hockey League Commissioner, Brian McKenna served as the keynote speaker for the Worcester Regional Chamber of Commerce’s quarterly Breakfast Club on June 8.

“I’m so impressed with what’s going on here,” says McKenna. “It’s an exciting time to be starting a hockey team in Worcester, Massachusetts.”

In 2016, the ECHL approved the Worcester Railers HC as an official member of the league. Just 4 months away from the season opener, the Railers have been working hard to establish itself in the community. “Trax the mascot has made over 175 appearances at local events and schools. The Railers Foundation has donated $135,000 to over 150 local organizations. That’s before dropping the puck and beginning play,” says McKenna. 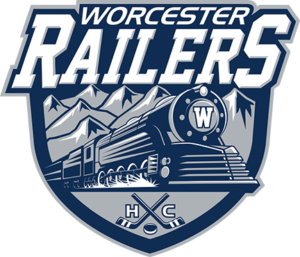 Speaking to a crowd of business professionals, McKenna not only focused on the community involvement of ECHL teams but also the economic impact they bring to their regions. “First and foremost, it’s important to point out that our teams are small businesses. We’re a gathering place for your friends, your neighbors, and your business associates,” says McKenna. The direct economic impact of ECHL teams ranges from a few million dollars to $15 million. In addition to this revenue, special events generate large economic impact in a short time frame.

The commissioner also went on to highlight the promotional and fundraising opportunities that come with having a professional hockey team in the area. “Have an event that you want to publicize? What a better place to do it than in the arena.”

Aside from publicity opportunities, businesses can benefit from the Railers presence in other ways as well. Perhaps the most obvious benefit is the amount of people that are drawn to the games. “Think about it, if 20% more, 30% more, 50% more people came to those games, what impact would that have on your business and community? It increases traffic for everyone,” says McKenna as he convinced the crowd to get involved with the organization.

Another benefit that will come with having a professional hockey team in the city is leverage for business recruitment. “When attracting new businesses, one of the things they’re looking for in terms of being able to attract young employees, is what’s going on in the city. Is there a vibrant entertainment district? Is there an arena? Are there events to go to? One of the things a professional hockey team will do is attract people to the DCU Center and provide entertainment options,” says the commissioner. “If the team is successful and drives traffic into downtown, then the team will have the opportunity to give back to the community through youth hockey, schools and charitable organizations.”

As Worcester continues to develop and thrive, having an ECHL team in the city will not only provide entertainment, but it will contribute to the overall economic development and will serve the community. “This is a vibrant community; I really like what’s going on here. I can’t wait to get back here in October to drop the puck and see the first season be kicked off.”