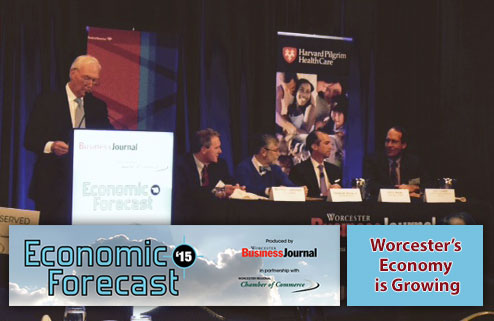 At the Economic Forecast on Fri., Feb 13, just in time for Valentine’s Day, an audience of 200 business professionals listened to a forecast that was sweet than it’s been in several years.

Chamber president and CEO Tim Murray reported on changes since last year’s Economic Outlook Report was unveiled at the 2014 Forecast event. Findings included a population increased for the City of Worcester of 1 percent with both the average income and rental housing units up 5 percent. Job growth increased by 5,762 jobs with a significant number in professional, scientific, management, arts and entertainment, food service, and recreation.

Jeff Fuhrer, executive vice president and senior policy adviser for the Boston Fed, predicted that the U.S. economy will experience continued economic growth to the tune of  2.5 percent to 3 percent this year. Additionally, he estimates that the unemployment rate will drop to around 5.25 percent, down an additional .35 percent.

Bradley H. Johnson, vice president and general manager at Saint-Gobain Abrasives North America spoke about the company’s commitment to Massachusetts noting that their largest investment in research and development was right in Central Mass. at their Northboro facility. As to some of the benefits of doing business in the region, Mr. Johnson spoke about the availability of a highly educated workforce, the attractiveness of the region as a place to live, and the long history of manufacturing in the region. Challenges exist as well. They include the high cost of living; high corporate taxes, including unemployment insurance; and transportation – including public transit.

Timothy M. Warren, CEO of The Warren Group and publisher, Banker & Tradesman, an expert on the housing sector, reported that Worcester did slightly better (down 1percent) than the rest of the state (down 2 percent) on home sales. At its worst level, the region was 20% below its highest housing costs. In recent years, it has bounced back to about 7 percent below the 2005 peak.

The last panelist to speak was Erik G. Wexler, CEO of Tenet Healthcare’s northeast region, and former CEO of Saint Vincent Hospital, one of the facilities owned by for profit Tenet. Faced with rising costs and a lack of skilled workers, the industry is working with business and higher education to look for ways to reduce the impact to the community.

New Chamber services including an interactive map of development projects, the career fair, InternHub and other business recruitment activities are in the works to help ease some of the challenges to business.