Forging Her Own Path: Haddad Grows Spice Co. from the Ground Up - Worcester Regional Chamber of Commerce 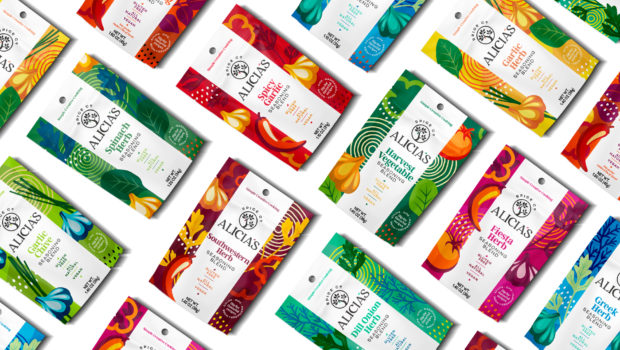 Forging Her Own Path: Haddad Grows Spice Co. from the Ground Up

From the time she could walk, Alicia Haddad has been playing and experimenting with recipes. At a very young age, she began cooking, baking, and canning in the kitchen with her grandmother, Leta. That bond between family and food flourished into what would eventually be the foundation for Ms. Haddad’s own business.

Over the years and by process of elimination, Alicia became aware of her varying intolerances to many products containing high levels of gluten, sodium, sugars, dyes, anticaking agents, and bone char. These allergies, sensitivities, and strict dietary needs made it hard to find spice blends she could use when cooking.

Recognizing this void that existed in options for flavorful and healthy seasoning blends on the market, she embarked on a journey to become the solution to her own problem—which she figured must be a problem for many others, too.

In June of 2015, Ms. Haddad founded Alicia’s Homemade, a spice company with the mission to provide recipes that are healthy, wholesome, all natural, gluten free, kosher, keto, vegan, and low sodium.

“I wanted to create and manufacture products that were different and far superior to other brands. No hidden ingredients, no hidden agenda,” Ms. Haddad said.

Now, almost seven years later, the independently owned and woman-owned spice manufacturing company has recently undergone a brand refresh, with a name change to Alicia’s Spice Co. and the introduction of all-new packaging and label designs. Ms. Haddad’s branding can be described as fun and colorful, as evidenced by the bulbs of garlic, peppers, and tomatoes decorating the packages. Of this vibrancy, Ms. Haddad says: “It’s just a pure reflection of who I am in my core.”

“What the consumer sees on the packaging is exactly what they are eating. Never will you find anything artificial, nor potentially harmful additives, dyes, or ingredients you can’t pronounce,” she explained.

As rebranded companies tend to say: it may be a new look, but it’s the same great taste. And those fundamental values which inspired her to launch the company in the first place are still at the forefront of her work and products every day.

The products are currently sold at a number of locations across Massachusetts and New Hampshire. Local spots include the Worcester Public Market at 160 Green St., Maker to Main at 328 Main St., and Julio’s Liquors in Westborough. Alicia also sells the products on her website: aliciasspiceco.com, and is currently onboarding with three major grocers and two distribution companies. Since 2015, she’s been selling wholesale and at farmers markets, fairs, and festivals.

“It’s very emotional to know that this has been my dream since I was a kid,” she said. “It’s surreal. This started as a little girl with a spoon and a dream, and now here I am.”

But that doesn’t mean that it was an easy path to her success. In manufacturing, Ms. Haddad said, it’s hard to be a female entrepreneur: often hearing “no,” regularly being the only woman in the room, and feeling she always had to prove herself in order to be in those meetings dominated by men running manufacturing facilities.

“It was extremely hard to get to where I am today. I was told “no” so many times in my life. I just keep pushing forward,” she said. “Sitting in a room full of men and being asked, ‘Who do you work for?’ and, “Who owns your business?’ … It’s like, ‘I do.’” 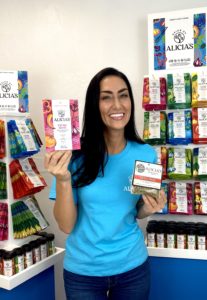 According to Ms. Haddad, a lot of her success is thanks to a relentless determination, coupled with a strong support system cheering her on. From customer feedback to the encouragement of organizations like Samuel Adams’ Brewing the American Dream team and the Center for Women and Enterprise (CWE) staff, third-party supporters have all pushed her and reassured her she has a seat at the table.

The more she grew, the more determined she was to prove that women have a place in the manufacturing world. The “no’s,” Alicia says, only made her try harder.

“Never give up on your dreams. If you’re providing a product or service to someone that no one else is doing, or you’re finding a way to do it better or streamline the process, then don’t give up,” she said. “If people tell you ‘no,’ that doesn’t mean you should walk away. Use that doubt as fuel.”

Ms. Haddad believes that this type of entrepreneurial spirit can be sparked in many people, and that, at any point, someone with a dream can start a company—no matter what level of business experience they may or may not have. “If I can do it, anyone can do it. I’ve built this company and continue to learn as I go,” she said. “I think that if I didn’t have a few deeply influential people in my corner saying ‘you can do this,’ then it all would have been a lot harder.”

On top of a forthcoming community-centric effort with local youth for a ‘Spice Art’ program, Ms. Haddad is actively involved in the Central Mass communities where she’s doing business. She’s served as a keynote speaker for the CWE’s Women Who Lift Up the World, and as a guest speaker for business classes at Clark University and MassBay Community College. She also spends time teaching and mentoring young entrepreneurs, as well as donating to several local organizations close to her heart.

Alicia was honored as the 2020 Entrepreneur of the Year by the Worcester Chamber. That same year, she was named the Entrepreneur of the Year by the Commonwealth of Massachusetts. Worcester Business Journal named her to its 40 Under Forty Class of 2021, and she was also chosen as a Brewing the American Dream Pitch Room Award Recipient for 2021 by Samuel Adams. Most recently, the CWE awarded her the Andrea C. Silbert Rising Star Award 2022.

“It means everything,” Ms. Haddad said. “Just being able to look back at all that I have accomplished. Becoming a state-, nationally- and federally-accredited woman-owned business, seeing the recognitions and awards I’ve received, and forging [this path] on my own—it means everything.”

Monica Sager is a correspondent for the Worcester Chamber.