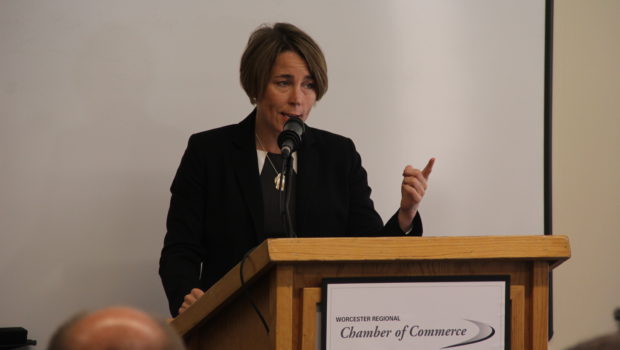 WORCESTER — Serving as guest speaker at the Worcester Chamber’s latest Business and Government Forum at Clark University, Attorney General Maura Healey highlighted the impact her initiatives and resources have on the local economy and business community.

“Despite what is happening at the national level, I want you to know that I’m very focused on the impact of those decisions and policies on Massachusetts, on our residents, and on our businesses,” said Healey.

As many federal agency leadership positions remain empty, the Attorney General’s office has been hard at work tackling national issues within the communities of the Commonwealth. “There doesn’t appear to be a whole lot of governing going on…and I think that presents a real problem in terms of business certainty and predictability and also just getting stuff done. We may not agree on policy, but we have got to have an actual functioning government, and right now, I don’t see one,” said Healey.

The lack of momentum in Washington has given the Attorney General’s office an opportunity to “double down” on local and state efforts. One policy of the new administration that had a direct impact on Massachusetts communities was the proposed travel ban. With Massachusetts being home to some of the top colleges and medical facilities in the country, the status of many students, professors, and medical personnel were in question. Healey joined other attorney generals from across the country to successfully block the ban.

“When Massachusetts interests are affected like that, we need to stand up,” said Healey.  Although the case was won, Healey and her team continue to push back against reformed travel ban proposals.

In addition to the travel ban, Healey criticized the new administration’s attempt to repeal the Affordable Care Act. “Obamacare needs fixing, there’s no doubt about it. I know what families are experiencing…but we can’t throw the whole thing out,” said Healey. The President’s proposed budget also cuts funding for the National Institutes of Health (NIH). “I turns out that bill would jeopardize coverage for about 300,000 Massachusetts residents. Think about the ripple effect.”

Although Healey spends much of her time defending Massachusetts interests at the national level, one main issue she has focused on at home is the opioid epidemic. Along with successfully reducing the price of the lifesaving drug, Narcan, she has worked to fund and implement an opioid education program into Massachusetts middle schools.

As Attorney General, Healey has tackled a wide variety of issues. From standing against the proposed travel ban, to creating drug education programs, her mission is focused on defending the interests of Massachusetts. “I’m excited about the opportunity to grow our presence and partnership here in Central Mass. I welcome your ideas and I look forward to working together,” said Healey.