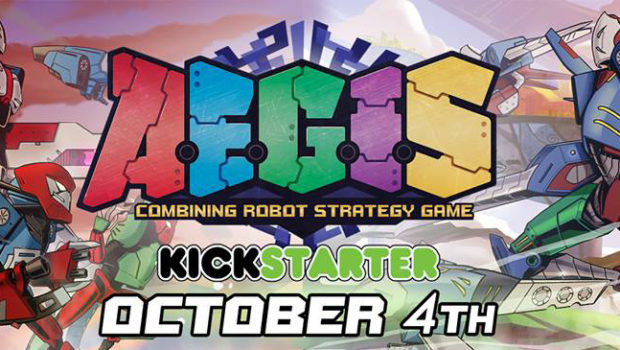 A.E.G.I.S. offers Combining Robot Strategy Game. This is a tactics game where players use teams of five combining robots to face off against each other. Players’ squads of robots share energy and fight as one united front and engage in simple dice-based combat. Smaller robots can be combined into bigger, more powerful ones to change the tide of battle. More than 80 different robots in five different classes (Assault, Evasive, Guard, Intel, Support) help players find the right strategy and combinations. The game is more accessible than an average tactics game. Also, with the same huge depth of strategy. Additionally, newcomers to the strategy game scene and wargaming veterans alike will enjoy the game.

The game is launching with two different boxes, the red Arc Buster box and the blue Sky Guard box. Each is a stand-alone game for 2-4 players which will retail for $39.95.

A.E.G.I.S. is being launched on Kickstarter and published through Marlborough-based Greenbrier Games, which has a history of extremely successful crowdfunding campaigns. Developers seek $40,000 to fund the printing of several thousand copies of the game.