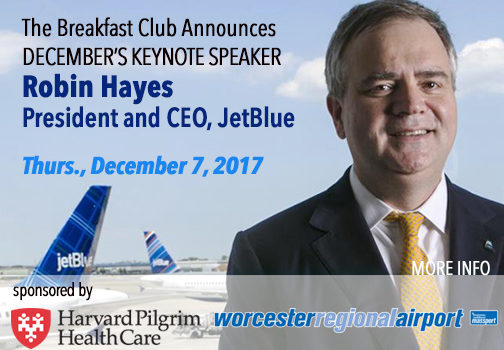 WORCESTER, MA – The Worcester Regional Chamber of Commerce today announces that Mr. Robin Hayes, president and chief executive officer of JetBlue will be the keynote speaker at the December 7, 2017 Breakfast Club event to be held at St. Spyridon Hall in Worcester. The event will take place from 7 am to 9 am and is sponsored by Worcester Regional Airport (WRA) and Harvard Pilgrim Health Care.

Robin Hayes became JetBlue’s CEO and a member of the company’s board of directors in February 2015. Prior to this position, Mr. Hayes was JetBlue’s president, responsible for the airline’s commercial and operations areas including airport operations, customer support (including reservations), flight operations, inflight, system operations, technical operations, as well as communications, marketing, network planning, and sales. He served as JetBlue’s executive vice president and chief commercial officer from 2008 until 2013.

Prior to joining JetBlue, he was British Airways’ executive vice president for The Americas. Over the span of a 19-year career with British Airways, he also served as area general manager for Europe, Latin America and the Caribbean. Mr. Hayes is a graduate in electrical and electronic engineering from the University of Bath in the United Kingdom. He received a BSc and Masters in engineering from the university.

The addition of daily service from Worcester to New York’s JFK airport on an Embraer 190 aircraft was announced last February with an expected start following installation of the new Category III instrument landing system sometime after the first of the year, 2018. The $30 million investment in the Category III system, which will be operated by the FAA, provides planes with the ability to land in low visibility weather conditions.

“The JetBlue service from Worcester has been a tremendous asset to the region and has had a positive economic impact,” stated Timothy P. Murray, president and CEO of the Chamber. “We look forward to welcoming Mr. Hayes to Worcester and look forward to hearing from him directly why the airline has invested in the city.”

The economic impact of Worcester Regional Airport was estimated to be $46 million in 2014 by MassDOT’s airport economic impact study. The importance of the airport will only grow as activity increases.

Reliable and accessible transportation is critical to the business community and the Worcester Regional Chamber of Commerce has been an ardent supporter of the airport and expanding commercial service to the region. The new landing system is the latest in a series of upgrades at the airport that include renovations to the Airport Rescue Fire Fighting station in 2015.

“The addition of flights to JFK International Airport in New York City is good for the business community – for both people doing business in New York and for those looking to connect to other cities.” Murray goes on to say, “Investments in the airport are investments for the entire community – for both leisure and business travel. The new flights are another piece of the puzzle connecting Worcester to other cities and making Worcester easier to do business with.”

Known for their excellent customer service, a critical component to business success, attendees will hear from Mr. Hayes about how JetBlue leadership plays a critical role in maintaining a strong service oriented organization across multiple cities and employee roles.

The cost to attend the Breakfast Club event is $40 for Chamber members, $60 for non-members and $375 for a table to ten.