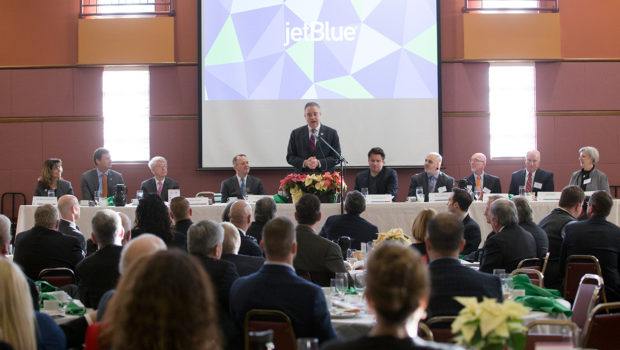 JetBlue Flights to NYC Slated for May 2018

Speaking before a sell-out crowd at Saint Spyridon Cathedral, Hayes announced that daily JetBlue flights from Worcester to JFK Airport in New York City will officially begin on May 3, 2018 and that very low cost tickets are now on sale.

Crediting low fares and strong customer service as the core ingredients for continued growth, the NYC flights will feature the Embraer 190 Aircraft that can accommodate up to 100 passengers in two-by-two layout rows with full in-air amenities. Once in New York at 7 a.m., passengers can then access more than 70 airlines that operate out of JFK or return back to Worcester same day just before midnight. New York City is JetBlue’s largest focus city, with the carrier offering up to 175 daily national and international departures.

“Flight 671 is aimed to be a gateway to the world,” Hayes said. “And that’s going to open up flights to Florida, Antigua, Saint Lucia and a lot of the JetBlue network.”

The expansion here and elsewhere by JetBlue would not be possible, Hayes added, without a vibrant and well-trained staff. About 2,000-3,000 staff hires are made annually from nearly 250,000 applicants. “Take care of your people and they will take care of your customers,” he said, evidenced by the airline being listed by Forbes in May 2017 as the 12th best place to work out of 500 companies nationally, and as the number 1 transportation employer for the third year straight.

With recent investments in newer seats, larger television screens, and snack marketplaces, JetBlue is better positioning itself to compete in the premium market out of Boston and JFK against other major airline companies such as Delta, American, Southwest and United airlines.

“This all talks to the spirit of innovation at JetBlue,” Hayes said. “What we do is target sectors that are poorly served with poor products and high fares and we come in and try to disrupt that.”