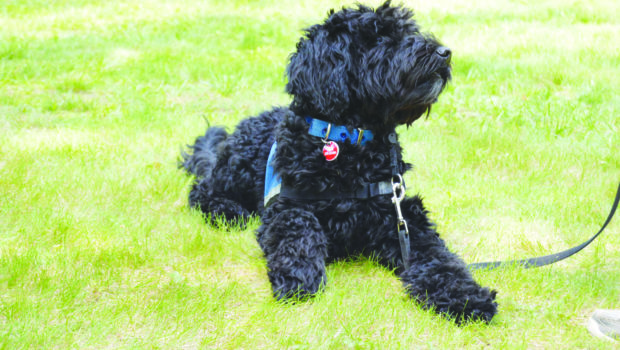 Suited for larger dogs and an upgrade to the decades-old technology of the previous facility, on June 1 NEADS opened its new Canine Center.

Known across the nation, the 44-year-old Princeton-based organization trains Labrador retrievers as service dogs and claims to be one of the first such companies in the United States.

Designed for dogs to be let loose within a central hub, the Canine Center consists of 31 larger kennels and represents an evolution in dog training technology.

NEADS’ previous kennel was “too confining for the labs and created a fair amount of stress” said CEO Gerry DeRoche. The prior kennels were designed for beagle-sized dogs with shorter doors and smaller individual space. Today, he added, most NEADS dogs are much larger.

“We needed to be more efficient, [we needed] a facility that would be warm, welcoming, and less stressful for our dogs,” said Mr. DeRoche.

NEADS spent 18 months studying similar organizations’ canine training facilities across the country, but could not find one that was suitable for their model.

Instead, an architect from New Mexico whose expertise lies in structures designed specifically for human and animal use was hired by NEADS to design the new facility.

The eight-month renovation cost $1.5 million and was paid for through capital campaign fundraising.

“Having one major donor gave us the confidence” said Mr. DeRoche that this was a necessary upgrade and that the public would want to be involved in its creation.

NEADS plans to continue expanding its Central Massachusetts footprint with a 6,000-sq.-ft. off campus breeding center which will similarly be paid for through the fundraising of a second capital campaign. NEADS previously did not have a breeding program and struggled with access to qualified puppies. The development of a breeding program, said Mr. Deroche, will fix this problem.

At any given time, NEADS has 70 to 80 dogs in training and provides nearly 50 clients with service animals per year. However, these numbers can increase with the presence of a breeding center and increased access to more-qualified dogs.

“If we’re going to be successful, we need to have the facilities to support” our mission, he added. “NEADS world-class service dogs change lives. With everything that we do, it’s geared to make sure we have a world-class experience for our clients.”

Rebecca Landry is the Marketing Intern with the Worcester Regional Chamber of Commerce. She can be reached via email.