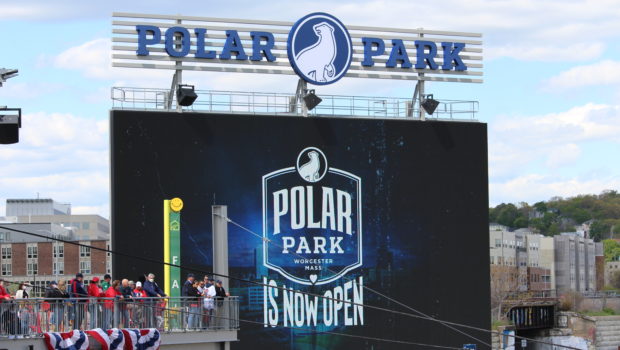 Polar Park is still in the nascent stages of being a part of the fabric of the Canal District community, but for local bar owners, its presence is overwhelmingly positive for their businesses.

While parking has been the major debate within the community since the inaugural season began, patience is proving to be key. More private lots are offering affordable flat rates of up to $20 per car depending on proximity to the ballpark, and the City of Worcester recently dumped its Canal District parking meters in favor of single kiosks. The city has also added remote parking payment service with the app Passport, making parking a quicker and easier process.

These measures are currently not enough to comfortably accommodate the type of record-breaking crowds that Polar Park is getting, such as when Chris Sale did a rehab start at Polar Park in late July. The city is building a 340-space municipal parking garage across from Polar Park which should take a significant burden off the parking areas used by Canal District businesses.

Bar owners Patrick Patton of Patsie Dugan’s and George Yantsides of Rock Bar – both members of the Canal District Alliance – agree that despite initial parking issues, Polar Park is a boon for not only their businesses, but the city at large.

“It’s had a positive effect not just on my business, but on the Canal District and the city,” said Mr. Patton, a lifelong Worcester resident who has owned Patsie Dugan’s on Millbury Street for 10 years.

“The thing I tell most people is, it’s not done yet,” Mr. Patton continued, citing several incoming housing and retail developments that will complement the ballpark, including Madison Properties’ campus of apartment buildings, hotels, and an office and lab building. “This is private money, people spending their money to invest in the city. This increases our tax rolls, brings retail, brings apartments – it’s win, win, win for Worcester.”

Mr. Patton also noted Polar Park’s capacity to hold events outside of the baseball season, such as college football games, comedy nights, and proms. “It’s more than a ballpark – a lot more – and that’s something I think a lot of people don’t see.”

George Yantsides, owner of Rock Bar on Water Street, also noted what he sees as the ballyard’s overwhelmingly positive effect on his business. Mr. Yantsides, also a lifelong Worcester resident, started his business in February of 2019. “The pandemic took its toll on us…it was decimating,” he said, adding that Polar Park has offered his business a path to recovery.

Parking was something both owners were candid about discussing. Rock Bar is adjacent to a small, municipal parking lot which costs $15 during Polar Park games and events. “It’s deterred a few of our customers – I’ve gotten messages from some people on [Facebook] Messenger who say they won’t pay $15 just to come here,” Mr. Yantsides said, further explaining that parking is not a huge detriment, but is still an issue that will be solved over time.

Mr. Patton also has a municipal lot next to his bar, one which costs $10 on game days. He says his parking usually does not fill up all the way even during games and noted that street parking was just a couple of dollars at most if you can get a spot. For those concerned about parking, Mr. Patton advised they should be patient to see what the municipal garage and more private lots will do for capacity.

Mr. Patton said he “tips his hat” to city leaders who not only brought the Red Sox to Worcester, but who are addressing parking issues by building the new garage, setting up new residential parking signs, and creating stricter parking enforcement.

Both Mr. Patton and Mr. Yantsides said the best thing about Polar Park has been the number of new customers they’re seeing that they’d never seen before. “We see so many new faces coming in; we’re the only live music venue in this neighborhood and we get the foot traffic of people following the music. It’s really nice to see people coming in,” said Mr. Yantsides.

Growing pains are part of any major development in an emerging city. As the Worcester Red Sox’ new home quickly continues to build on the mantra of “more than a ballpark,” with several surrounding developments bringing vitality and walkability to the Canal District, Worcester businesses will continue to reap the benefits of the incredible achievement that is Polar Park.