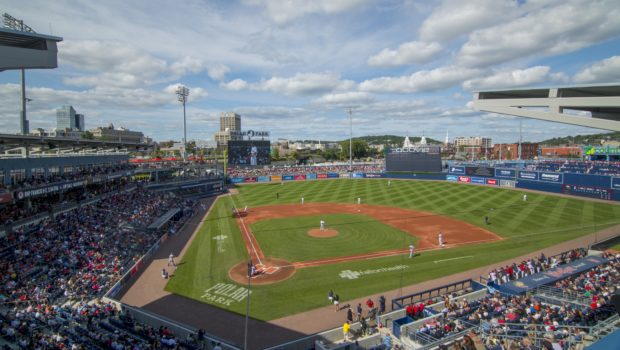 In lieu of a message from our president & CEO, in this edition of Chamber Exchange, our editorial staff sat down with Tim Murray following the conclusion of the Worcester Red Sox’ inaugural season to get his reflections on the team’s first year in Worcester, given the Worcester Regional Chamber of Commerce’s role in recruiting the team to the Heart of the Commonwealth. Below are edited excerpts from the interview.

Now that the Worcester Red Sox have completed their first season at Polar Park, how would you evaluate the past year?

Overall, it was a tremendous success, especially given the challenges presented by Covid-19 which impacted the construction schedule, delayed the start of the season, and limited the number of people that could attend the games in the beginning of the season into the month of June. These challenges notwithstanding, the Worcester Red Sox had one of the largest attendance rates in all of Minor League Baseball, bringing hundreds of thousands of people to the city from across New England during the spring and summer months. The feedback that I received from many people directly about their experience at Polar Park and in the city as well was overwhelmingly positive.

What (if any) negatives did you hear of?

Clearly, there were some hiccups early with parking and the delay in implementing the tiered payment parking plan, as well as people getting accustomed to walking to the park from different vantage points. The other thing is making sure the city is clean and free from litter and debris. Hopefully, programs like the Worcester Green Corps — which will seek to facilitate better partnerships with neighborhood businesses and resident groups — can improve this situation in the Canal District and Green Island neighborhoods, as well as across the city. The Worcester Green Corps is off to a great start in terms of collecting trash, initiating beautification programs, and building partnerships.

Why do you think Worcester was successful in bringing the team to Worcester from Rhode Island?

Well, I think there were a number of factors. First, there was political dysfunction in Rhode Island in that the state leadership could not come up with a package to keep the team in Rhode Island. Secondly, in Worcester, there was a level of collaboration starting with the Canal District Alliance, business community, institutional leaders, and obviously city and state government officials. Lastly, we had 22 acres of property (owned by Wyman-Gordon) that were vacant for 40 years and had been included in the Worcester Redevelopment Authority’s (WRA) Downtown Urban Revitalization Plan that was completed in April of 2016. The inclusion of Wyman-Gordon’s 22 acres signaled to the company that the city was serious about taking the property by eminent domain authority. The Chamber also shared the WRA’s plan with Denis Dowdle from Madison Properties, who bought the land from Wyman-Gordon. Essentially, we had a site, though it was not pad ready in a traditional sense infrastructure-wise.

What role did the Chamber play in this process?

First, we lobbied hard for and participated throughout the process of the WRA’s Downtown Urban Revitalization Plan. Secondly, our board of directors was supportive of the effort to bring the Red Sox to Worcester and OK’d us spending money to research the issues involved in support of the effort. Clearly, the Canal District Alliance’s post card campaign and the City Council resolution asking the City Manager to reach out to the Red Sox were important factors. As a result, the City Manager asked me to set up a meeting with Larry Lucchino given my work with him as Lieutenant Governor when he served as President of the Boston Red Sox. We met in December of 2016 in Boston to discuss Worcester’s interest, and he acknowledged he was impressed that Worcester was being so proactive in reaching out, but that he had given Rhode Island and Pawtucket a deadline of July 1, 2017 to reach an agreement.

When Rhode Island did not meet that deadline, what happened next?

Immediately, working with the City Manager and Mayor’s office, the Chamber invited Larry Lucchino and his team to Worcester for a detailed briefing and tour that lasted several hours at Ed Russo’s restaurant in the Canal District. Larry Lucchino brought his entire team including Janet Marie Smith, Dan Rea, Mike Tamburro, and others. It was clear they were impressed by Worcester and the momentum underway in the city. Shortly thereafter, the City Manager and I went to the State House to meet with the Secretary of Housing and Economic Development to discuss the opportunity. Lieutenant Governor Karyn Polito arranged this important first meeting with the state. Lt. Gov. Polito was a strong advocate throughout this process, working closely with the City and business community.

What other important moments or milestones happened during this process?

City Manager Augustus and his team (including outside counsel Jeff Mullan) worked extremely hard throughout the process with challenging negotiations and construction hurdles amid a pandemic. However, there were three other moments that I thought were important to demonstrate to Larry Lucchino, his staff, and team owners, that the business community in Central Mass would be supportive of the team if they came to Worcester. First, when word got out that the city of Worcester was being considered by the Red Sox, Worcester Railers Hockey Club owner Cliff Rucker invited Larry Lucchino to a Railers game. It was a day game with 5,000 – 6,000 Worcester Public School students in attendance. The place had great energy and Larry and his team witnessed firsthand the broad array of corporate sponsors of the Railers via their advertising at the DCU Center. Second, as negotiations with the City were progressing, a number of city business leaders gathered with Larry Lucchino and Red Sox brass and told him we had secured more than double the number of corporate sponsors they had asked for and that it was time to make an announcement. Third, the Crowley family and Polar Beverages’ commitment for the naming rights of Polar Park really helped put things over the top.

How do you think Covid will impact the timeline of the ballpark development district?

Like the construction of the ballpark, it has delayed things. However, I am an optimist. First, The Cove’s market-rate housing and retail development, as well as Boston Capital’s affordable housing plan – which were not originally in the plan – have been added and are moving forward. The site work for Madison Properties’ 300 units of housing has begun and the parking garage is nearly complete. There is a heightened interest from life sciences companies in Worcester given our biotech and health care cluster. In just a few years, this mixed-use district will be complete, thereby adding density that will assist area businesses; encourage pedestrian activity that is less reliant on cars; and knit the Canal District and Green Island neighborhoods back together with downtown, Main South, lower Chandler Street, and the Vernon Hill neighborhoods. The benefit to that is invaluable to the long-term vibrancy of the city.

Timothy P. Murray is the President & CEO of the Worcester Chamber. 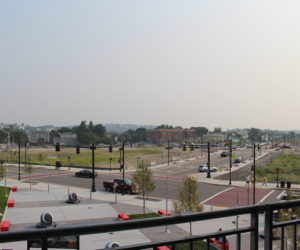