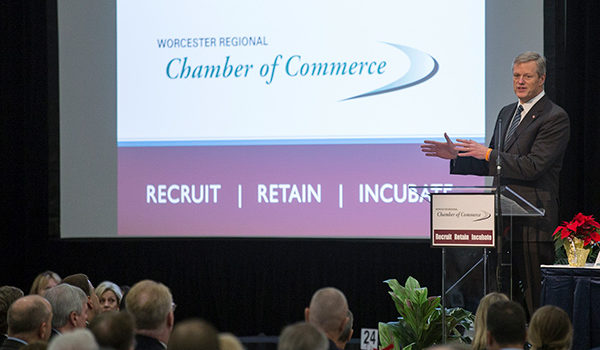 WORCESTER – Citing his own Cabinet leadership team filled by Democrats, Independents and Republicans alike, Gov. Charles Baker told Worcester Regional Chamber of Commerce’s 142nd Annual Meeting attendees on Dec. 1 at the DCU Center that he is constantly impressed by the city’s team-first approach to development.

“You can learn a lot from people you don’t always agree with, and in some respects you can probably learn more if you’re willing to hear what other people have to say, process it and think about it. It takes two or more to collaborate,” Baker said, addressing the sold out crowd of more than 790 business professionals, making it the highest attended Annual Meeting in the Chamber’s history. “You can’t get there by yourself. In a distributed decision-making model, more than one point of view matters.”

In many respects, Baker’s vision mirrors what has transpired in Worcester over the past 10 years in terms of major progress and development.

At this same event last year, Worcester City Manager Edward Augustus challenged attendees to start acting like the second largest city in New England. Augustus, who believes city leaders have answered that challenge, thanked Baker and his team for the state’s $10 million contribution to the Route 20 sewer project that will open what’s known as the city’s last frontier for commercial development. That area could potentially generate $17 million in new tax dollars in the first 10 years alone.

Moreover, the state’s Open for Business initiative led by Lt. Gov. Karyn Polito has spurred a new agreement between the state and the Worcester Business Development Corporation and Craig Blais to redevelop 44 acres of former Worcester State Hospital land into a bio-manufacturing park.

Worcester Regional Chamber president and CEO Timothy Murray added to the teamwork conversation by citing the Chamber’s creation of a state-wide coalition to expand access to vocational education, leading to the formation of the Alliance For Vocational Technical Education. The alliance attracted the support of the Baker-Polito Administration with a state investment of $45 million over three years.

That support for Worcester is also evidenced, Murray continued, in the state’s commuter rail expansion between Worcester to Boston with the MBTA’s Heart to Hub non-stop daily line, as well as Massport’s $30 million expansion and improvements at Worcester Regional Airport.

Sharyn Williams December 5, 2017 In the News