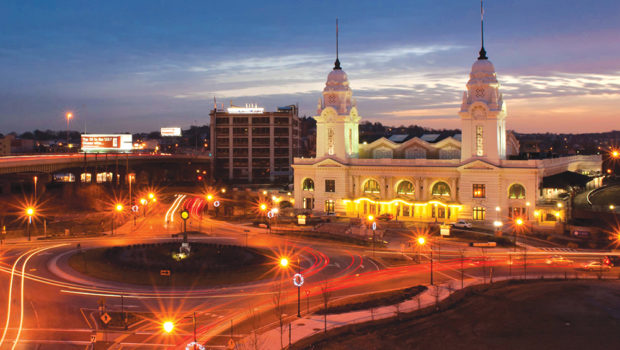 Union Station 2.0: What’s next for this Worcester landmark?

Over the years, millions of federal, state, and local dollars have been invested into Union Station for its restoration, renovation, and increased transportation use. Located at Washington Square in downtown Worcester, the station was built in 1911, abandoned from 1974 until 2000. The building was renovated and opened again in 2000 by the Worcester Redevelopment Authority (WRA). The WRA continues to own and operate the station with support from the City of Worcester.

The beauty and intermodal transportation function of the new building has served as a catalyst behind the development of much of the downtown area and surrounding neighborhoods. Efforts must now be made to fully maximize space within Union Station and transform the building and garage leases into an active place of commerce.

Union Station can be observed as a relatively empty facility except for commuter rail trips and scheduled events which create foot traffic through the station. It has been refurbished and the result is a beautiful train station and historic venue. However, the empty retail & commercial provides no meaningful economic impact for the city and its residents.

Union Station is positioned at a key location in the downtown area. It serves as an intermodal transportation hub and is accessible to not only the 182,511 Worcester residents, but the 35,000 students residing in Worcester as well. Additionally, it is an important transportation option for all Central Massachusetts residents. Popularity of Union Station as a choice for travel is on the rise with over 600,000 travelers using Union Station annually.1 Union Station also possesses a 500-car parking garage, attached to the building which is managed by the City of Worcester, Off Street Parking Board. Over 1,000 units of market rate housing have been completed, or are under construction in close proximity to the building. Union Station in Washington Square is an optimal location—yet it is still not leased to capacity and providing the desired economic impact. Over the last few years the downtown area has been rapidly improving due to the growing arts and cultural scene, new restaurants and retail venues. Union Station is a great location for commercial, retail and office space which can add to this renewed vibrancy in Worcester.

While Union Station certainly looks the part, it is time for it to realize its potential as a place that provides more than just transportation services. It currently has occupied office space taken by companies such as Vanasse Hangen Brustlin Inc (VHB), and until recently the Central Massachusetts Regional Planning Commission (CMRPC). With the right mix of development and tenants, Union Station can be transformed into both an intermodal transportation hub, and a hub of commerce.