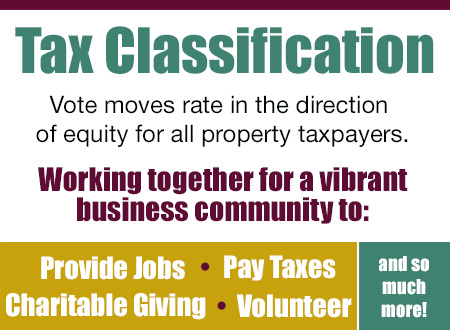 Momentum towards single tax rate continues. More work to be done in 2015.

After weeks of being lobbied by businesses and residents alike, the Worcester City Council voted last night to set the property tax rates for the current fiscal year.

In an 8-3 vote, the council adopted rates of $31.73 for businesses and $20.07 for residents, average increases of $300 and $107 respectively. This set the new factor at 1.3535, which does continue the momentum of the past four years to move closer to a single rate (which is fair and equitable for all taxpayers).

The Chamber advocated for rates of $31.20 for businesses and $20.29 for residents which would have equaled average tax bill increases of $154 and $145 respectively. More significantly, this set of rates would have reduced the factor (or shift of obligation from residents to businesses) from 1.3556 to 1.3310, moving us even closer to a single rate.

The Chamber extends its sincere thanks to all of those businesses who attended the hearing and contacted the councilors in the weeks leading up to the vote in support of an equitable rate. In particular, thank you to Prime Air Blowers, Evo, and Standard Auto Wrecking who told their stories to Worcester City Councilors helping them to understand the impact the dual tax rate has on small business owners.

We ask that you consider thanking the 8 councilors who voted to help continue the momentum and support the business community. They are:

A group will be formed in early 2015 to work on a plan to continue the momentum toward a single tax rate and to establish a plan that will achieve that goal in 5 to 10 years.