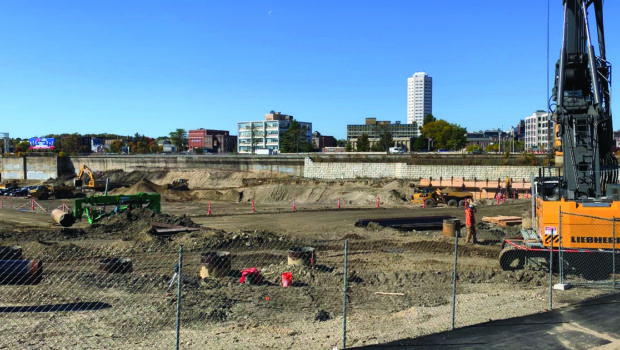 As spring approaches, and many New England sports fans watch, wonder, and debate the future of the New England Patriots’ star quarterback Tom Brady and the merits, or lack thereof, in the Red Sox recent trade of Mookie Betts, there’s lots of local scuttlebutt to discuss.

But first, on behalf of the Worcester Regional Chamber of Commerce staff and myself, our hearts go out to the family of Grace Rett, the Holy Cross women’s crew team, and the college’s greater community on their loss. May you grow stronger together through this terrible tragedy.

It won’t be long before the City of Worcester, and the forthcoming Worcester Red Sox, are part of numerous daily baseball conversations pertaining to everything from the future players for the parent club, the Boston Red Sox, to the amenities at the new stadium and who will throw the first pitch.

The Boston Red Sox new general manager, Chaim Bloom, has gained a reputation as having a keen eye for talent and the development of prospects through the baseball farm system during his tenure in Tampa Bay. Expect much of the same based on the charge given Mr. Bloom by the Boston Red Sox’s ownership when he was rehired in October 2019.

As a result, it will be interesting to see the lineup. There may be a lot of shuffling of players between Worcester’s Polar and Fenway parks beginning April 2021 when play commences here.

Watching top-notch baseball right around the corner from the office, or a short train ride away, is another good reason for local business and political leaders to continue to push for expanded commuter rail service between the capital and the Heart of the Commonwealth.

Another, more timely, Worcester Red Sox note comes as the result of a modified proposal presented by City of Worcester city manager, Edward M. Augustus Jr., to the city council. The memo regarded both the construction of Polar Park, the portion of the project funded by public dollars, as well as the private sector development adjacent to the ballpark site.

While the total cost of the ballpark’s construction has risen by nearly $10 million ($9.4 million), as outlined in Mr. Augustus’ modified proposal, the timeline of the private sector development taken on by Madison Downtown Holdings has been cut in half. What was initially planned as two phases has now been combined.

That’s not all though. Madison Downtown Holdings will be adding the construction of a second, 60,000-sq.-ft. office building and is nearly doubling the number of market-rate housing units to a minimum 350 apartments total throughout the project.

These new homes will create a density of residents within the neighborhood – not to mention ensure a population of future customers for Canal District and Green Island businesses.

The expansion of the project, as well as nominal increases to the parking and ticket fees, will ensure it continues to pay for itself. That being said, a ticket to a Woo Sox game will start at $11 – an affordable outing for everyone from a young family to an elderly resident on a fixed income.

Beyond the tenants of the ballpark agreement, and those of the adjacent development district, interest in the city as a whole has steadily increased since the team’s relocation announcement in August 2018 and the Chamber has been there throughout to guide and inform interested parties.

Through its recruitment efforts, the Chamber has worked hand-in-hand with Synergy Investments, the firm behind the recent acquisition of the Worcester Plaza Building known colloquially as the “Glass Tower” ($16.5 million) as well as Benedict Canyon Equities’ $28.8 million purchase of the Skymark Tower on Main and Austin streets.

Both developers talked about the Polar Park project as a significant factor in their decision to invest in the City of Worcester and have plans to significantly reinvest in each structure. And the interest doesn’t end there.

Currently, multiple additional investors are working with city and Chamber officials discussing projects that are soon to be announced.

The hockey all-star break for the NHL, AHL, and ECHL has passed and it is make or break time for teams looking to secure a spot in the playoffs.

One local team looking to do just that is the Worcester Railers.

While the Railers’ intensity and pace of play has picked up following their recent coaching change, playoff points have been elusive for the Worcester-based organization. Let’s hope the team can put some consecutive wins together soon.

On March 7, together with the team, the Chamber is hosting its annual member appreciation night. For free tickets to the Railers’ game please see our Sports Street Trivia question at the end of the column. If you can guess one, or both, of the correct answers to those trivia questions we will reserve two tickets in your name at the DCU will call box that evening.

ARENA FOOTBALL, BACK IN SEASON

The Massachusetts Pirates, who begin arena football play at the DCU Center with the start of their season in April, recently announced their new head coach Patrick Pass.

This name should be familiar to many New England Patriots fans as Mr. Pass played for the NFL team for six seasons from 2000 to 2006. A versatile member of the Patriots, after being drafted by Head Coach Bill Belichick in the seventh round of the 2000 NFL draft, Mr. Pass served as running back, fullback, receiver, and as a member of the special teams unit.

Provide correct answers to either of the questions by email to vparent@ worcesterchamber.org and win two free tickets to the March 7 Chamber Member Appreciation Night.

1. What was the nickname for the Worcester Vocational School’s athletic teams prior to “Bulldogs” and the current Worcester Tech nickname of “Eagles?”

2. What was the nickname of the Bancroft School athletic teams prior to their current “Bulldog” moniker?

Timothy P. Murray is the President and CEO of the Worcester Regional Chamber of Commerce.