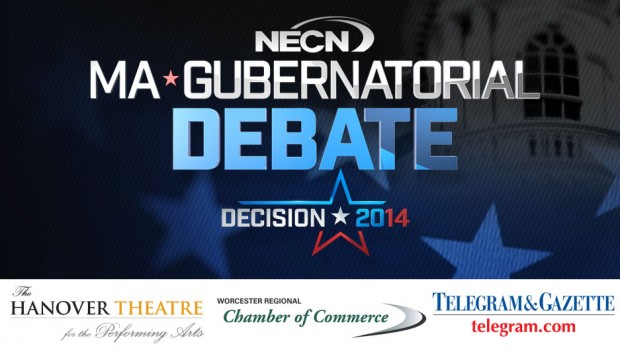 Worcester to Hold Gubernatorial Debate at the Hanover Theatre

The debate is scheduled for Monday, October 27, from 8 P.M. to 9 P.M. and will take place at the Hanover Theatre for the Performing Arts located at 2 Southbridge Street. Republican nominee Charlie Baker and Attorney General and Democratic nominee Martha Coakley will take part in the live, televised debate that will air on NECN. The debate will also be translated into Spanish and re-broadcast on Telemundo Boston/WNEU at a later date.

A two member panel, consisting of Chris Sinacola from the Telegram & Gazette and Alison King from NECN will ask questions of the candidates with the debate moderated by NECN’s Latoyia Edwards.

“The Chamber is excited about this unique opportunity to bring a gubernatorial debate to the Worcester region,” said Timothy P. Murray, President and CEO of the Worcester Regional Chamber of Commerce. “As the second largest city in Massachusetts, it is important for voters in the region to hear about the policies and initiatives that will impact their lives.”

“On behalf of our readers and digital audience, the Telegram & Gazette is honored to be a media partner of the gubernatorial debate in Central Massachusetts,” said James Normandin, publisher of the Telegram & Gazette. “The evening will bring an opportunity for the candidates to speak to the issues that are most important to residents in Worcester and the region.”

“We’re proud for the opportunity to host the debate,” said Troy Siebels, Executive Director of The Hanover Theatre for the Performing Arts. “The theatre should be a public resource for events like this, and we’re optimistic that we’ll see a lot of people come participate.”

The event is free to the general public; however you are required to register in advance via the Hanover Theatre website at: www.thehanovertheatre.org.