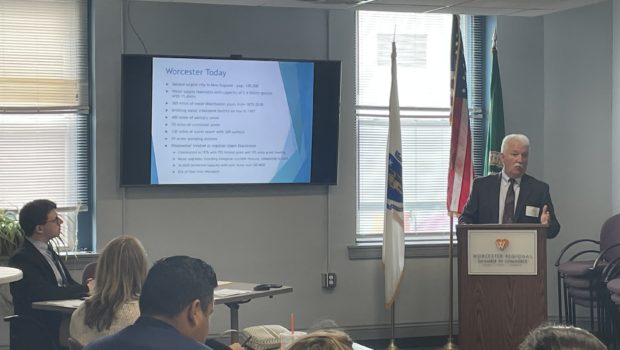 The Director of Water and Sewer Operations for the City of Worcester, Phil Guerin, spoke to members of the Worcester Regional Chamber of Commerce on June 22 about the Department of Public Works & Parks’ (DPW&P) Integrated Water Management Plan.

The presentation was part of the Chamber’s quarterly Construction and Real Estate Roundtable series, sponsored by Bowditch & Dewey. The event was held in person at the Chamber offices, making it the first roundtable to be held in person in more than a year due to the COVID-19 pandemic.

Mr. Guerin described Worcester’s history as it relates to water infrastructure, a history that is highly relevant given the fact that much of the city’s water and sewer systems are extremely outdated.

According to Mr. Guerin, there are 10 reservoirs that supply the city with drinking water, all of which were built prior to 1955. He added that many of the pipes underneath the city were built as far back as 1860, with 30% of the sewer system being over 100 years old. “A water main built in the 1950s is new for us,” Mr. Guerin said.

Faced with the need for a citywide overhaul, Mr. Guerin and his colleagues at the DPW&P set out to create what Mr. Guerin describes as a “highly ambitious master plan” called the Integrated Water Management Plan. It is billed as a sustainable strategy to provide clean waters for Worcester residents and businesses in an affordable and environmentally responsible manner.

The plan makes Worcester a national trailblazer in pioneering such massive municipal water and sewer infrastructure upgrades without the use of significant state or federal funding. “The bottom line is integrated planning determines what level of spending is sustainable – you can address the most pressing issues first and you can solve infrastructure and environmental needs simultaneously,” Mr. Guerin explained. “Our comprehensive plan is going to look at all of these, which is something we’re not aware that any other city in the country has done so far.” 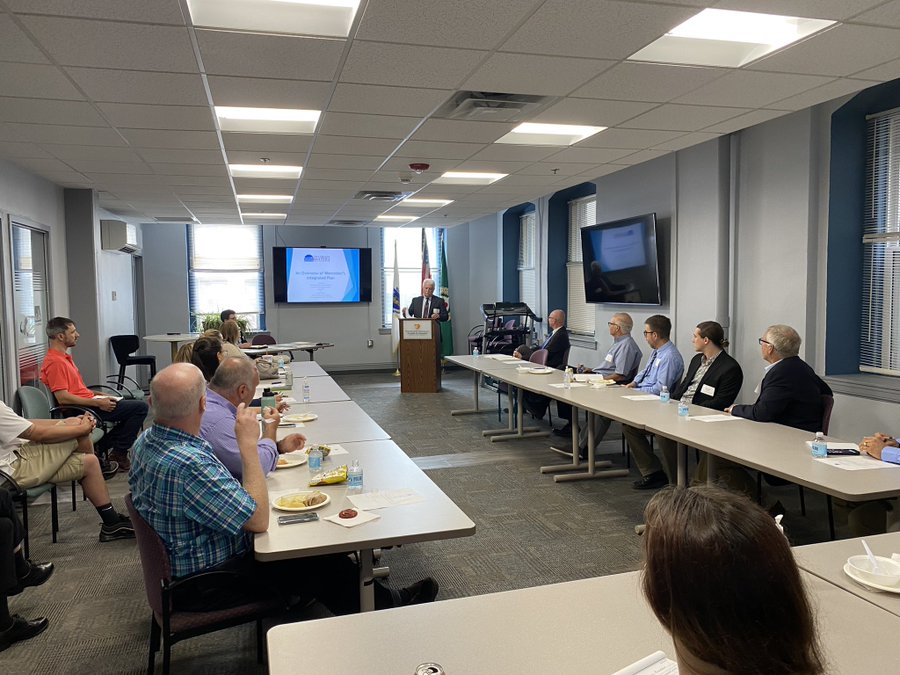 City of Worcester’s Director of Water and Sewer Operations, Phil Guerin, addresses an audience of Chamber members at a quarterly Construction and Real Estate Roundtable.

Mr. Guerin said it was something that his office works on multiple days a week. “We put our heart and soul into it,” he said, while also nodding to the involvement of the late DPW&P Commissioner Paul Moosey, who helped spearhead the plan’s initial development.

Over the first 20 years of the 50-year plan starting in 2022, the city is set to invest $32 million a year in water supply, treatment, and distribution, as well as in sewer and drain infrastructure upgrades. This is followed by $46 million annually from years 11 to 20.

The seemingly massive price tag represents a slate of proactive and comprehensive investments in the prevention of catastrophes such as flooding or pollution which could have large costs in the future.

Specifically, Mr. Guerin said that the Integrated Plan would address wastewater collection, update and make safer the combined sewer system under downtown and Main South to prevent overflows, invest in stormwater systems, upgrade the quality of water at the Upper Blackstone Regional Wastewater Treatment Facility in Millbury, and address flooding in Green Island.

Water and sewer rates are set to rise for residents and businesses again this summer, and Mr. Guerin touched on this in his presentation. His office has recorded a 22% decline in water usage since 2000, a trend which conserves water resources but at the same time reduces the revenues for the city. In a move to maintain staffing and operational needs, the DPW&P continues to propose increases to water and sewer rates. Sewer rates have risen 353% since 2000.

Mr. Guerin said this was an unfortunate conflict between demand and conservation, which hopefully the Integrated Plan can address to reduce costs for everyone in the city. As infrastructure and capacity improvements are made over the years, it can gradually reduce the water and sewer costs that reflect back on residents and businesses.

More information on the Integrated Water Management Plan can be found on the city’s website here.

The next Construction and Real Estate Roundtable will be held on September 7 at 12pm in the Chamber offices. CEO Dave Greaney of Synergy Investments, a Boston-based real estate firm which bought the Worcester Plaza glass tower in 2019, will be speaking on how his company and other Boston firms are starting to invest heavily in Worcester. Click here to register now.

David Sullivan is the Chamber’s Economic Development & Business Recruitment Associate. He can be reached by email here.