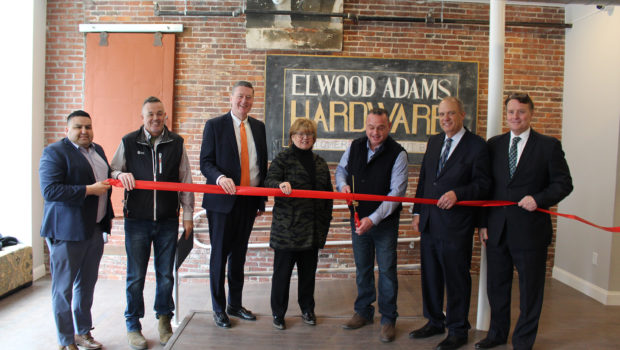 If not for a new plaque on the front of the building, many passersby in downtown Worcester would not notice the former Elwood Adams Hardware Store as anything special. The four-story brick building, however, was the first brick building built in Worcester. It was constructed in 1782—seven years before George Washington’s presidency.

The long time occupant of the building, Elwood Adams Hardware Store, was the longest continually operated hardware store in the United States. Elwood Adams closed its doors at 156 Main St. in 2017 after 235 years in business.

Now, the 15,000 square-foot hardware store is home to 13 units of market-rate housing, with mostly one-bedroom units that have modern amenities like in-unit laundry, marble countertops, and brand-new appliances.

In a February 24 ribbon cutting ceremony attended by the mayor, city manager, and other local dignitaries, Hingham-based developer Hugh McLaughlin of Ballybreen Ventures said that his first project in Worcester was something he and his team are proud of. “I’ve been to many places where it’s always been a fight […] but everything here was positive,” said Mr. McLaughlin while giving a nod to the city’s support for the project. “Elwood Adams will continue to be a vibrant building and an asset to the city.”

Worcester Regional Chamber of Commerce President and CEO Timothy P. Murray first reached out to Mr. McLaughlin about the Elwood Adams building after it closed permanently in 2017. Mr. McLaughlin, a longtime friend of Mr. Murray, had expressed interest in a Worcester development for some time and mentioned during the ribbon cutting that his friend Tim was a driving factor in bringing him to Worcester.

Scot Butcher of Tax Incentive Finance, a firm that worked with Mr. McLaughlin on the project’s financing, indicated that the state’s Housing Development Incentive Program (HDIP) and local historic tax credits were instrumental to the preservation project.

“This project wouldn’t have happened without the historic tax credit and [tax increment exemption],” said Mr. Butcher. “There are a lot of challenges that come with a building that was built before George Washington was president.” 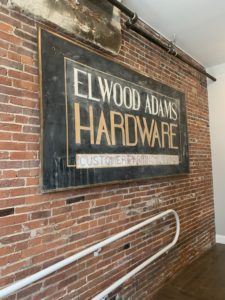 The project received a tax increment exemption (TIE) negotiated with the city council, which gave Ballybreen more than $59,000 in savings on new property taxes generated by the project over the next 10 years while creating more than $88,000 in new taxes for the city. With the TIE in place, Ballybreen is eligible to apply for a tax credit from HDIP which would be worth up to $850,000—a significant return for the $4 million renovation.

HDIP is only accessible by developers building market-rate rental units in Gateway Cities like Worcester. The Chamber has worked diligently with partners in the City of Worcester and in other Gateway Cities around the state to advocate for raising the HDIP program’s annual tax credit cap. The hope is that post-industrial cities like Worcester can introduce more quality market-rate housing to revitalize downtown areas by constructing on vacant lots or preserving historic buildings like Elwood Adams.

Elwood Adams is not the end of Ballybreen’s work in Worcester. The firm has already started the process of constructing 45 new units of housing and three retail and restaurant spaces at 1 Exchange Place, another historic downtown property which used to be police and fire headquarters.

“If this was the Worcester of 20 years ago and Elwood Adams closed […] this building would have sat empty and would have continued to deteriorate,” said the city manager. “It would have been a symbol of what used to be and what could have been.”

Instead, Elwood Adams joins the ranks of hundreds of new housing units being added to the downtown corridor as Worcester continues to attract developers from all over the country. As City Manager Augustus described it: “Worcester is open for business.”