Timothy P. Murray became president and CEO of the Worcester Regional Chamber of Commerce in June of 2013. He leads a team of professionals serving the region’s business community by focusing on economic development, public policy, member services, and other activities that contribute to a vibrant business climate. The Chamber’s mission of recruit, retain, and incubate aims to bring new businesses to the region, retain existing businesses, and nurture those in emerging sectors. 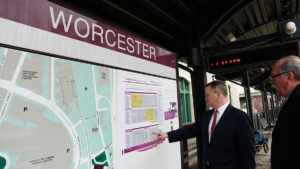 A life-long Worcester resident, he was a former three-term Mayor of Worcester, New England’s second largest city. Under Tim’s leadership, Worcester experienced unprecedented progress, with $1 billion of new economic development projects, such as Gateway Park and City Square, that are helping to transform an older industrial city into one that is well positioned to lead and grow in the new economy.

Tim attended public schools in Worcester and St. John’s High School in Shrewsbury. He studied at Fordham University in New York City and put himself through Western New England College School of Law, attending classes at night, while working days as a substitute teacher and housing advocate. Following law school, he became a partner in the Worcester firm of Tattan, Leonard and Murray.

Tim and his wife Tammy (Sullivan), also a Worcester native, continue to live there and are proudly raising their two daughters, Helen and Katerine.