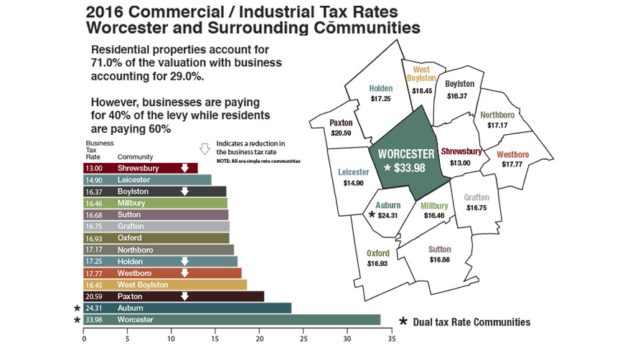 AUBURN – Look out Worcester, Auburn is on the move with a tax rate strategy that is saving both businesses and residents big money.

Auburn has the second-highest business tax rate in Worcester County after the city of Worcester in 2016, which also uses a split tax rate. Worcester’s FY ‘16 commercial/industrial tax rate was $33.98 per $1,000 valuation. All of this progress has resulted in Auburn increasing total new growth as applied to the levy limit, reaching $867,267 in FY ‘17. Better diversifying the town’s economy is also one factor in determining overall municipal bond ratings used for lending, which in Auburn currently sits at the second highest tier AA-plus ranked by Standard & Poor’s or an AA2 at Moody’s.

“Factoring in a taxpayer-burdened middle school renovation project in FY ’14 and agricultural land purchase in FY ’15, Auburn selectmen have for the most part voted to either hold the line or reduce the commercial/industrial tax deferential every year since I’ve been here,” says Jacobson, who started in her position mid-way through FY ’12. “They recognize that this isn’t something you should or could do overnight. It should be a long, steady strategy so as to not overly burden the residential taxpayer.”

Some of the most recent commercial growth Auburn is experiencing includes new franchise Bob’s corporate headquarters; 30,000-square-foot Percy’s Distribution Center; and a 90,000-square-foot Reliant Medical Center, retail spaces and restaurant now under construction in the former Macy’s home store at the Auburn Mall opening next spring. There are also a few open parcels on the market right now for large-scale industrial-zoned developments at the 17-acre former Lowe’s site by the Yankee Drummer, 457,000-square-foot Mid-State Packaging facility on Millbury Street, three other different parcels occupying almost 50-acres along Washington Street (Route 20), and a state-of-the-art R.H. White’s Construction headquarters and training center on Central Street with 300 employees based there. (See completed projects list below).

“We get a lot of expansions of existing facilities. When I first started here [in 2011],” Jacobson says, “there were a lot of vacant and unused lots along Route 12. Much of that space has filled up in the past six years.”

With the Auburn’s average medium residential home sales price at $227,500 – less than many neighboring communities – Jacobson says Auburn’s commercial/industrial businesses are still paying more than their fair share in taxes and receiving less in town services than the average residential owner. “It’s trying to find that sensitive balance to the needs of both residential and business communities,” Jacobson says. “The commercial/industrial tax rate is critical to keeping the residential tax rate low. If you start losing major CI, that has a negative impact on your residential base. Trying to explain to residents how this works can be very difficult for elected officials.”

The results of multi-tiered economic development efforts have begun to materialize in the growth of the Auburn commercial/industrial base as shown below: .

This international distribution company now occupies the entirety of a 456,920 square foot facility that has previously been vacant for several years.

Percy’s purchased the property in December of 2015 and began rehabilitation efforts to operate its new distribution facility within a 30,000 s.f. industrial building.

Wendy’s restaurant received Site Plan approval from the Auburn Planning Board in September of 2015 to add an outdoor patio with picnic tables to enhance its seating area.

They purchased vacant distressed property that was in poor condition, demolished the existing structure and are replacing it with a new building designed specifically to meet the needs of a 21st century childcare provider.

Auburn is home to the headquarters of R.H. White Construction. 300 employees are located in the company’s Auburn headquarters.

The new commercial nursery stand for the sale of produce at property located at 282 Southbridge Street is complete.  The project took place on an undeveloped parcel next door to Colonial Glass.  The business includes the sale of flowers and other various garden or nursery-related products.

TD Bank received Site Plan Approval to relocate their Auburn facility to a new property.  The construction approval includes leasing a pre-existing 3,500s.f. building with the addition of a drive-up ATM.  This relocation fills a vacancy within the front-facing 3-tenant retail space that includes ReadyMed at 460 Southbridge St and has prime visibility on a main thoroughfare.  The bank opened in September 2015.

This development consists of a new 800-foot road servicing 9 single-family houses on a 38-acre parcel. The lots contained in this subdivision have a minimum lot size of 60,000 square feet with a minimum frontage of 180 feet. The homes in this development will range from 2,300 to 3,500 square feet. As part of the design, the developer has placed a conservation restriction on approximately 20 acres for the purpose of preservation of habitat for flora and fauna of special concern.  Completed in April 2015.

An applicant received approval from the Planning Board in March 2015 to open a kitchen furniture and appliance store within a previously vacant retail building.  The existing building, formerly known as the King Phillip Motel, has high visibility on a state highway and was in deplorable condition.  The applicant began construction in spring 2015 to upgrade the exterior façade of the building and continues to improve the property throughout the construction process.  Construction was completed in the fall of 2016.

Spirit Central Inc. received a Special Permit from the ZBA in June 2015 to operate a dance/gymnastic studio within a 9,600 square foot vacant warehouse located in the Industrial Park zoning district.  They received Site Plan Approval from the Planning Board in July 2015 for the site layout which includes striping of 58 parking spaces to accommodate 120 students to be relocated to this facility from out-of-town.

Sharyn Williams November 3, 2017 In the News