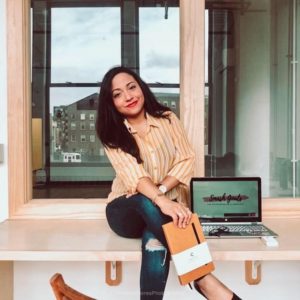 If there is one entrepreneur in Worcester who you can say has done it all, it’s Giselle Rivera-Flores.

Giselle began her entrepreneurial journey with The Learning Hub, a STEAM learning program that was focused on increasing the accessibility of STEM and arts to elementary school students. Giselle started The Learning Hub during her time as a 2016-17 class member of StartUp Worcester.

Giselle never wanted to be an entrepreneur growing up in Brooklyn, New York, telling her family that she wanted to be an attorney. Things changed when she and her husband moved to Worcester. After graduating from Quinsigamond Community College, she found a position as a leasing agent for an apartment complex in downtown Worcester. Giselle appreciated her eight years of experience there, but it dissuaded her from her previous dream of working in the legal profession.

She went on to become a full-time entrepreneur in 2016. Giselle initially found work as a digital media strategist for several major local organizations, a role that included social media curation, event management, and productivity coaching. She launched The Learning Hub, inspired by her daughter who was diagnosed with ADHD and had trouble learning in a conventional school setting. The Learning Hub offered out-of-school, hands-on educational sessions for K-6 students, partnering with the Worcester Public Library, the EcoTarium, and after school programs. The Learning Hub was selected to join the 2016 cohort of StartUp Worcester.

Giselle hit her entrepreneurial stride in 2016 and started Be Studios, a coworking photography studio for local artists. She also began to manage a personal consultancy brand.

The pandemic changed things for many business owners, Giselle included. Giselle began to focus more on Be Studios, a space that seeks to provide accessibility to the arts for people of color and spark dialogue about racial inequity and culture. Be Studios is located at 44 Portland Street, the same building where other coworking spaces such as WorcLab and Technocopia are located.

Of her time in StartUp Worcester, Giselle says, “I give a lot of credit to StartUp Worcester for giving me a platform to start my journey because for many entrepreneurs, starting is the hardest part, and this program helped ease the struggle and allowed me to expand beyond my original ideas.”