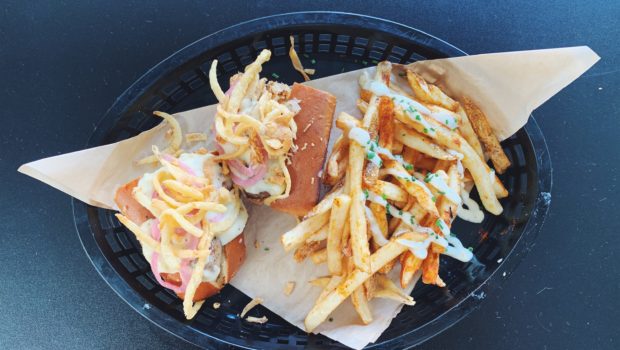 Beer Garden Gets Back to German Roots with New Menu

WORCESTER – Plant a black, red, and yellow flag and don some lederhosen. Downtown Worcester’s Franklin Street is now home to a small hamlet of German food and culture.

The reasonably-priced, 33-piece menu, which Mr. Wilson called “typical bar food, but a lot more elevated” – was built from conception to execution to refinement in just four weeks. 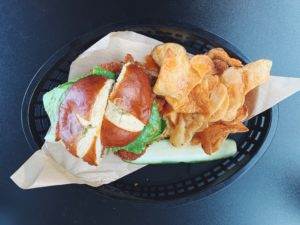 A buffalo chicken schnitzel sandwich – topped with a whole jalapeno popper – is listed a must-order at $14. / PHOTO BY EMILY GOWDEY-BACKUS

The first of three planned menu updates across the tri-brand company, Mr. Wilson married traditional pork schnitzel and a southern fried chicken sandwich – the perfect pair to a second Saturday-afternoon pint – with two chicken schnitzel sandwiches with opposite flavor profiles.

A buffalo chicken schnitzel sandwich topped with a blue cheese-stuffed jalapeno popper, hits the mouth with a bang. At $14, this crispy patty paired with the heat of buffalo sauce and jalapeno will entice any spice fanatic. Don’t fret, a calmer version of the sandwich – caramelized onions, Dijon aioli, and baby arugula – is available for $12.

Launched on the first day of autumn, the pulled pork slider is the answer to Monday’s change in season. For $11, a diners’ cravings for foliage, apple season, and sweater weather are satisfied with the apple, cabbage slaw piled high on top of the tangy pork slider.

burger and paprika-aioli fries are unlike any other in the city.

The menu’s enigma is a plate called burnt ends, a favorite of Mr. Wilson’s. While the Beer Garden doesn’t offer a dessert menu, these bite-sized pork belly cuts coated with an in-house stout beer barbeque sauce could easily satisfy a late-night sweet tooth. With a maple tone, they offer a toffee-like crunch followed by a savory punch.

Presented in a basket to share, they’re easily a weeknight dinner or the perfect partner to a tall boy.

Echoing his desire to run a sustainable kitchen, burnt ends also allow Mr. Wilson to use all parts of a cut of meat – let alone exercise his creativity. 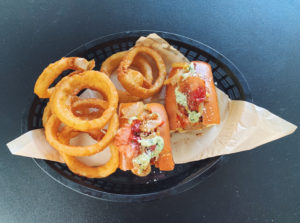 Topped with fried tasso ham, parmesan cheese, lime aioli, and a tomato-bell pepper relish, the Italiano is a spicy sausage that packs some heat. / PHOTO BY EMILY GOWDEY-BACKUS

With vegan and gluten-free options, all are wilkommen im Birergarten. (welcome at the beer garden).

A graduate of Johnson & Wales University in Providence, Mr. Wilson joined the Grid Hospitality team in early August after honing his taste buds and gastronomic awareness with Hilton Hotels & Resorts and the Walt Disney Co.

On Wednesday, a new menu will be rolled out at Craft Table & Bar, “the flagship” of the company, said Mr. Wilson.

A “local, sustainable, and seasonal” focus drives the kitchen – “the heart” of all three restaurants – said Mr. Wilson.

Laughing, he said he may as well get a tattoo of the three-word mantra.

Revolution Pie & Pint’s menu will also be updated in the coming weeks.

Emily Gowdey-Backus is the director of communications at the Worcester Regional Chamber of Commerce. She can be reached via email.