Throughout history, we’ve seen scammers and swindlers come out of the woodwork when monetary opportunities present themselves. New currency will always bring out counterfeiters, deregulations on Wall Street will introduce pyramid schemes, and a federal and state influx of dollars have created (and will always continue to create) new groups of people trying to take advantage because of a shortage of oversight.

So, when I say, “businesses beware,” you might think I’m talking about national concerns on the evening news. Unfortunately, I’m not talking nationally. I’m talking locally, right here in the City of Worcester.

At the time of writing, Worcester’s new city councilors have been in office for a month. During the campaign, several candidates emerged with new ideas and concepts. Looking at the issues which impact our city through a different lens certainly helps to bring new perspectives to the table, but these new ideas shouldn’t always come at the expense of our business community. Sadly, it seems we’re already running into that issue—and again, we’re only a month in.

Make no mistake: like any good corporate citizen, the Worcester Regional Chamber of Commerce encourages the voicing of opinions, open discussion, and healthy discourse. It’s what makes a democracy a democracy. However, those arguing the pros and cons of any particular issue should respect each other’s viewpoint and refrain from needless rancor.

As the largest chamber of commerce in New England and the primary advocate for the region’s business community, it is, of course, our job to act in the interests of businesses and organizations across Central Massachusetts, including in Worcester. Suffice it to say that when government and other key stakeholders are doing wrong by our business owners—who are, quite frankly, the backbone of our local economy and often intricately involved in the community—it is our responsibility to do something about it.

At the January 25 Worcester City Council meeting, I spoke on behalf of the Chamber in opposition to a petition that was filed by a Worcester resident asking the city to enact and enforce a vaccine mandate which would have required proof of vaccination in order to enter all restaurants, gyms, and entertainment venues in the city. Understandably, the petition garnered attention in the community, online, and in the news media. I was one of 285 people on the call since these meetings are being held virtually.

I argued that, during this time when our small businesses—specifically our restaurants, hospitality venues, and arts and cultural organizations—have been disproportionately impacted by the COVID-19 pandemic, government should not be placing additional burdens on them. Frankly, mandating a vaccine passport in the City of Worcester would be detrimental to our business community.

We, at the Chamber, believe in science and data, and we defer to medical experts to make the right call when it comes to public health orders during this pandemic which we all want to see end. We continue to encourage everyone who is eligible to do so to get vaccinated and boosted against this virus.

What we don’t believe in or encourage, though, is making local business owners pay for others’ decisions to not get vaccinated. Considering all the other challenges businesses are currently dealing with—including supply chain and labor shortages, an onslaught of overhead bills like the unemployment insurance trust fund deficit, and increases to both the minimum wage and the Paid Family and Medical Leave funding—adding this vaccine mandate would have severely jeopardized the well-being of businesses and the local economy.

Worcester’s City Council isn’t the only group of people who have decision-making power. There are numerous boards and committees in the City of Worcester which can also affect businesses. “How?” you might ask. Well, let’s consider the last few zoning board of appeals hearings that had two similar items on their agendas.

Last December, an owner of a parcel of land on Park Avenue petitioned the zoning board for approval of a new gas station and car wash on land which had not been redeveloped in 20-plus years. In Worcester, regardless of where the site is or whether it’s zoned correctly, a petitioner for construction of a new gas station must apply for a special permit.

This owner did a careful traffic study, sought out the highest-grade materials so as not to disrupt the ecosystem, and poured thousands of dollars into an engineering survey that included adding greenery and beautification to a run-down parking lot. Regrettably, this zoning board was swayed by the outrage of and personal attacks by some individuals who appear to have their own agenda.

One month after that hearing, some of these same people again tried to convince the board to deny another petition. Due to their success the first time around with the December hearing, a developer who was trying to build a gas station on a South Quinsigamond Avenue parcel of land decided to pull their application. Put plainly: this very vocal group of individuals is discouraging economic development in the city.

With these recent denials of gas station petitions at the zoning board level and
the associated momentum, the council was then petitioned to change the zoning ordinance altogether to never allow another gas station to be built in Worcester. Thankfully, that petition was denied—but just barely. The divided council voted 6-5 at the February 1 meeting to table this, effectively killing it.

Seeing as there’s already a special permitting process in place here in Worcester that these property owners must go through, that process can and should be respected. People’s private property rights need to be respected.

While the Chamber supports many policies that will transition us to a green energy future, the idea to drastically change the landscape of our refueling stations when only 4% of all vehicles currently on the road are electrified is not productive or realistic.

Certainly, the transition to more electric vehicles is on our country’s horizon. Prominent companies nationwide like Ford and General Motors are currently spending billions of dollars building brand-new auto plants and retrofitting existing auto plants to facilitate the manufacturing of electric pickup trucks. Accordingly, rather than preventing the construction of all new gas stations in the city, the conversation should center around ensuring that new stations have conduits for electrical capabilities built into them and will be able to pivot to meet that demand when the time comes.

The current City Council needs to understand the importance of small businesses and the private sector in having a strong local economy. They need to remember that businesses in our city get hit with challenges on several fronts. The City of Worcester already has the sixth-highest commercial/industrial tax rate out of the 351 municipalities in the Commonwealth. So, whether it’s this annual tax classification debate which consistently results in the business community paying much higher taxes than residents, or weekly petitions which come up on the council agenda, we maintain that Worcester need not be the residents versus the businesses.

Let’s not forget that a significant part of what makes Worcester—New England’s second-largest city—so attractive to employers, college students, families, and visitors is indeed the strength, diversity, and uniqueness of our business community. In many instances, what’s best for these businesses is often what’s best for the entire city, be it directly or indirectly.

Alex Guardiola is the VP of Government Affairs & Public Policy at the Worcester Chamber. He can be reached by email here. 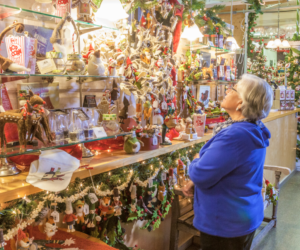