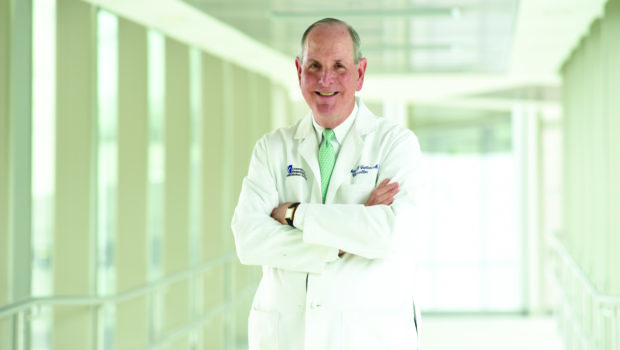 Much of the philosophy behind recent announcements by the University of Massachusetts Medical School can be summed up by an image that hangs above the chancellor’s desk.

Painted in 1863, Sir Luke Fildes’ “The Doctor” is a somber scene in which a doctor sits at the side of a child suffering from tuberculosis, its parents in the background distraught.

But what the chancellor sees speaks enormously for how he has led the medical school and what is to come in the next few years.

“There’s no CAT scan, MRI machine, no lab tests or antibiotics,” said Chancellor Michael F. Collins, M.D. “What is there is a caring relationship between doctor and patient.”

He hangs this picture over each of his desks to remind him of what’s at stake and reiterate the importance of the work of his faculty, his students, and his researchers.

Below, are excerpts from an interview with Chancellor Collins the Chamber conducted in mid-January chronicling his time at the medical school; the institution, city, and regional role in bio-medical research universally; and the decision to augment campus services with the addition of a Veterans Affairs community-based outpatient clinic.

In 2005, you were appointed chancellor of the University of Massachusetts Boston campus. What was your focus in the Commonwealth’s Hub and what drew you to Worcester three years later?

While chancellor of the Boston campus, I was asked to come here as interim, my predecessor had stepped down and they needed someone. The focus of the Commonwealth at that time was life sciences, the new initiative then-Gov. Mitt Romney was putting in place, and there was going to be a $1 billion investment made in the life sciences. In a way, the university was asking me to be the point person on that and to represent the university and medical school interests with respect to that.

There’s only a little bit of competition between Worcester and Boston. What was it like, staying in the UMass system, but going from Boston to Worcester?

I never felt any competition. Our government, its leaders, and the civic-minded folk in Worcester are all about getting things done. That’s no knock on anywhere else, but I find it’s a very can-do place. For me to come here and say can we create a richer science environment, can we expand, can we think about the potential for Worcester as a greater life sciences hub, has been some of the excitement of being here.

I find it hard to make lots of outside meetings just because my job here requires quite a bit of travel so I’ve been fairly selective. I am quite community focused and we have been working closely with entities within the community that don’t necessarily take my time but rather my support and encouragement. That’s also a role we can play.

You’ve shown that your, and the university’s, engagement with the community, for example knowing the VA Hospital was a necessary unavailable resource, is strong.

A person who serves the nation in the military should be looked after and institutions, like ours, that provide care, should be part of that [network].

There was a report six to eight years ago about access for veterans to services in their community and Central Massachusetts didn’t fare very well. At the time, I said to our folks, I want to be on a list where we’re doing great things so we began a dialogue with the VA. Shortly after, the VA opened three clinics here at the medical school – podiatry, optometry, and audiology – and some specialty and mental health services in the ambulatory care center. … [What came about was a] VA community-based outpatient clinic which should allow folks to have a closer relationship to the community and to our care givers.

Frankly, if you look after veterans when you’re learning you’re much more inclined to look after veterans when you’re in practice … you feel comfortable with it, you’ve learned how to do that, you see the importance of it, and, particularly with the veterans, you get a tremendous amount of encouragement and support. … Some of the best medical experiences I had during my training were at VA facilities and I want our students to have that opportunity.

How will the new VA facility expand on what services already exist in Worcester?

The one to be built on the UMass campus will mark a significant improvement in space, access to specialty care, and proximity to an academic health sciences campus.

Why was UMass, specifically, the best teaching school in the area to outfit this new facility?

I’m probably the least militaristic person on the face of the earth, but as a doctor, when you look at someone who is willing, able, and has served the nation, I feel a responsibility to look after their health care needs – always have. If you’re willing to make that sacrifice for the country, then the country should do something for you. Because we have a system that provides care to veterans, what better way to do it than to provide it in an academic location close to home?

There’s a historic relationship in academic medicine with the VA. In fact, if you were to look at medical schools around the country you would see many have [long-term] relationships with the VA. When I was at the Jamaica Plain VA as a medical student … you were darn proud to wear your coat.

[Today, a partnership between UMass Medical School and the VA] would foster education for our learners, research for those who investigate, and care for the special patient population.

And … this is going to be right on Rt. 9 with a big American flag and our two logos right there – the messaging is going to be awesome. The public medical school and the Commonwealth are here to take care of the veterans.

Will it play a role in local economic development?

Well, there will be new jobs and … I don’t know how many patients will come every day but we have 270 parking spots and if we turn that over five times a day that’s [more than] 1,000.

What feedback have you heard from the UMass community?

It couldn’t be more positive. People are thrilled. If you were to take a poll asking if people want to take care of the veterans, the people in the med school would all say yes we really want to be part of that. We also have a number of students with military backgrounds who are very, very excited. I have a fourth-year student who is working with me now on a capstone project on this exact thing. There’s not a downside to this, anywhere, other than it’s going to take us 20 months to get it here.