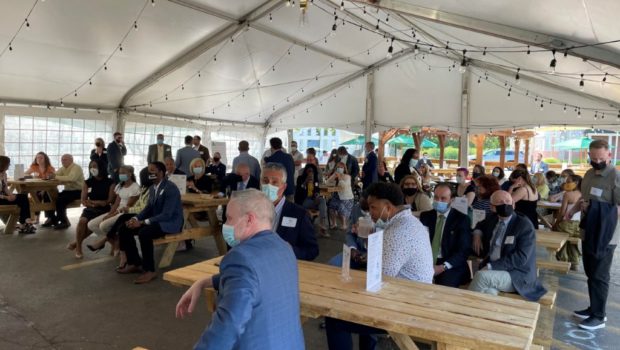 Businesspeople join a chamber of commerce to broaden their networks. New people. New opportunities. New ways to learn about a community. 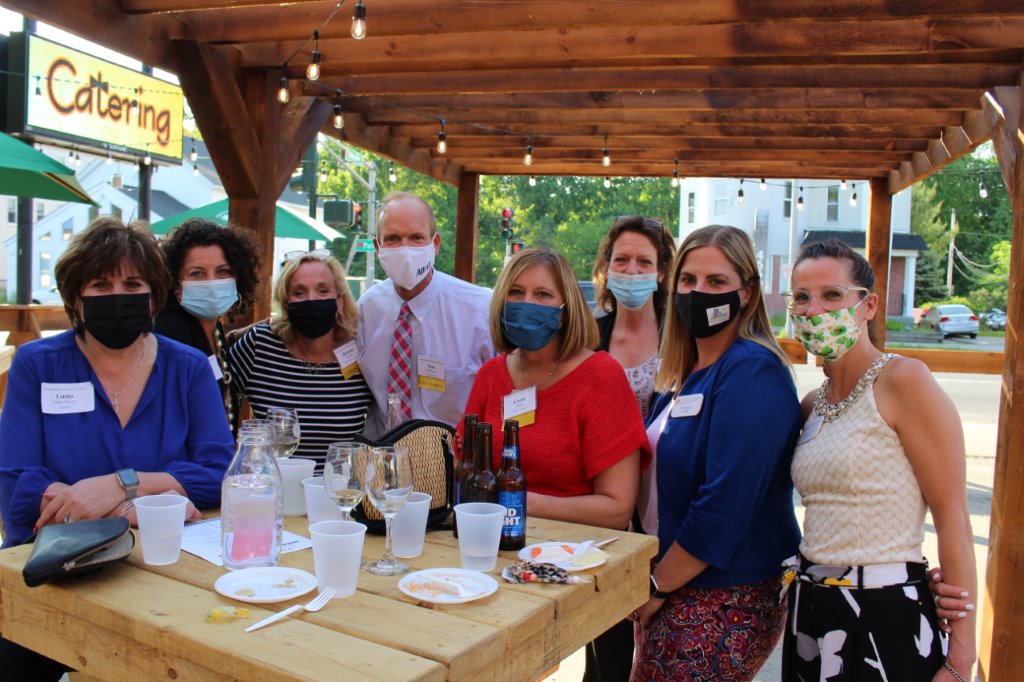 Masked up and ready to network at Peppercorn’s Grille & Tavern during the Chamber’s 2021 Business After Hours Annual Business Awards ceremony. Photo by Dominique Goyette-Connerty.

Throw a pandemic into those plans, however, and networking just doesn’t look the same. But for many Worcester-area business owners and staff members, whether it takes place in-person or online, networking has remained at the heart of their sales strategy throughout the last year.

“It’s just another way of communicating with people face-to-face miles apart,” said Alex DeQuattro, smiling during a Zoom call conducted from his car in a parking lot. District Sales Coordinator for Aflac and chair of the Worcester Regional Chamber of Commerce’s Ambassador Group, he said of the three parts of his business, cold calls, referrals and networking, networking is still the most effective.

Mr. DeQuattro also is a member of the Chamber’s Connect for Success networking Group 2, which shifted to virtual meetings almost immediately. The group has grown, gaining new members even during the pandemic.

“We’ve got a well-versed and diverse group of people that enjoy meeting and sharing a lot to help each other,” he said.

For fellow Group 2 member Suzanne Wigen, that’s exactly what she wants. As a Career Options Coordinator for Horace Mann Educational Association (HMEA), she said networking with the Chamber’s referral group members “helps me learn about the community … the businesses and their hiring needs.”

A peer group of job developers whose meetings Ms. Wigen had regularly attended also shifted to a virtual format, after an initial pause. Two-hour in-person meetings became one-hour Zoom calls every other week to discuss “needs and leads” for local jobs.

Relying on virtual meetings has meant networking no longer has geographic limitations for some business owners. Karen Ceppetelli, EA, has built much of her business, Acorn Business Advisors, through referrals over the last 20 years. While a member of the Chamber’s Connect for Success Group 1, she also belongs to a national networking organization and several women business owners’ groups.

“I was able to visit one group meeting in Hawaii,” she said. “It was the week before Christmas – everyone was in T-shirts and sundresses with Santa hats!”

The Chamber’s Roundtable Forums also quickly pivoted to alternative formats to meet their member needs. Michelle Memnon, who co-chairs the Diverse Professionals Roundtable with Eurayshia Williams Reed, said their 50-plus members have appreciated first quarterly, and now monthly, online meetings for a mix of educational and social purposes. The May 2021 meeting, for example, hosted a panel of WooSox executives, after a Cocktail Connection in February and a March session on mind-mapping.

“I’m always excited to be connecting with someone,” said Ms. Memnon, whose business, Spiritually Fabulous Ministries, is a service-oriented enterprise with a mission to inspire others. An author and designer of “She Ties” accessories, in the past year, she has participated in Boston vendor markets both outdoors and in repurposed mall spaces.

In-person contact, when carefully planned, became a novel way to network for Charles D. B. King II, co-owner of Fast Signs in Worcester. He and his brother launched in January 2020 with a carefully crafted business plan. COVID-19 shifted the business landscape, but walk-in business was never a focus for his customer base of small- and medium-sized businesses, he said.

Instead, “the goal was always to grow through relationship building.” Declared an essential business, Fast Signs generated goodwill by printing a few dozen “Open for Takeout” banners. Team members dropped off the free banners at local restaurants, together with a business card.

“We thought restaurants were probably the hardest hit, so we wanted to do this as a gesture,” said Mr. King.

Whether masked in-person or on screen in a Zoom box, Chamber members continue networking with prospective customers and referral sources. Building those relationships remains essential. As Mr. DeQuattro advised, “No one’s going to do business with you if they don’t know, like and trust you.”

Allison Chisolm is a correspondent for Chamber Exchange: The Newspaper. To contact the publication’s editorial staff, please email the Chamber’s Director of Communications Dominique Goyette-Connerty. She can be reached by email here. 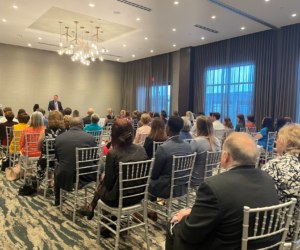