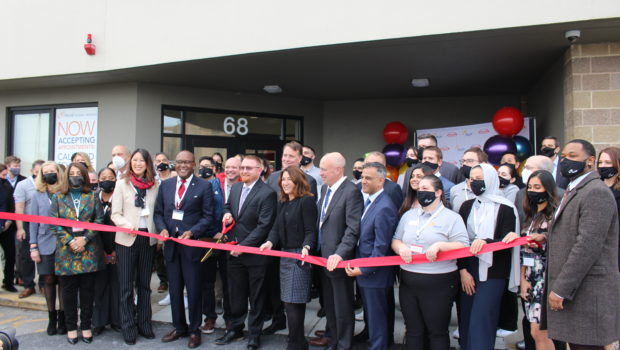 Two global companies in the health and biopharma spheres now have a local presence, too, after both opened locations in Worcester toward the end of 2021.

In November, Grifols opened their 300th Biomat USA plasma donation center in the country and their first in Massachusetts. The center is located inside the brand-new Veterans Affairs building on UMass Chan Medical School’s campus.

At the same time, Takeda Pharmaceuticals opened their 161st BioLife Plasma Services donation center on Worcester’s Stafford Street in the Webster Square Plaza. Though this was also their first Massachusetts location to open, the company is no stranger to the Bay State—Takeda’s U.S. headquarters are in Cambridge.

Once at full operation, the two centers expect to bring a combined total of just over 100 jobs to the city.

There are few plasma centers in the northeast region—although Grifols and Takeda are working to change that—so, many people in this area are unfamiliar with plasma and what it is exactly.

Plasma is the fluid portion of the blood containing several proteins and antibodies critical to human health. It makes up about 55% of whole blood and is approximately 90% water.

Plasma has been in the news more recently because, at the height of the COVID-19 pandemic, experts in the medical field were collecting convalescent plasma of those who’d already contracted and recovered from the virus so that they could turn it into plasma-derived therapies to treat COVID patients.

What many aren’t aware of, however, is that plasma donation centers and the use of plasma-derived therapies are nothing new. For decades, plasma has been collected from donors and used to “make life-changing therapies for those who can’t make those pieces of plasma themselves,” said Tyson Brimberry, plasma center group manager at BioLife’s new Worcester location.

There are hundreds of diseases and chronic illnesses treated with plasma-derived medications. From hemophilia, to immune deficiencies, nerve disorders, and more, there are thousands of patients around the world who rely on plasma-based therapeutics. According to Whitley Moguel, center manager at the new Grifols Worcester location, their company makes somewhere between 20 to 30 medications for more than 180 different diseases.

The challenge is that the medical community has yet to figure out how to synthetically manufacture these proteins and plasma. “Plasma can’t be made in a lab,” said Mr. Brimberry. “It has to come from human donors. If we don’t have those donations, these individuals can’t live their lives.”

“So that’s where we come in and that’s why we need donors,” said Ms. Moguel. “It can make a huge difference for someone. For our patients, it’s what makes them able to go out into the world—especially during a pandemic when they’re extremely high-risk. So we’re the very first step in being able to help someone live a normal life.” 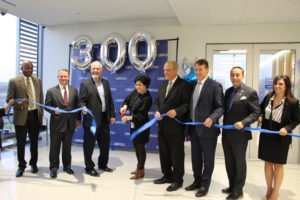 The Grifols team and local leaders cut the ribbon on the company’s 300th plasma donation center. Photo by Dominique Goyette-Connerty.

So what is the plasma donation process like? At centers like BioLife and Grifols, state-of-the-art technology is used to draw the whole blood from an eligible donor. The machine spins out just the fluid portion—the plasma—then returns the red blood cells to the donor through the same needle. This draw-and-replace process happens in cycles until the appropriate amount of plasma from that specific donor is collected.

Unlike a regular blood donation, since the red blood cells are returned to the body during a plasma donation, people are able to donate up to two times per week, as long as there’s at least one day of rest in between donations. With a regular blood donation, a donor must wait approximately 56 days. But with plasma donations, “since your body regenerates that plasma very quickly, you’re able to do so [donate twice per week] very safely,” Mr. Brimberry explained. And because plasma is roughly 90% water, “the more hydrated you are, the better the donation goes.”

But prior to donating, there’s a thorough safety process potential donors must go through to determine eligibility. “We do a lot of checks and balances to make sure the donor is healthy enough to donate their plasma, and that the plasma they donate is healthy as well for the patient,” Ms. Moguel said.

“The first visit is a little longer because we go through medical history and review medications the donor takes that could affect the plasma they’re giving. We do a non-invasive physical assessment to ensure there are no underlying medical concerns. And we check all the vitals, proteins, and make sure the hematastat is good,” she explained. “Again, that’s to make sure the donor is safe and the product is safe.”

That initial visit takes an estimated 2.5 hours. However, for repeat donors who’ve already been determined to be eligible, each visit is about an hour. BioLife centers require donors to make an appointment via their website or mobile app; Grifols centers offer appointments if you’d like, but otherwise accept walk-ins.

Since plasma donation is somewhat of a time-consuming process and because the need for donations is so dire, both companies compensate donors for each donation. They frequently run promotions offering bonus bucks to incentivize donors to return.

Recognizing “it can be scary to go out there and do something you’ve never done before, especially when it involves needles,” Mr. Brimberry said, “We really try to make the atmosphere very comfortable for people to come in and to keep coming back.”

What unites both BioLife and Grifols, both Ms. Moguel and Mr. Brimberry, and all those across the board who work at plasma donation centers, is their passion for saving lives. It’s pride for donors, passion for patients, and seeing the profound purpose in plasma.

Mr. Brimberry, who’s been with BioLife for seven years, remembers one patient in particular whose story stood out to him. This man was in his early-30’s when they met, but he was always sick as a child. He went from doctor to doctor, to no avail. They didn’t think he would live past age 10. “He spent more of his childhood in a hospital than in a school,” Mr. Brimberry recalled. “For me, hearing that made a huge impact. I thought that must have been crazy.”

One day, this boy was finally referred to an immunologist who was able to diagnose him with a rare, chronic disease. “Now, he actually takes one of our medications. He lives a happy, normal, everyday life, and has two kids. You would never know [he had this disease,]” Mr. Brimberry said.

“Hearing that story and dozens of others has just solidified my belief in what we do even more. It’s not just a paycheck. I really do believe in what we do here.”

“There’s an evergreen need for plasma donations,” Mr. Brimberry said, noting the volume of plasma it takes to meet the supply commitment for patients. “For one year of medication, it can take anywhere from hundreds to thousands of donations to make the treatments for just one patient.”

“We’re grateful for our thousands of donors across the world, but there’s still a need.” said Ms. Moguel. “For all plasma companies, there’s been a shortage because of COVID. People are staying home. […] But it’s huge because there are people still relying on it.”

“So even though our donations have slowed down, we can’t. We’re going to keep going.  We’re still here and still need the donations,” she said.

To learn more about plasma, the donation process, and how to become a donor, you can visit both companies’ websites: biolifeplasma.com and grifolsplasma.com. You can also call both Worcester centers directly. For BioLife Plasma Services, dial 508.713.0133. For Grifols, dial 508.793.2905.