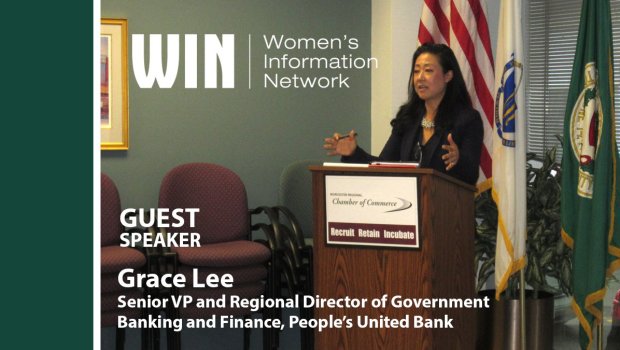 On Tuesday, October 20, the Chamber’s Women’s Information Network (WIN) program held their monthly meeting in the Chamber’s conference room. The 10-month program, geared toward professional women, is sponsored by People’s United Bank. Meetings are held the third Tuesday of the month from September through June and feature networking, lunch, and a guest speaker.

The event kicked off with a hearty lunch and welcoming remarks by Chamber staffer Sherri Pitcher, Director of Business Recruitment at the Chamber who introduced the program sponsor Paul Kelly, the region’s President of Commercial Lending for People’s United Bank.

The October speaker was Grace Lee, Senior Vice President and Regional Director of Government Banking and Finance at People’s United Bank. Ms. Lee spoke about her career path and some of the struggles she faced as she climbed the corporate ladder to a senior position at the bank. Despite being discouraged by family after declaring that her dream was to become a lawyer, Ms. Lee continued to pursue her goal through education and perseverance.

Growing up as a Korean American in California, she witnessed oppression first-hand, including the Los Angeles riots. Most of the riots took place in “K-Town,” otherwise known as Korea town. The social upheaval gave her insight into hate crimes and cruelty in American. As she finished high school and earned her college degree, she was still determined to “fight the man.”

While in law school, a professor suggested she visit the district attorney’s office. She was immediately offended. However, after reflecting on her career path, she warmed up to the idea. In fact, after achieving her law degree, she worked for the DA’s office and very much enjoyed the experience.

Ms. Lee faced a great deal of failure and rejection during her time in the courtroom. As a result, she learned to always have a backbone, but to also be yourself. Even though she was a woman in a “man’s world,” she made herself a dominate force demanding respect from her peers. With the challenges and stereotypes that she faced, Ms. Lee used her failures as an advantages in order to recover and build herself up.

She moved on to law firms to fight for those who experienced hate crimes and prejudices. During her career as a lawyer, grew stronger and began standing up for herself as well. In the male dominated legal profession, Ms. Lee gained the respect of her male colleagues. After many years in the courtroom, she worked hard and changed industries becoming a senior vice president at People’s United Bank.

The overarching message Ms. Lee conveyed to the members and guests at WIN was that to succeed, she pushed forward despite negative influences and pursued continued growth in the workplace. Grace Lee has carried herself with strength and determination throughout her entire career — no matter the challenges and circumstances she encountered along the way.