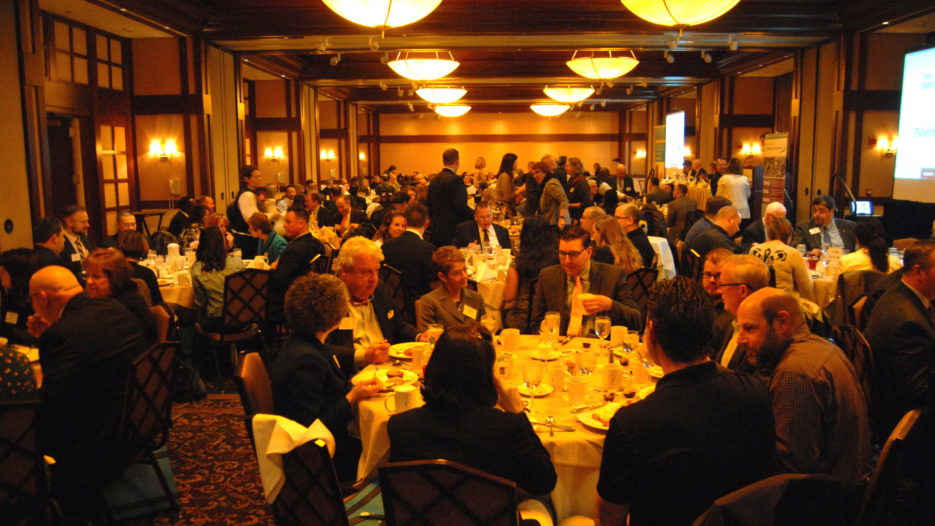 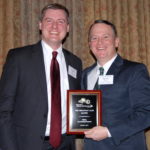 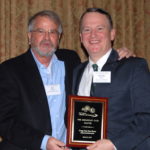 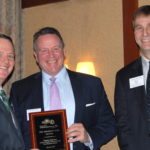 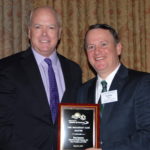 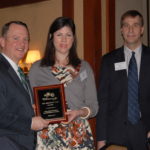 Among those Receiving Special Salutes Included:

McMahon served most recently as the associate director of the Rhode Island Department of Human Services. He was undersecretary for administration in the Executive Office of Labor and Workforce Development in Massachusetts from 2011–2015 and deputy commissioner for the Massachusetts Department of Industrial Accidents from 2007–2011.

He has also held other positions with the University of Massachusetts Medical School and was chief operating officer of the Massachusetts Lottery Commission from 1999–2004.

He holds a master’s degree in public affairs from the UMass McCormack Institute and a bachelor’s degree in business administration from Worcester State University.

A native of Worcester, McMahon has served on the board of directors for YOU, Inc. He and his family reside in Holden and are members of St. Mary Parish in Jefferson.

Catholic Charities was founded immediately after the diocese was founded in 1950. The organization and its more than 250 employees and annual $9 million budget serve more than 40,000 people each year from eight locations, including its Youville House Shelter for Homeless Families, Mercy Centre for adults with developmental disabilities and Crozier House for men in substance abuse recovery.

Kelleher grew up in Worcester and spent much of her free time working at the family's restaurant, Coney Island. She attended Wellesley College and worked at a small bakery in town during her junior year. That’s the point where she started to realize her love of the kitchen.

After graduating with a degree in English and Religion in 2012, Kelleher then attended the New England Culinary Institute in Montpelier, VT. She moved back to Worcester in winter 2014, just as Crust was opening. She was approached about buying the business by former owners Alec Lopez and Sherri Sadowski. Lopez and Sadowski began the Crust project about seven years ago, although the space was a production facility for Armsby bread for the first four years. Their goal was always to turn the space into a retail bakery, and, eventually, they did want to sell it because their primary focus and love has always been Armsby Abbey.

The focus for Crust has always been to make wonderful products. Bread takes a lot of time and knowledge. All of Kelleher’s bakers are skilled in the art of bread baking and take an enormous amount of pride in the product they produce. The bakers also have pastry and other confections.

Celebrating its 50th anniversary this upcoming summer, Dodge Park Rest Home in Worcester fights cognitive decline by encouraging residents to engage in both mental and physical exercise. Led by Executive Director/Owner Micha Shalev, they call their program Cognitive Engagement Therapy Techniques. The program at Dodge Park Rest Home is exceptional because they have a full-time activity professional in every wing every day.

The smaller environment and high staffing ratio allows staff to provide specialized individual activities for the residents. Research shows that keeping minds active not only helps maintain mental functions, but may actually improve abilities even in individuals with dementia.

Over the past three years, Dodge Park also planned for future growth with construction of the Oasis at Dodge Park, which recently opened. After phase 2 completion, Oasis will serve 82 residents with memory impairment such as Alzheimer’s disease and other forms of dementia.

Under the leadership of President Steve Goodman, GFI Partners, a full service real estate advisor based in Boston, is actively developing the former US Steel Facility at 150 Blackstone River Road in Worcester. The 615,000-square-foot multi-use industrial warehouse and distribution center broke ground in late October 2015 and the facility has been fully leased.

The first 325,000 square feet will house Imperial Distributors National Headquarters and scheduled to begin operations in January 2017. Imperial, a provider of non-food products to 3,500 retailers, will relocate to 150 Blackstone River Road. The new facility will bring Imperial’s entire team together in one place, and its ideal location will allow the company to retain a talented workforce. Additionally, Mid-States Packaging Inc., a full-service transportation and logistics company, and long-time tenant of 150 Blackstone River Road will occupy approximately 67,000 square feet of warehouse space. The remaining 228,000 square feet is leased to an International Beverage Distributor, Gallo Wines, and the entire project is slated to be completed in February 2017.

19 building, 349,000-square- foot campus located on 25 acres was originally built in 1803 as a coeducational high school and in 1836 devoted itself to an all-girls college. GFI permitted the project for a new residential neighborhood on the college’s former playing fields and the campus buildings were sold to Zion Bible College.

Jonathan E. Church of AICP serves as the Administrator of the Worcester regional Transit Authority in Worcester. The WRTA is the second largest regional transit authority in Massachusetts and is given general responsibility to develop, finance, and contract for the operation of mass transportation facilities and services for the City of Worcester and 37 surrounding communities

Church has over fifteen years of experience in the transportation profession and has been a member of the American Planning Association’s American Institute of Certified Planners since November 2006. He is the former Vice-President of Chapter Affairs for the APA Massachusetts Chapter. He holds a Master’s Degree in Urban and Environmental Planning and a Certificate in Historic Preservation from the University of Virginia at Charlottesville and a Bachelor of Science in Environmental Design from the University of Massachusetts at Amherst.

Kurt Isaacson, M.B.A., joined Spectrum Health Systems, Inc. in 2013 as Chief Operating Officer, a position he held for three years before being appointed President and Chief Executive Officer in 2016.

Isaacson has been instrumental in Spectrum’s significant growth and expansion since joining the organization, including the opening of six new outpatient treatment centers and two new residential treatment facilities - the New England Recovery Center and the Charles J. Faris Recovery Center, both in Westborough. He is a seasoned behavioral health administrator, having more than 30 years of experience managing a number of multi-site organizations located throughout the country. Prior to joining Spectrum, Isaacson served as the CEO of two psychiatric hospitals in Mississippi and Indiana, as well as the senior vice president of operations for a behavioral healthcare system in Vermont. Isaacson holds a Master’s degree in Business Administration and a Bachelor’s degree in Health Services Administration. 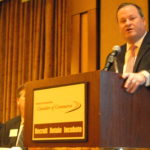 Speaking before a packed crowd at Beechwood Inn March 9 during the Worcester Regional Chamber’s monthly Breakfast Salute, Coughlin told listeners that Mass Bio is the first trade organization of its kind founded in the world back in 1985 with 100 percent funding coming directly from that industry. “What makes Massachusetts unique is we have industry, academia and government all working as partners,” adds Coughlin. “That started with Tim Murray as lieutenant governor and is continuing now.”

The billion-dollar Life Sciences Initiative that began 11 years ago in Massachusetts is paying off - despite political party change in the governor’s office - and that all starts and ends at the local level. “Worcester on its own is one of the top bio-tech clusters in the United States,” says Coughlin. “This goes back to making sure we have anchor tenants like UMass and incubator spaces to attract small companies.”

Based on the latest industry statistics, BioPharma industry employment in Massachusetts grew by 4.2 percent in 2015, with a whopping 37 percent growth percentage in jobs over the past decade. “During 2007-2011, there were no IPOs, but we were still able to grow because we had a strategic plan,” says Coughlin.

Specifically, Coughlin and his team targeted large bio-pharma manufacturing companies to evolve from mainly developing big R&D campuses to downsizing that aspect of the business and instead pursue business development licensing deals with smaller firms. Today, 14 out of the top 16 bio-pharma companies in the nation not only have deals going on here in Massachusetts, but they have a physical presence as well. More than 50 biotech companies now do business alone in the Worcester and MetroWest region.

What makes Massachusetts and Worcester unique to this industry, adds Coughlin, is their penchant for early stage research and development employment clusters backed by National Institutes of Health funding. UMass Medical School ranked third in the state for such grants over the past 11 years with 325 awards totaling $131,445,732. “R&D leads to all the other benefits of BioPharma manufacturing. Massachusetts has the highest concentration of R&D employees in the world,” says Coughlin. “It’s collegiate brain power coupled with great medicine happening at the hospitals that turns into these companies.”

Outside of Cambridge and Boston which are beginning to reach maximum development build-out thresholds, Worcester County has the third highest number of BioPharma employees in the state compared to 10 years ago when the city was only merely mentioned as a possibility for future bio clusters. Currently, Worcester has 1,775 employees in R&D and greatly contributes to the state’s half share of the estimated 63,000 nationwide jobs in biotech. Massachusetts now has more employment classified as Biotechnology Research and Development than any other state. Massachusetts grew BioPharma jobs by almost 7,000 jobs since 2007, second only to California, with annual salaries of $147,432. Mass Bio forecasts the total increase jobs by May 2018 to be 4,325 new jobs, a 6.7 percent increase from May 2015.

Most significantly, Mass Bio has seen the most growth in drug-device combinations and diagnostics. Over 9 million square feet of commercial lab space has been added to the Massachusetts market since 2007 and it’s virtually all filled. Of that 9 million, 4 million square feet has been added since 2013. Last year alone, Mass Bio welcomed 190 new companies and today enjoys more than 1,000 members compared to 300 a decade ago. All this growth has led to growing interest from venture capitalists, with Massachusetts-based VCs investing over $596 million into the state’s bio-techs, representing 25 percent of the total investment. Massachusetts -based VCs provided 79 percent of the total seed capital and 49 percent of Series A funding for Mass. bio-techs in 2015.

“The VCs were panicking in 2007-2009,” says Coughlin. “But once we recruited big Pharma to Massachusetts, that’s when the IPO market came back perfectly in 2012, which will carry us through future economic downturns.”

Additionally, Massachusetts-headquartered companies have developed 506 products that focus on a wide range of therapy areas. That includes 190 currently marketed products, with the Central Nervous System, Dermatology and Respiratory products topping that list. “We’re in the business of inventing new drugs,” says Coughlin. “The future is bright. We’re getting to the point where you can’t put labs on top of labs. Bio-manufacturing is growing and you’re not going to put that all in Cambridge and Boston. Worcester can take advantage of this.” 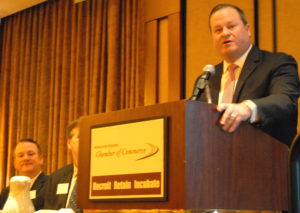 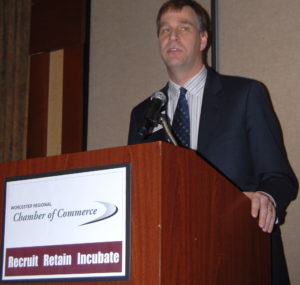 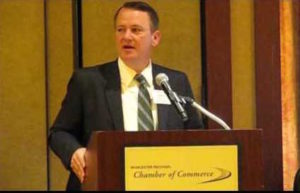 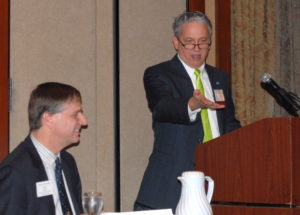 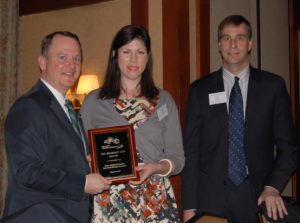 All Video Salutes to Breakfast Honorees 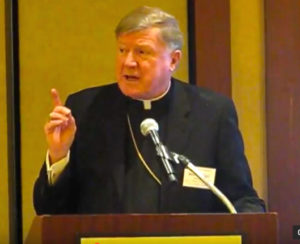 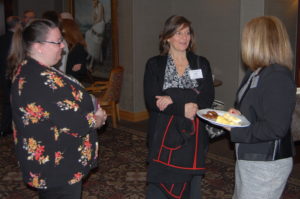 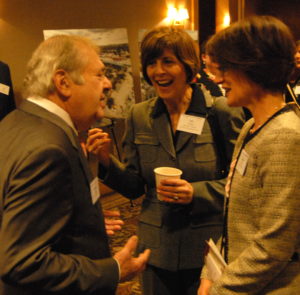 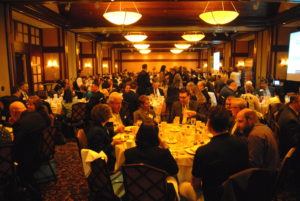