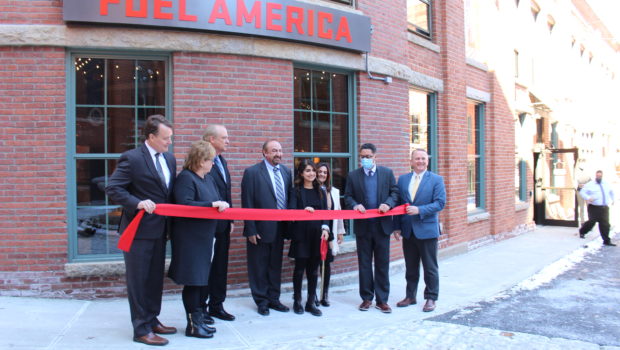 For Hamid and Neelu Mohaghegh, “family” is more than blood relations and more than a buzzword in their company’s name.

With his business experience and real estate expertise, and her creativity and passion, the father-daughter duo is working to make meaningful, community spaces in Worcester’s Gateway Park area to bring cohesion to the neighborhood.

In 1973, Hamid Mohaghegh emigrated from Iran to the U.S. at 18 years old for college. To pay tuition, he worked two back-to-back factory shifts—including at Reed and Prince Manufacturing, Johnson Steel & Wire Co., and Parking Manufacturing Co.—but realized that just making ends meet wasn’t going to suffice much longer. “It kind of pushed me to become an entrepreneur,” Mr. Mohaghegh recalled. “For many coming from abroad […] the opportunities in the U.S. are fabulous for allowing people to try and work hard to make it.”

He started an ice cream truck business, driving around the city to ballparks and other common areas, and was able to do well for himself—and for his wife and brother—financially.

After graduating from pharmacy school in 1979 (and obtaining citizenship in 1977), Mr. Mohaghegh stayed in the U.S., and, as he had children and started a family of his own, worked in several executive-level positions at places like Holden Pharmacy, Harrington Hospital, and Heywood Hospital. He also worked in a Dubai hospital for a few years before deciding to go back to working for himself.

In 2000, Mr. Mohaghegh started Family Pharmacy, an independent chain of pharmacies across the Commonwealth. At its peak, the company had 114 employees and 13 locations in Massachusetts. While his corporate office was located in the Northworks building on Worcester’s Grove Street, the gentleman who owned the former factory at the time got to know Hamid and his brother, and told them he’d like to sell them the building.

Since making that purchase in 2012, Hamid’s continued to grow his real estate portfolio, acquiring several commercial properties over time. He eventually downscaled the Family Pharmacy business (which is now just one location: Prescott Pharmacy) and morphed it into Family Grounds, Inc. Today, Mr. Mohaghegh owns about 13 acres of land in the Gateway Park neighborhood, housing 70-plus businesses across the Grove Street and Prescott Street properties. The only properties he doesn’t own are 108 Grove St. and the space occupied by Rainbow Furniture.

Despite all this growth and professional success, for Hamid, “Money doesn’t mean anything.” Rather, the main thing that matters to him is family. “I adore my children. My whole energy comes from my children.”

And in his family, the apple certainly doesn’t fall from the tree. His 26-year-old daughter, Neelu, mimics her father’s entrepreneurial spirit.

A graduate of Boston University with an artistic eye and a passion for creating, Neelu’s career landed her in the music industry, doing digital marketing and advertising for event venues and working as a music journalist—that is, until the COVID-19 pandemic left her furloughed and with extra time on her hands to ponder the future of her profession. Out of work, she moved from L.A. back to the east coast to be with family.

But the Worcester she came home to wasn’t quite the same as the Worcester she left behind a few years back. “Worcester had changed so much since I was little and I was like, ‘Dad when did all this happen?!’” she recalled. “[I started] realizing Worcester has a lot going on for itself.”

She began helping her father out with the Northworks Building and the business, and he started showing her everything he’d been working on, sharing some of his plans for the space’s future. “I really thought it was cool and that he was onto something,” Neelu said. “I told Dad there could be something in his building that could bring the community together, be a gathering spot and epicenter.”

As someone who used to “coffee shop hop” all through college and grad school, loved to explore cafés wherever she went, and even worked as a barista at one point, Neelu envisioned transforming part of her father’s Northworks Building into a coffeehouse.

Hopeful he could convince his daughter to stay in Massachusetts instead of moving back to the west coast, “I told Neelu this would be a great opportunity for her to, from the ground up, really be involved in the business and learn the real parts of it,” Mr. Mohaghegh remembered.

And “real” it was. From construction and project management to design work, Neelu quickly learned that being an entrepreneur and starting something from scratch isn’t for the faint of heart. She took charge of the buildout transforming part of the bottom floor at 100 Grove St. into the coffee shop of her dreams. 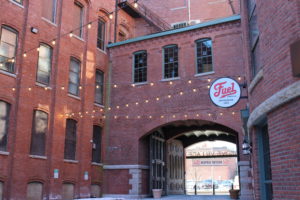 The outdoor space at the new Fuel America feels like a European village. Photo by Dominique Goyette-Connerty.

“It’s been such a journey,” she said transparently. “It’s really, really hard. I know people say that all the time, but now being in it and actually tackling it full-on, I see why they say it.”

Renovating an historic building from 1831 certainly isn’t a walk in the park. And doing it as a budding entrepreneur in the midst of a global pandemic didn’t make it any easier, but, “I’ve never been afraid of hard work,” she said. “I think I learned that from my dad. We’re in there with everybody. There’s nothing that’s below or beneath us. I’m so thankful for a great role model like him.”

While on the hunt for the perfect coffee beans and distributors for the new shop, the Mohagheghs happened to come across Fuel America’s owners, who expressed their dream of franchising. Right away, Neelu knew that their Grove Street project was the perfect space for Worcester’s second Fuel America location. “It already has the industrial vibe. We can bring energy to it, bring modernity to it,” she thought, saying she also loved the Fuel America menu and how they roasted the coffee themselves.

According to Neelu, the former factory’s brick walls, exposed air ducts, and loud pipes just add to that authentic, Industrial American theme which the Fuel America brand was founded on. “It’s all part of the charm,” she said.

Outside the shop, the unearthed cobblestone, string lights, planters, murals, and fountain all set the ambiance for a “European village,” as she describes it.

Reflecting on her career in the entertainment industry, Ms. Mohaghegh said: “I always loved hosting events and putting on something that would create experiences and memories for people. That was always my goal. I was hoping I could build something that, when people left that event or space, they could remember it because they had an incredible time.”

Within the next three to six months, the Mohagheghs plan to open a small market next door to the café which will offer grab-and-go items for locals. Neelu also wants to start hosting more music shows, programming, and pop-up shops with local small businesses inside the Fuel America. “As Worcester continues to grow, we can be a part of that growth,” she said.

Hamid, who’s taken great joy in seeing through his vision of restoring these gorgeous, historic buildings for the city, says what they’ve done in the area so far is just the start. “It’s all about giving back. Especially for my city that has helped me in every way. […] My passion [is] for leaving a legacy behind for my city and as a tribute to my three children who were born here, and to all the greatness I’ve achieved in life here.” he said. “This is just the beginning of it.” 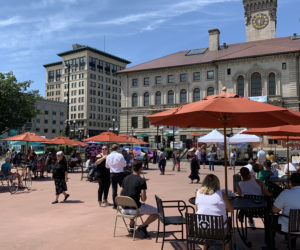 No Timeouts for Worcester Development Plans