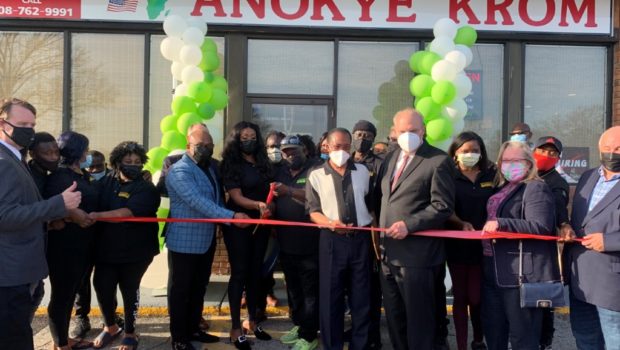 Worcester is home to a large number of immigrant communities, as it has been for its entire history. This international heritage is what makes the city so great, whether it be in the workforce, education, or culture. Worcester’s different immigrant cultures also each bring their unique cuisines to the Heart of the Commonwealth, and Anokye Krom does its part to represent West African tastes in New England’s second largest city.

“With the influx of Africans, especially Ghanaians in Worcester, I felt we needed a place, a hub where after a hard day’s work, you can come in, relax, and have good food and drinks,” said Richard Boateng, owner of Anokye Krom.

Mr. Boateng, a native of Ghana who moved to Worcester in 1997, recognized early on that the city was quickly becoming a destination for the West African diaspora. He wanted to create a place for his fellow Ghanaian immigrants to have a taste of home while living in America.

Ghanaians make up the highest percentage of all 37,000 foreign-born residents in Worcester: 10%, meaning this city has the highest concentration of Ghanaian immigrants in the country.

Mr. Boateng’s restaurant serves a wide variety of West African appetizers and entrees. Among Anokye Krom’s most popular dishes is the jollof rice, which is rice cooked in tomato sauce with added spices and a choice of meat, served with a boiled egg and shredded lettuce. Fried plantains, bean soup, and rice are all popular and delicious sides.

Anokye Krom, which means “Anokye’s village” in one of Ghana’s native languages, is named after the historical leader Okomfo Anokye, who is revered as a legend in West African cultures as a powerful military and political leader in Ghanaian history. Mr. Boateng says this name helps his fellow members of the Ghanaian community feel at home in Worcester.

The best thing about owning a business, according to Mr. Boateng, is providing his patrons with good food and a communal place to gather. He notes that his friends and family will often come to the restaurant after church or sporting events on Sundays for a traditional Ghanaian lunch.

But Anokye Krom is not just for the Ghanaian community – Mr. Boateng wants people from all different backgrounds from all over the area to feel like his restaurant can be a new home for them, or at least their new favorite takeout destination. “Some people always want to look for new places and new food and we can provide that for them,” he said, speaking to the uniqueness of West African cuisine. 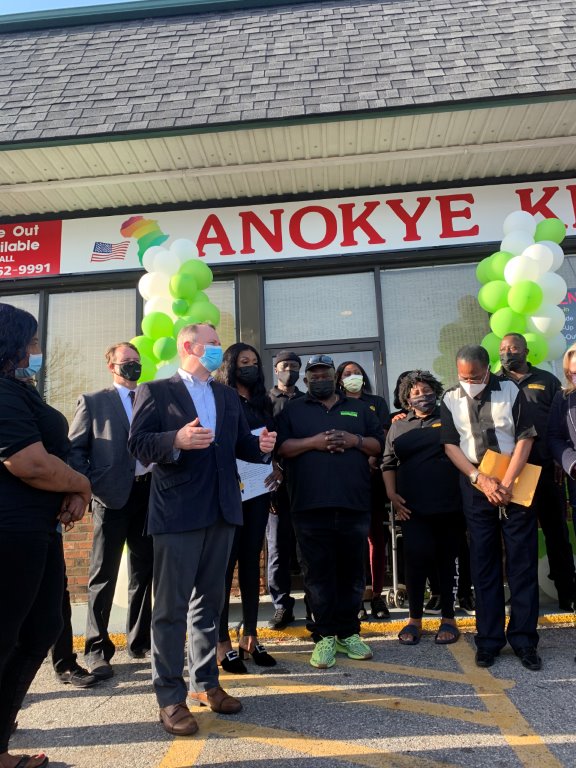 While the COVID-19 pandemic has been painful for the restaurant industry, resulting in thousands of permanently closed food purveyors in Massachusetts in just a year, Anokye Krom is bucking the trend by recently expanding to its second location on Park Avenue.

The initial Anokye Krom location on Millbury Street had problems with parking availability as the business grew, leading Mr. Boateng to select the former location of Thai restaurant Bahn Thai, which closed during the pandemic, as his new flagship location at 2 Coes Square. This plaza right off Park Avenue has a parking lot for Anokye Krom patrons to use.

The interior design features vibrant colors and notes of West African cultures, plenty of booth and table seating, and a bar inside the spacious entrance. The kitchen in the new building, which is larger compared to the Millbury Street location, has already helped the restaurant manage its volume of orders.

The Worcester Regional Chamber of Commerce along with elected officials and other community leaders held a ribbon-cutting in March to celebrate the new location. Mr. Boateng says the Chamber’s help during the pandemic and in acquiring the new location was essential for his business to not only survive, but to thrive.

“The Chamber’s help was an immense contribution,” he said. “All the people at the Chamber made this happen. They want to help minority businesses, small businesses, and everyone in this city.” Mr. Boateng said he had taken the initiative to tell his fellow Ghanaian business owners about the benefits of joining the Chamber like he has already done.

“The rate at which Africans, Ghanaians especially, are coming into Worcester…pretty soon our children’s children will be everywhere in the city,” he said of the growing Ghanaian business community in Worcester.

When asked what was next for Anokye Krom after opening its second location, he noted that he wanted to take things “a step at a time.” While the restaurant has enjoyed considerable success in Worcester, he first wants to be able to find more workers to staff the Park Avenue location. “With cooking ethnic African food, you put in a lot of time and labor,” Mr. Boateng said of his duties at the restaurant, where he doubles as a business manager and chef.

His wife and children help him run the business by cooking and serving, but the challenge ahead is finding people to staff his larger restaurant. For now, the success of opening a new location during a pandemic will have to do.

If you are looking to support local minority-owned and family-owned businesses and experience the cultural tastes of West Africa, consider Anokye Krom for your next dinner or lunch. “Anybody who wishes to try a sizzling hot and well-seasoned meal should come here,” Mr. Boateng noted proudly. “They will love it and not regret coming here.”

Anokye Krom is located at 2 Coes Square off Park Avenue and is available for delivery on DoorDash and Uber Eats. The new location is closed on Mondays but is open from 12pm to 11:30pm Tuesdays through Thursdays, from 12pm to 2am on Fridays, and from 12pm – 12am on Saturdays and Sundays.

David Sullivan is the Chamber’s Economic Development & Business Recruitment Associate. He can be reached by email here.