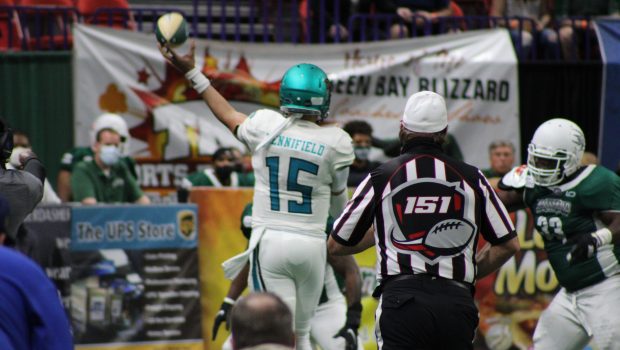 We are fortunate in Central Massachusetts to live in an area with three professional sports teams. In order of their arrival: The Worcester Railers in October of 2017, the Massachusetts Pirates in April of 2018, and now the Worcester Red Sox in May of 2021. All three Chamber members are a result of the renaissance momentum the city has been experiencing in recent years. As we emerge from the COVID-19 pandemic and more people get vaccinated, folks will not have trouble finding things to do, especially if they like live sports entertainment. While many think of baseball as spring arrives, they may be surprised to learn that catching a football game is also an option as we head into the warmer months.

The Massachusetts Pirates are a local, homegrown team who call downtown Worcester’s DCU Center “home.” The Pirates franchise was formed in 2017 and is co-owned by Hassan Yatim and his son Jawad Yatim. The Pirates started off in the National Arena League (NAL), a league that is mostly made up of East Coast teams, with one team from California. The NAL was initially formed to help develop football players in a setting where other professional football league scouts, like the National Football League (NFL), could look to recruit players. Players are also able to stay in football shape and play this game they are passionate about. In their first couple of years in the NAL, the Pirates made it to the postseason in 2018 and 2019. 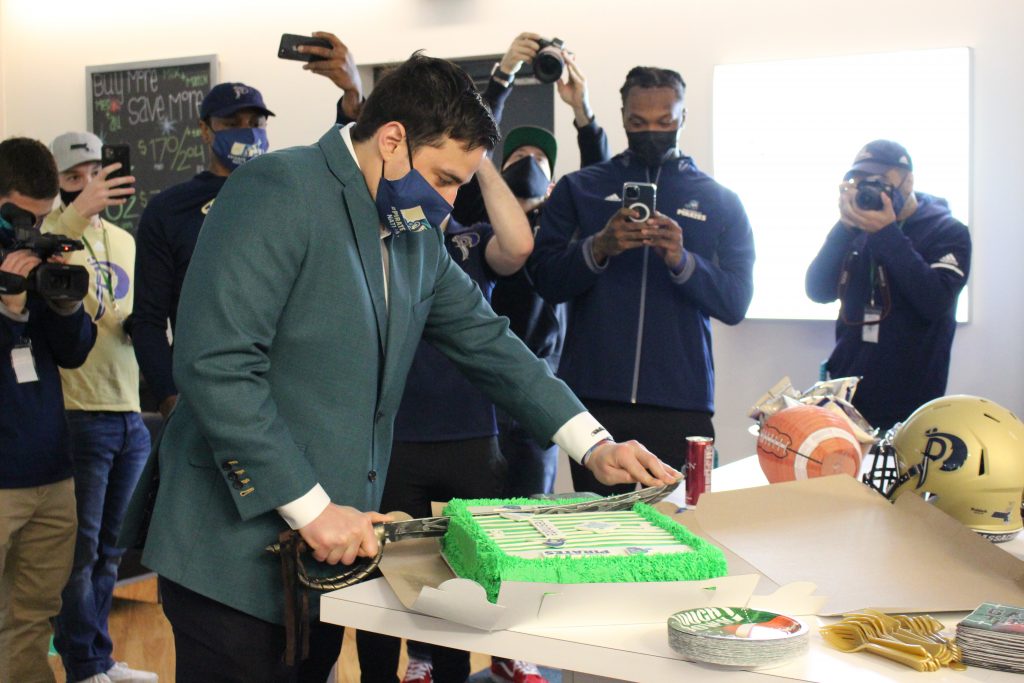 Mass Pirates Co-Owner Jawad Yatim cuts a cake with a sword-like knife at a press conference announcing the partnership between the Pirates and Resinate on April 12. Photo by Dominique Goyette-Connerty.

The NAL typically has a faster-scoring game than the NFL. It is not uncommon to see 10 points go on the board in only three minutes of play. One of the major differences between the two leagues one can see right off the bat is the field. In the NAL, the field is half the size of that in the NFL at only 50-yards long. Another visual difference is the goal posts; they’re hung from the arena’s ceiling. This is to prevent players from running into the goal post while going for a touchdown since the endzones are only eight yards in the league. The game has only 16 players on the field at once, versus 22 players in the NFL.  Another difference that fans can expect is to be right up close to the action and the players. Some fans are only inches away from the plays happening. The season is typically 10 weeks between the months of May and July.

Like most sports teams in the area, The Pirates took a hard hit when their season was canceled in 2020 due to COVID. However, this did not keep the organization from working on their playbook. In 2020, the Mass Pirates announced the team was joining the Indoor Football League (IFL). The IFL is a minor professional league, with teams spread out across the country. Just like the NAL, the IFL also has a 50-yard field, but the rules are slightly different.

In April of 2021, the Pirates announced they had signed Martavis Bryant, a former wide receiver for the Pittsburgh Steelers. Bryant joined the Pirates in preparation for his debut in the Canadian Football League, which he signed onto in January 2021. The Pirates also grabbed Terrance Williams in April of 2021, a former wide receiver for the Dallas Cowboys. With this offensive caliber in play, fans can count on seeing some incredible running plays and offensive catches.

Other times the Pirates made news during the offseason was when they announced their partnership with Chamber member Resinate, a Worcester-based medical and recreational marijuana dispensary. The company will be the presenting sponsor of the Massachusetts Pirates for their 2021 season. In a press conference hosted at their Millbury Street shop on April 15, Resinate CEO Peter DeCaro said, “We are very excited about our partnership with the Mass Pirates. Cannabis may provide these athletes with a natural alternative to the use of opioids for pain relief.” According to Resinate, they’re believed to be the first cannabis company to sponsor a professional sports team. In a recent interview with Worcester Chamber President and CEO Tim Murray on Chamber Exchange: The TV Show, Mass Pirates Director of Marketing Adrian Figueroa said, “The partnership makes perfect sense [in terms of] giving the option for our players to have alternative methods for pain relief. We are very open-minded here and want to make sure the guys have choices in terms of how they heal themselves mentally and physically.”

The Mass Pirates started the 2021 season off April 24 with a win against the Louisville Xtreme. Now, Worcester is welcoming them home on May 22 against the Spokane Shock. Pirates Co-Owner and President Jawad Yatim said ahead of the home opener, “We’ve been waiting a long time to be able to play in front of Pirate Nation again, and on the 22nd, we look forward to feeding off their energy and competing on Phoenix Field for the first time ever. It should be a great game against a great opponent and you won’t want to miss it.”

The Massachusetts Pirates are representing Worcester all over the country for the first time in their franchise. Let’s wish them the best of luck this year and hope they can bring back another kind of football championship to Massachusetts!

Looking to score some tickets? Head to their website at masspiratesfootball.com.

Virginia Murphy is the Membership & Affiliate Services Representative at the Worcester Chamber. She can be reached by email here. 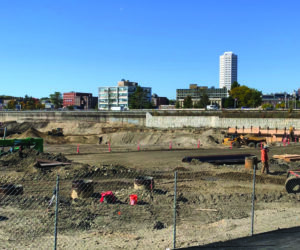