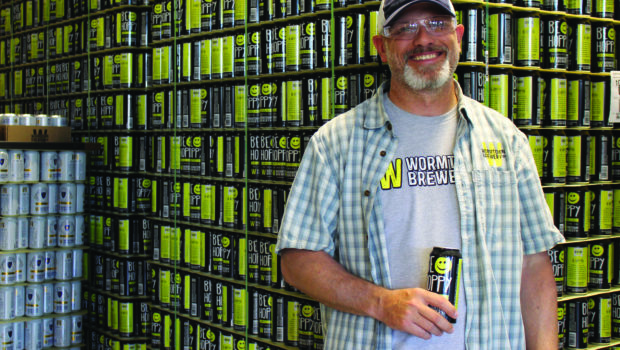 This story was originally published in the August 2019 edition of the Chamber Exchange newspaper. To receive hard copies of the newspaper, contact Director of Communications Emily Gowdey-Backus. In addition, a digital copy can be viewed here.

Born and bred Worcester-ites, ensuring every can is infused with the “triple decker attitude,” is essential to Wormtown Brewery’s leadership.

Yet 2019 marked a turning point for the Shrewsbury Street brewery. Two new brands were launched within six months of each other – one a limited batch lager, another an IPA addition to their year-round portfolio – and the team embarked on a marketing campaign.

Planned growth of the 9-year-old brewery is complimented by regional and national recognition.

Of those which submitted data, Wormtown ranked No. 112 top-producing craft brewery by the Brewer’s Association, an industry data tracker, in 2018.

The volume produced is equal to demand and recognition. Wormtown received silver in the 2012 Pro Am Porter World Beer Cup followed by being named the Grand National Champion at the U.S. Beer Open in 2014.

Just last year, Wormtown was twice recognized on the international stage with bronze at the 2018 World Beer Cup as well as silver at the Great American Beer Fest.

“I’LL HAVE THE NEW ONES” 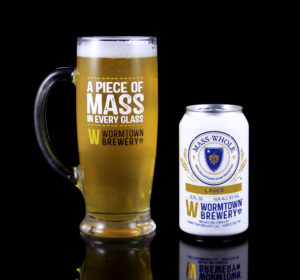 Don’t Worry, paired with Wormtown-staple Be Hoppy, was released to the public on Feb. 1. Calling its flavor a “muted to dank papaya,” Mr. Fields said the tropical IPA fits the profile of New England IPAs currently trending throughout the regional market.

From creating the brand in July 2018 to bottling the final product and setting the public release date, it took the brewery eight months to bring Don’t Worry to the market.

Prior to the public launch, Don’t Worry had been test-released to staff in November and at the Extreme IPA Festival in December.

The beer utilizes two hop varieties new-to-Wormtown and is 5.6 percent alcohol by volume and a 55 on the IBU scale.

“A very hazy offering,” he added, Don’t Worry exists on the opposite end of the IPA spectrum from Be Hoppy’s 6.5 percent ABV, but they balance each other as “natural siblings.”

Adding to the personal, hyper-local focus which helps curate a passionate, albeit comical, branding strategy, Wormtown brought Mass Whole – the first beer in the company’s lineup to consist of solely Massachusetts-grown ingredients – to market Jan. 1 in Worcester County followed by southeastern Massachusetts (Feb. 1) and Western Mass, New Hampshire, and Rhode Island in March and April.

“An internal project” aimed at crafting a lower-ABV, 12-ounce, six-pack lager – in fact, Mass Whole is 4.2 percent ABV – Mr. Fields said once released in the taproom, “it became a really good-selling beer … much more than we had anticipated.”

Currently a limited release, Mass Whole represents an evolving brand which has previously been released in multiple iterations – everything from a farmhouse, to a stout and a pale ale – since its founding in 2010. 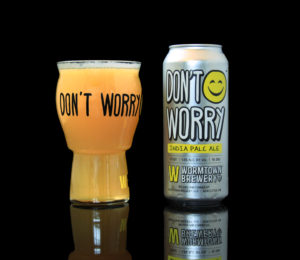 The statewide moniker, he said, is “a badge of honor” worn by Massachusetts residents and lends well to the local nature of the beer.

Such examples of brazen yet relatable branding, said Mr. Fields, coupled with a local commitment, has helped Wormtown standout among an increasingly-crowded statewide craft brewing scene.

In addition to the two 2019 releases, and within the past eight months, Wormtown released its first TV and billboard advertisements.

Both traditional advertising models, Mr. Fields said the decision seemed “very unnatural” for the Wormtown team and a “step outside [their] comfort zone.” However, at its core, the campaign harkens back to the essence of Wormtown’s branding – quality beer with a Central Mass focus.

A partnership with Phantom Gourmet saw Wormtown beer with local food while one of the billboards suggests drivers “Honk If You’re a Mass Whole.”

Expanding reach, by “building momentum on the periphery” of the brewery’s current market and expanding after only ensuring said success is sustainable, said Mr. Fields, has slowly but steadily increased awareness of Wormtown and its following.

Examples of the success of this strategy are the June announcement of the second Wormtown taproom, at Patriot Place, as well as partnering with the Worcester Red Sox as the team’s official hometown brewery.

The Wormtown team also points to recent sales as evidence of the brewery’s sustainability when it comes to flavor and branding. Once capped by a 10-barrel brewing system capable of producing 500 barrels of beer per year, today, their 30-barrel system produces 50,000 barrels per annum.

As of early July, the brewery was experiencing a 35.4 percent increase in sales year to date, per in-house data. “That’s coming off of a year in which we were up 23 to 24 percent from the year prior,” added Mr. Fields.

Wormtown is sold in more than 2,000 locations throughout the Commonwealth as well as Rhode Island, Connecticut and, as of this year, New Hampshire.

Not only is their hyper-local focus zeroed in on ingredients necessary to make beer and their consumer, Wormtown has a philanthropic hand in the local community as well.

Any donations given during free tours of the brewery are sent to the Worcester County Food Bank and Veterans Inc. The Worcester-based nonprofit veterans support also benefits from Wormtown’s participation in the annual Black Ale Project which sees breweries produce a beer to benefit similar groups across the country. Each year, one dollar from every Wormtown Black Ale Project pint is donated to Veterans Inc.

Together with Wachusett Brewery, Wormtown produced a beer and hosted events benefiting Ava Roy, daughter of the late Worcester firefighter Christopher L. Roy, raising more than $50,000 through their combined efforts.

The walls of the brewery are even lent out to artists associated with Worcester Pop Up to showcase the city’s commitment to the arts. Every two months, a new mural is painted in the taproom and the public is invited to watch the installation during a “Paint and Pint” night.

RECOGNIZING THE IMPACT OF CRAFT BEER

Of the local craft beer industry, Mr. Fields is glad to see the “energy, effort, quality, and passion” being funneled into a variety of new beverages, but more excited to know what that means for the City of Worcester and the state overall.

According to the Brewer’s Association, in 2010, when Wormtown launched, it was one of 81 craft breweries in the state. Today, there are 185 in the Bay State with 39 more expected to launch before 2020.

The draw of the industry was measured in 2017 when more than $1.83 million was generated in economic impact by craft brewers making Massachusetts the 14th-strongest such economy in the nation.

From the original four-person team to the 30 full-time and 10 part-time employees who make up the 2019 staff, Wormtown has grown into its own – a well-respected economic engine reflective of the ongoing development in the Heart of the Commonwealth.

“The popularity of craft beer,” said Mr. Fields, “is helping the city realize its potential.”

The Chamber’s Oct. 17 Business After Hours will be held at Wormtown Brewery. Stop in to chat with Mr. Fields about his recollections of a changing Worcester and how craft beer has played a role.

Emily Gowdey-Backus is the director of communications at the Worcester Regional Chamber of Commerce. She can be reached via email.

OPED – Will Wormtown Be the First in a Wave of Local ‘Brewstilleries’?