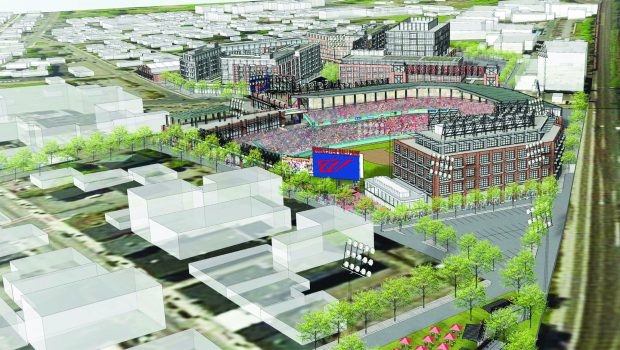 “If you build it, they will come.” This spin on the iconic Field of Dreams line may have been the hope of city leaders when they set out to build Polar Park, and so far, their wish is coming true.

When plans to relocate the Boston Red Sox’s Triple-A affiliate team in Worcester were agreed to back in 2018, Madison Properties was set to transform the land surrounding the ballpark with mixed-use development projects.

Since the initial announcement though, the Canal District has attracted more interest from other developers looking to capitalize on the heightened attention in the already-vibrant neighborhood.

Even prior to Polar Park, Boston-based developer Madison Properties had experience working in Worcester. In the early 2000s, they bought land at the former U.S. Steel factory on Route 146, ultimately developing it into what is now the Sam’s Club and Walmart shopping center. So when the company’s president Denis Dowdle returned in 2017 for lunch with Worcester Regional Chamber of Commerce President and CEO Tim Murray, he saw with his own eyes why everyone was so abuzz about a so-called “Worcester Renaissance.”

Just from walking around the city that afternoon, Mr. Dowdle said, “I understood the transformative nature of what was happening downtown. I drove back to Boston and said, ‘You know, it would be fun to try and take advantage of that momentum being created in the city.’” A call to property owner Wyman-Gordon revealed there was a fairly large piece of vacant land in the city’s Canal District and Green Island neighborhood.

“My bet at the time was: if I was able to buy a big chunk of land in downtown Worcester that I didn’t have any immediate plans for, we could do something good with it over the long term,” Mr. Dowdle recalled. He said Madison Properties had the land under contract and was well on its way to acquiring it when, right before closing, the concept of the Pawtucket Red Sox relocating to Worcester came up.

Working with the city of Worcester, the Commonwealth of Massachusetts, the Red Sox organization, and “all the powers that be,” Mr. Dowdle’s company came to this master deal to develop the ballpark district.

Since the initial game plan was unveiled, things have changed due to the unprecedented coronavirus pandemic. However, Mr. Dowdle said “all along” Madison Properties had “built some flexibility into the master plan to allow for change” and “tried to diversify the types of buildings” in order to create balance.

As of late February, here’s where their plans and progress stands. Right now, the company is putting a multi-story office building outside of left field with a below grade parking garage. They’ll wait to do the rest of the vertical construction on the office building until there’s more tenant interest so they can respond appropriately to market demand.

Across the street, they hope to break ground on their first of two planned residential buildings during the first half of this year. The building will consist of 228 market-rate apartment units and street-level retail space. It will run from the corner of Madison and Washington streets to the corner of Madison and Green Island Boulevard. As far as the second proposed housing development (potentially 125 units) goes, Mr. Dowdle said they don’t have any immediate plans to start construction on that and will wait to see how the first residential building comes along before progressing.

On the other side of Green Island Boulevard, the developer originally contemplated two hotels in one building — one would be a boutique, and the other more of a limited service hotel. Now, Mr. Dowdle said they’re envisioning two hotels in two separate buildings and are waiting for the hospitality industry to bounce back following the pandemic’s devastation before they talk about bringing on another hotel in Worcester. Construction on the first hotel is “not imminent,” Mr. Dowdle said, but “we still think, long term, it’s a good hotel site.” He added the site for the second hotel could take on different forms as well, depending on what market demand is for commercial building use.

Behind the hotel sites, construction is currently underway on a 340-space parking garage being built by the city and leased to Madison. It should be complete by this fall.

Lastly, between that garage and the new Green Island Boulevard, Madison Properties is actively seeking tenants for their proposed life sciences building. Mr. Dowdle said they’re particularly excited about this development “because we think the Worcester life science economy is growing and there’s more need for lab space. So we think we’ve got an interesting building footprint that can accommodate a lot of different life science tenants.”

When asked about a total, “all said and done” cost of investment on these mixed-use developments, Mr. Dowdle said the company hadn’t yet tabulated one and preferred to look at it on a project-by-project basis because the situation is fluid. According to application materials filed with the city and state, the company’s first phase is estimated to be $89 million.

Before the brand new ballpark could even open, it had already caught the eye of others like Boston Capital. In January, the Boston firm’s development arm formally announced its plans to acquire the Table Talk Pies site on Washington Street and turn it into a mix of residential and retail space. Table Talk Pies is moving headquarters and factory out of Kelley Square to the South Worcester Industrial Park area.

Though still in the early stages of formulating a master plan, Boston Capital has said its development will eventually include a mix of affordable, workforce, and market-rate housing, as well as retail space.

Construction on phase one of development could start in 2022. That will be a six-story, 80,000 sq. ft., 80-unit building consisting of one, two, and three bedrooms, which will all be affordable housing. Boston Capital Development won’t only be transforming the roughly four-acre plot into housing and retail; it is also establishing a pedestrian connection from Green Street to Polar Park by re-instituting Spruce Street.

According to Rich Mazzocchi, managing director for Boston Capital Development, the company’s initial attraction to Worcester came simply from looking at it as the second largest city in New England and from seeing all the momentum with recent public and private investments. But, the company was also responding to what they identified as a “severe shortage” of housing in many communities across the Commonwealth and particularly in Worcester — the focal point of the Chamber’s 2019 “Worcester for Everyone” regional housing and economic study.

“We saw an opportunity to play a part in creating more affordable housing and this particular site really lends itself to mixed income and mixed use,” Mr. Mazzocchi said. “So, we expanded upon our original development plan, which may have just included affordable housing had it been a smaller site within the city.”

For the project’s architect, Dan Benoit of Benoit Design Group and formerly of the city of Worcester’s development office, the opportunity to do new construction on a large block of land downtown is rewarding. “Just the opportunity to reshape this section of the city, doing what we’re doing with adding the street and really changing the skyline […] it’s been a great opportunity all around,” Mr. Benoit said.

He added that Boston Capital’s plan to save the original Table Talk Pies building is gratifying, too, because he gets to be a part of efforts to preserve a piece of Worcester history while also looking forward to the future and helping redefine that area of the city.

At the time of writing, Mr. Mazzocchi wasn’t able to provide an approximate total investment on the development project, as they were still in the early planning stages. The first phase is estimated to be around $36 million, and he expects Boston Capital’s projects to “be multiple phases over several years of development.”

Similar to Boston Capital, Polar Park served as the main catalyst for Churchill James’ decision to develop in the area, but not the only reason.

With their office based in Worcester, Partner Thomas Keane said the company had been “circling the wagons on buying some commercial real estate in Worcester for a long time,” and the announcement of the ballpark was “just a way to kick us in the right direction and kind of land on a neighborhood.”

Churchill James’ mixed-use development projects on Green Street consist of residential, retail, commercial, and office plans. Because they own part of a bowling franchise, they’ll be bringing candlepin bowling back to its place of origin with a 12,000 sq. ft. bowling alley and a flatbread pizza restaurant. On top of that, there will be 20,000 sq. ft. of retail and restaurant space available. Mr. Keane anticipates about 3,000 sq. ft. of office or other commercial use space, as well as some interior parking.

Though Churchill James’ initial goal was to deliver 60 to 80 units of housing, they’ve added to the scale of their residential building, now aiming to create between 200 and 300 studios, and one and two bedroom apartments. An expected 60% of the units, and some amenities decks, will overlook the ballpark.

Mr. Keane also cited the Chamber’s 2019 housing study as a key factor in the company’s decision to increase the size of their residential building. He stressed that, while Churchill James “wouldn’t be here without the park,” when it comes to the sheer scale of their development, after looking at the housing study extensively with their development partners and consultants, they thought the area could bear a lot more housing. “That’s really what pushed us to make the project bigger,” he said.

Moreover, Mr. Keane pointed to other projects in the city including Allen Fletcher’s Kelley Square Lofts, 145 Front Street, and the Courthouse Lofts as proof of the demand for housing in Worcester and evidence of success.

Churchill James expects to break ground in early 2022. Things will fluctuate, but as of now, they estimate a total investment of $110 million.

Although their projects vary in use, size, and cost, there is one thing all the developers have in common: they’re all working in the Canal District and Green Island neighborhood with the vision of adding to and complementing the neighborhood’s vibrant culture — not altering it.

Having sat in on enough of the meetings between the city and Red Sox executives before the team officially decided on a move, Mr. Dowdle said, “I can 100% assure you that the vibrance of the Canal District was a huge factor” in their decision-making process. “The team and the club and the ballpark were not going to need to create a neighborhood; they were fitting into a neighborhood.”

The concept served as a guiding principle while the stakeholders spent a year-plus developing the master plan. Mr. Dowdle said, “The thought process” behind this development happening was “to fit in and complement the district — not compete or be independent from the district.”

Altogether, the hundreds of new housing units being planned mean possibly more than a thousand new people could be calling the Canal District “home.” With more people living in the area; more people working in the area at newly-developed offices and life science labs; and more people visiting the area for new restaurant, retail, and entertainment opportunities; the goal is to expand on the neighborhood’s walkability and density while adding to the support for existing businesses and the local economy.

Dominique Goyette-Connerty is the Director of Communications at the Worcester Regional Chamber of Commerce and can be reached by email here.

This story was originally published in the March 2021 edition of Chamber Exchange: The Newspaper,a quarterly publication of the Chamber. All newspaper editions are archived here. 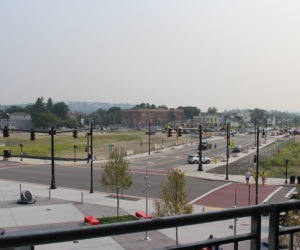