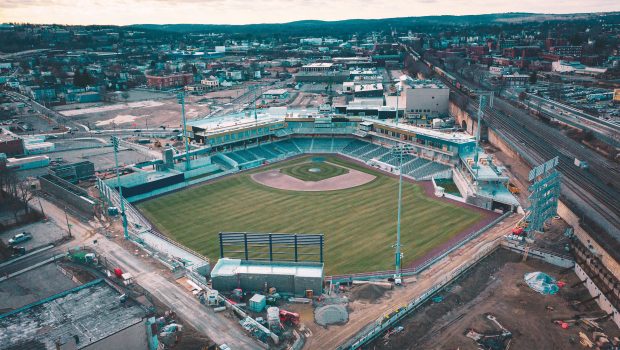 The Worcester Red Sox (WooSox) have announced that its inaugural season at the new Polar Park field will begin this May. The decision followed speculation over when and how Minor League Baseball would take form this year amid the ongoing coronavirus pandemic. The 2020 MiLB season was canceled due to COVID-19.

Work on the Triple-A affiliate team’s new stomping grounds started in summer 2019 under an already-aggressive construction timeline with a scheduled completion date of April 2021.

Despite weeks of construction delays due to COVID-19 safety protocols, the ballpark is still on target to open for spring.

The club’s home opener was previously set for April 13, until Major League Baseball informed minor league teams they were taking pandemic precautions and delaying the start of the Triple-A season by at least a month. Now, the WooSox has its sights set on a May 11 debut on Polar Park’s diamond, kicking off a 12-game homestand. The team will open the season on the road versus the Buffalo Bisons May 4.

Massachusetts Gov. Charlie Baker’s Feb. 25 announcement that the state could potentially move to Phase Four, Step One of reopening starting on March 22 means the team would be able to invite fans in the stands initially at 12% capacity. With Polar Park’s 9,508 seats — a nod to Worcester’s 508 area code — the venue will likely be limited to 1,140 people.

Rest assured, the Worcester Red Sox remain committed to inviting everyone to experience the ballpark and catch a game, but even in a non-COVID atmosphere, that process takes more than one day. Team President Dr. Charles Steinberg said, “We believe that everyone will get to partake in the opening of the park, it’s just a question of how many days or weeks or months constitute the opening.”

Building a ballpark from scratch in under 24 months is a tall order for any group of construction workers, but doing so in the face of a global pandemic is even more challenging. “It’s one thing to have a tight timeframe to build something as complex and large scale as a project like this, but to add in a seven-week shutdown […] it’s such a credit to all the folks working on this,” said Worcester Red Sox Director of Ballpark Planning Mr. Bart Harvey. “We’d be nowhere without them.”

Gilbane Building Co./AECOM Hunt, a joint venture, served as construction manager of the Polar Park project, managing and overseeing the vast number of trade subcontractors on the job.

Despite the unexpected pandemic conditions and a job that mostly doesn’t afford the luxury of working from home, Mike O’Brien, vice president and Massachusetts business unit leader at Gilbane Building Co., says dedicated workers rose to the occasion to make the park possible. “This team has worked together seamlessly through the unprecedented challenges of the COVID-19 pandemic. Through it all, they have been solution-oriented and forward-looking, persevering with an unwavering goal of meeting the project schedule for Opening Day.”

At its peak, as many as 250 workers were on site to build Polar Park. With such a significantly-sized project, the Worcester Redevelopment Authority and city of Worcester set forth workforce diversity goals. They asked Gilbane/AECOM Hunt and its subcontractors to have a workforce consisting of at least 25% Worcester residents, 15.3% people of color, and 6.9% females. 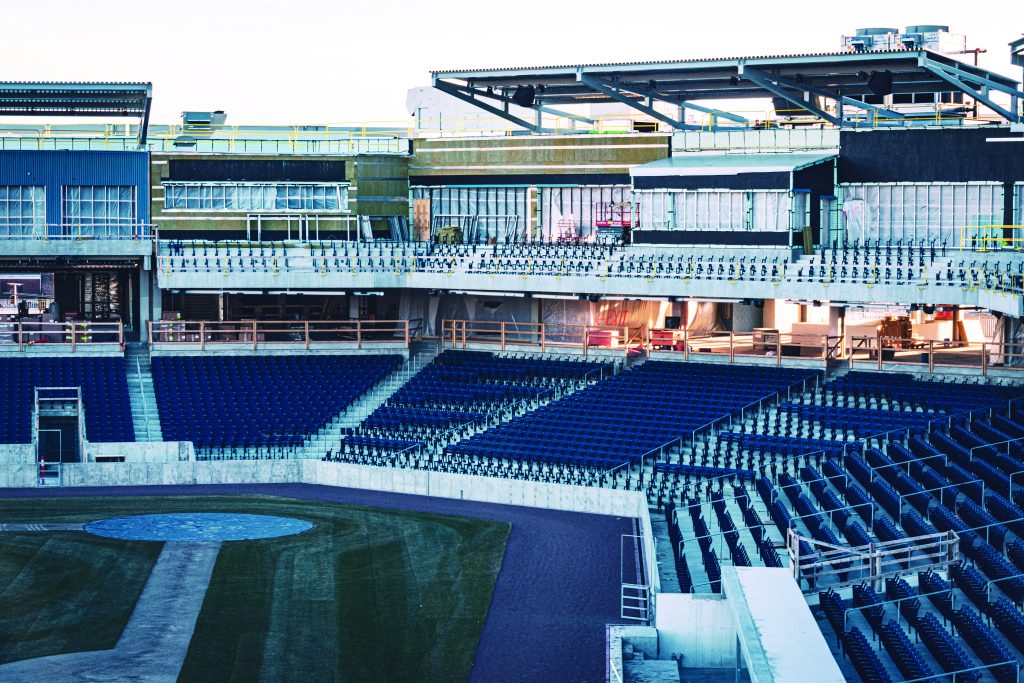 Polar Park, the new home of the Worcester Red Sox, is set to open in May of 2021.

One group proud to regularly meet and exceed those goals are the electricians on the job. According to the International Brotherhood of Electrical Workers (IBEW) Local 96 Worcester’s Business Manager Tom Maloney, “Of all the building trades on the project, electricians have the most diverse workforce […] so, we’re very proud to have been able to do that.”

The union’s signatory contractor on the job, Chamber member Ostrow Electric Co., had up to 65 electricians on site at any given time. As of early February, the company was far exceeding the set goals, with a workforce made up of 36% Worcester residents, 38.4% people of color, and 8.11% women.

Operating in Worcester since 1939, Ostrow Electric’s Vice President Sam Ostrow said having a local, diverse workforce was particularly important to the company. “As a Worcester resident, I want people who live here or in the immediate surrounding areas to be working in the city. Those are the people who will be going out afterwards and spending money. And that’s how you build a local economy.”

To secure the electrical work at Polar Park, the IBEW Local 96 marshalled resources and took a regional approach with the union’s Boston chapter, Local 103, in order to be more competitive in its bid. Together, Mr. Maloney and Local 103 Business Manager Louis Antonellis were able to win the project for union workers. All electricians on the job were ‘Code of Excellence’ qualified — a safety and standards credential, which can only be obtained through the IBEW.

Of course, with any project of this magnitude, that safe and high-quality electric work is integral. From primary power systems and fire alarms, to field lights and audio visual communications like TVs and the scoreboard — you name it, Ostrow electricians did it. “Really from the ground up, if it was electrical in any way, we were intimately involved with it,” said Mr. Ostrow.

Especially with their rich Worcester history — dating all the way back to installing the iconic neon sign at George’s Coney Island — being part of creating this symbol of a next chapter in the city is immensely satisfying. “There’s been a real sense of civic pride in this building. And you can feel that on site as well,” Mr. Ostrow said. “There’s just a real feeling that this is something we’re building for everyone to enjoy […] And it’s great driving through 290; It’s part of the skyline now.”

As for Gilbane Building Co. — which has completed more than 20 projects in Worcester since 1950 including several tasks at WPI, the Worcester Recovery Center and Hospital, and the Worcester Trial Court Complex — Polar Park is uniquely special. “There’s really nothing like building a ballpark, though, given its lasting mark on a community,” Mr. O’Brien said. “We are thrilled and privileged to be part of this legacy project, one that will bring joy to thousands of people for decades to come.”

Throughout construction and as the team has geared up for the move, it’s safe to say the WooSox organization has left no Worcester story stone unturned.

From the Smiley Ball mascot as a tribute to Worcester native and smiley face creator Harvey Ball, to the heart-shaped field lights as recognition of the ‘Heart of the Commonwealth’ nickname, the retiring of jersey number six to honor the six Worcester firefighter lives lost in the tragic 1999 cold storage fire, and the 1880 Worcester logo in cast iron on the ends of seat rows, the team has covered all the bases.

Ever since a move to Worcester became a serious possibility, “The people of the city and of the greater Worcester area have just emerged as the story,” Dr. Steinberg said. “Worcester has a marvelous treasure trove of stories, and a ballpark and ball club can be a marvelous mechanism for storytelling. That’s why we’ve been bringing so many of these elements along, because we’ve been listening, and we’ve been learning […] It’s all a dialogue with the people of the city and the region.”

Another element to this story of “baseball romance,” as he calls it? The team’s hitting coach. When the WooSox take the field at Polar Park in May, it will be somewhat of a homecoming for former All-Star catcher and Boston Red Sox Hall of Famer Rich Gedman. Mr. Gedman grew up on Worcester’s Lafayette Street, just a couple blocks away from the new minor league ballpark he’ll be coaching at.

After years of built up excitement around Polar Park, it appears COVID-19 won’t allow for the grand reveal and big celebration which would have been planned initially. But in the eyes of Worcester Red Sox leadership, a phased-approach to the park’s opening won’t necessarily be a bad thing either.

“What we’ve tried to do with Polar Park is have a story built into every corner,” said Mr. Harvey. “Hopefully, with it being more spread out and less crowded, our fans who we’re welcoming for the first time will really get to interact with the facility and see everything it has to offer.” He adds that fans can expect to find little hidden surprises around the park like display cases and other projects over time.

While the team would love to open the gates to nearly 10,000 people, for now, they’re just excited for the opportunity to play ball and share the park — a true team effort — with at least some of the supportive community, which rallied behind their arrival.

“The excitement we have is inspired by the excitement that comes our way from the people of the city and the region,” Dr. Steinberg said. “This city has been exceptional in wearing its heart on its sleeve, and as you’ve seen, we embrace that heart.”

Dominique Goyette-Connerty is the Director of Communications at the Worcester Regional Chamber of Commerce and can be reached by email here.

This story was originally published in the March 2021 edition of Chamber Exchange: The Newspaper, a quarterly publication of the Chamber. All newspaper editions are archived here.