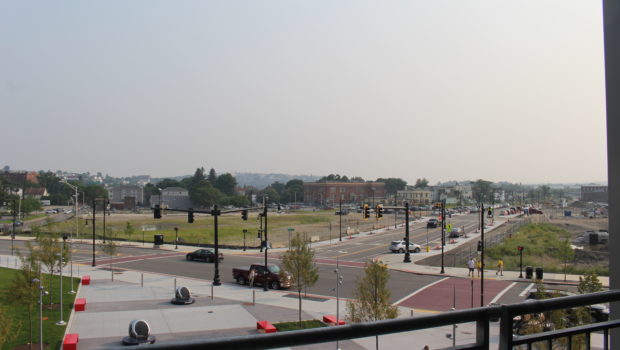 Next time you go to Polar Park or visit the Canal District, take a good look around.

While the ballpark currently stands alone, in just a few years’ time, it will be the lynchpin of a multi-million-dollar campus of modern apartment buildings, offices, laboratories, and hotels.

At a ceremonial groundbreaking on July 21, Denis Dowdle, president of Boston-based real estate firm Madison Properties, announced the first develop-ment in the Polar Park campus (other than the ballpark itself) would be going up starting next year.

During the groundbreaking ceremony, which was held at Polar Park’s con-course, each speaker praised the coordination it took to pull together a baseball park and a mixed-use campus in order to transform a series of overgrown parking lots and dirt piles into a district of the city with a new lease on life.

Before Polar Park was a concept, Madison Properties already had plans to build new properties at Madison Street (no relation) in the Canal District. Once the news
broke that the Pawtucket Red Sox were coming to Worcester — a move orchestrat-ed by Worcester Regional Chamber of Commerce President and CEO Tim Murray along with City Manager Augustus and other local leaders — Mr. Dowdle began to coordinate with them on planning a mixed-use campus to complement the ballpark.

Madison Properties already had experience with Worcester, having built the Walmart shopping plaza off Route 146 years ago. But once returning to Worcester and seeing firsthand the transformation the city’s downtown area had undergone in the past few years, Mr. Dowdle’s interest and enthusiasm for investing in the Heart of the Commonwealth was reignited.

“Nothing attracted the team and us more to Worcester than the Canal District,” said Mr. Dowdle in a previous interview for Chamber Exchange: The Newspaper, praising the neighborhood’s cultural vibrancy.

In 2019, Madison Properties purchased parcels of land on Madison Street which belonged to aerospace manufacturer Wyman-Gordon. Now, plans are in place to construct two residential buildings; two hotels; and a six-story, 200,000 square foot laboratory and office building. A 340-space municipal parking garage is currently being built by the city in the same space. Madison Properties is also building a six-story office building immediately behind left field at Polar Park.

SOMA is planned to have a mix of one- and two-bedroom apartments, with a smattering of three-bedroom apartments to test the market for family-sized units in the city. Mr. Dowdle noted that his firm hopes WooSox players sign season-long leases with the space, and that they are targeting young professionals as tenants. Amenities at the living space will include outdoor fire pits, a pet washing station, and common areas for meetings.

The first residential building is estimated to be an investment of $89 million.

Lt. Gov. Polito and Undersecretary Ashley Stolba of the Massachusetts Ex-ecutive Office of Housing and Economic Development both expressed their ex-citement for the Madison Properties developments, especially as it pertains to building more housing. “We need 200,000 units of housing of all kinds all across our Commonwealth,” said the Lieutenant Governor. “I can’t underscore enough how important it is for other communities to look at Worcester and understand their housing needs,” she added.

The Worcester Chamber conducted a 2019 housing study which confirmed this gap and proposed further investment in housing developments as key. With close to 1,000 new housing units being constructed between proposed projects such as the Madison Properties developments, Boston Capital’s Table Talk Lofts, Wood Partner’s Alta Seven Hills, and Churchill James’ The Cove, Worcester has made great strides to close the housing gap with both affordable and market-rate apartments.