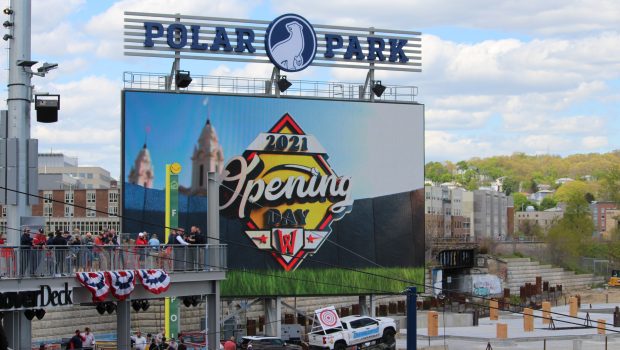 It was a win for Worcester in more ways than one.

On a sunny and mild spring afternoon in the Canal District, the Worcester Red Sox (WooSox) secured a win over the Syracuse Mets in their home opener game at the brand-new Polar Park on Tuesday, May 12.

Their inaugural season started on the road on May 4 in Trenton, New Jersey against the Buffalo Bisons after Major League Baseball delayed the minor league season start date due to COVID-19. By the time the WooSox made it back home to Worcester, the team had a losing record of two-and-four but were determined to turn things around as they debuted at Polar Park.

After trailing for much of the beginning of the game, the WooSox applied the pressure in the seventh inning with back-to-back home runs off the bats of

Josh Ockimey and Boston’s third-ranked prospect Jarren Duran – his second of the game.

And they weren’t the only ones to go bridge during the afternoon. A total of six homeruns were crushed during the opening day game; four were courtesy of the home team. If there were any doubts about it before, we now know with confidence the WooSox’ home field will be a hitters’ ballpark.

Those seventh inning bombs put the boys in red and white up 6-4. Right-handed reliever and two-time World Series Champion with the Boston Red Sox (2013 and 2018) Brandon Workman entered in the top of the eighth inning to make his debut for Worcester, allowing one run before pitching his way out of a bases-loaded jam. The Red Sox organization had just signed Workman to a minor league deal the week prior, after he was designated for assignment by the Chicago Cubs.

The Worcester Red Sox went on to score two more runs in the end of the game, giving them the comfortable, three-run cushion lead they needed to wrap with a win. Final score was 8-5, marking a perfect end to the perfect day. 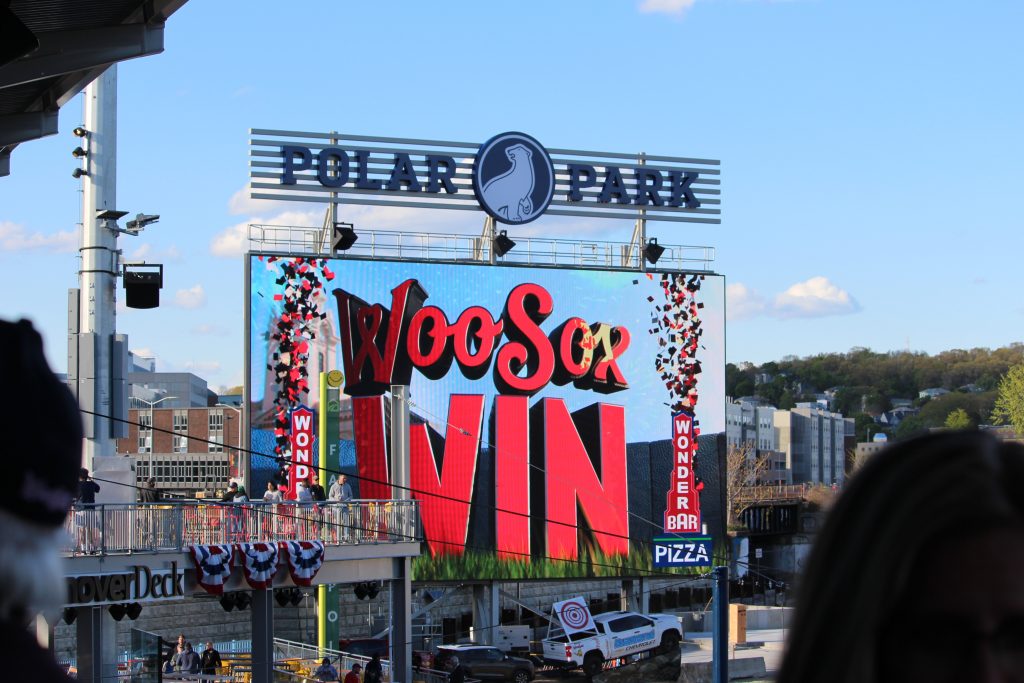 The left field video board at Polar Park celebrates the first home win for the Worcester Red Sox on opening day. Photo by Dominique Goyette-Connerty.

A Figurative Home Run for Worcester

But the victory over the Mets wasn’t the only Worcester win of the day. It was all smiles all around as fans from near and far were welcomed to the new ballpark for the first time ever.

Due to coronavirus restrictions at the state level limiting outdoor stadiums and ballparks to 25% capacity, the roughly 9,500-seat Polar Park was only able to admit a couple thousand fans to experience the opening day festivities. But, one would have thought there were tens of thousands in attendance upon hearing the crowds roar. Every play in favor of the home team — from a simple pop-up fly or an easy first base out, to double plays and balls off the aptly-named Worcester Wall – resulted in cheers that seemed to echo throughout the city. Simply put, the fans were electric.

The organization went all out with the pregame ceremony to properly christen the new ballpark. There was no shortage of special guests on deck for the big day. From elected officials and community leaders, to hall of famers and organization executives, there were a number of VIPs on hand to help celebrate the historic occasion for Worcester and the city.

Six-time Grammy Award winner and Rock and Roll Hall of Famer James Taylor joined his 20-year-old son Henry in singing a beautiful rendition of the National Anthem. Taylor is a Massachusetts native. Governor Charlie Baker and Shrewsbury native Lieutenant Governor Karyn Polito participated in the ribbon cutting ceremony and traditional first pitches. They were joined on the field by Boston Red Sox greats and Baseball Hall of Famers Pedro Martinez and Jim Rice. Plus, former Boston Celtics point guard Bob Cousy came out to deliver the iconic words so many Worcester residents had longed to hear: “play ball!” The 92-year-old was a standout in his time at the College of the Holy Cross and has lived much of his life in Worcester where he currently resides.

All the while, Worcester Red Sox Owner and Chairman of the Board Larry Lucchino and legendary ballpark architect Janet Marie Smith were around throughout the day admiring their work and that of the hundreds of men and women from the construction trades that labored on the project. The team also paid tribute to fallen Worcester firefighters during the pregame ceremony, selecting Ava Roy, daughter of the late firefighter Christopher Roy, to deliver the game ball to the mound. Moreover, the Worcester Red Sox have already retired jersey number six in honor of the “Worcester Six” – the six firefighters who lost their lives battling a cold storage fire in 1999.

In the last edition of Chamber Exchange: The Newspaper, we wrote about how Polar Park had already attracted a handful of developers to the area who wanted to build housing, hotels, office space, retail space, restaurants, and other mixed-use projects. These include Madison Properties’ multiple sites, Boston Capital’s plans for housing and retail space in the former Table Talk Pies headquarters, and Churchill James’ vision for mixed-use developments on Green Street including more housing and a flatbread pizza restaurant with a candlepin bowling alley.

Some of those projects are already underway, while others are still in the planning stages. Nonetheless, what was once a brownfield not too long ago has been transformed into a “green field,” if you will, with Polar Park and plenty of surrounding developments. 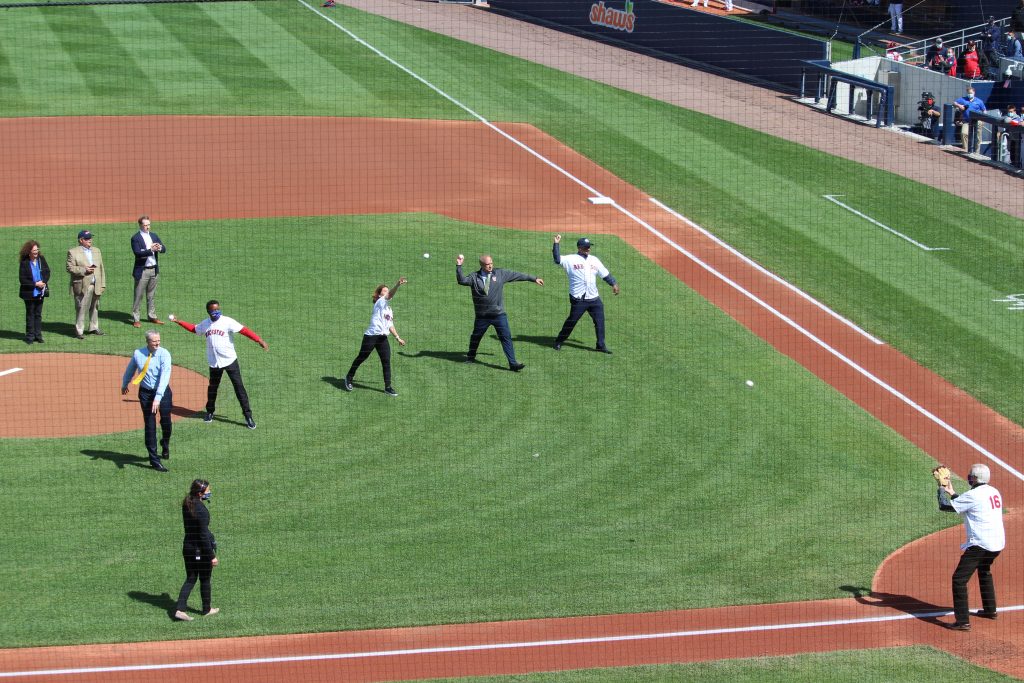 As exciting as these new establishments are, they’re coming into the Canal District to be part of an already-existing, vibrant neighborhood – not to create a totally new one. With the brand-new ballpark generating buzz and attracting thousands of people to each home game, businesses in that area are bound to benefit from increased foot traffic, too.

Located inside the Worcester Public Market, Worcester Regional Chamber of Commerce member Alan James Co. creates handmade leather goods. Just a stone’s throw from Polar Park and with prime real estate in the public market, Owner and Designer Bill Laudon says he’s thrilled to essentially have a front-row seat to the action and the opportunity for more exposure to potential customers. “Alan James Co. couldn’t be more excited about the ballpark and the continuous growth of our beloved city. To have a space where I can share my gift and build beautiful, new, and exciting leather pieces right in the heart of it all – it’s beyond special to me […] Worcester is my home. My family and myself at Alan James Co. are proud to be a part of something greater than us.”

Restaurants, bars, and other eateries in the area are ripe with potential for business as well, likely to see an influx of customers before and after games looking to grab a bite to eat.

In this sense, from the perspectives of both the Chamber and local tourism organization Discover Central Massachusetts (DCM), Polar Park has already proved to be and will continue to be an economic driver for the region.

“Tourism is about more than families going on vacation; It represents a business sector that brings millions of dollars into the region,” said DCM Executive Director Monique Messier. “From the newly-opened Polar Park to the hundreds of businesses and destinations throughout the region, Central Massachusetts attractions bring smiles to thousands of faces each year.”

“This was a huge win for the City of Worcester. We have a beautiful, new ballpark and a top-notch Triple-A baseball team affiliated with the iconic brand of the Boston Red Sox which is known across the globe,” said Worcester Chamber President and CEO Tim Murray. “Polar Park will create memories for hundreds of thousands of visitors annually, adding significantly to the local economy.”